Enforcing Human Rights of Palestinians in the Occupied Territory 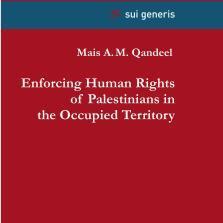 ScienceOpen
Buy book Bookmark
There is no author summary for this book yet. Authors can add summaries to their books on ScienceOpen to make them more accessible to a non-specialist audience.

Published under Creative Commons Attribution NoDerivatives 4.0 International ( CC BY-ND 4.0). Users are allowed to share (copy and redistribute the material in any medium or format), as long as the authors and the publisher are explicitly identified and properly acknowledged as the original source, and the original work is not modified.

Swiss National Science Foundation (SNSF) 10BP12_183672
Data availability: The datasets generated during and/or analysed during the current study are available from the corresponding author on reasonable request.