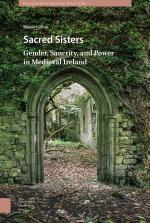 Sacred Sisters focuses on five saints: the four female Irish saints who have extant medieval biographies (Darerca, Brigid, Íte, and Samthann), and Patrick, whose writings -- fifth-century Ireland’s sole surviving texts -- attest to the centrality of women in Irish Christianity’s development. Women served as leaders and teachers, perhaps even as bishops and priests, and men and women worked together in a variety of arrangements as well as independently. Previous studies of gender in medieval Ireland have emphasized sexism and sex-segregated celibacy, dismissing abundant evidence of alternative approaches throughout the sources, including in the Lives of Ireland’s female saints. Sacred Sisters places these generally marginalized texts at its center, exploring their portraits of empowered, authoritative, compassionate women who exemplified an accepting and affirming ethics of gender and sexuality that would be unusual in many mainstream Christian movements in the present day, let alone in the Middle Ages.

Maeve Callan, Associate Professor of Religion and Women's and Gender Studies at Simpson College, received her Ph.D. in Religion from Northwestern University and her M.Phil. in Women's Studies from Trinity College Dublin. She is the author of The Templars, the Witch, and the Wild Irish: Vengeance and Heresy in Medieval Ireland.