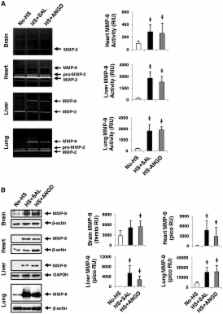 Shedding of the matrix metalloproteinases MMP-2, MMP-9, and MT1-MMP as membrane vesicle-associated components by endothelial cells.

Giulia Taraboletti,  Sandra D'Ascenzo,  Patrizia Borsotti … (2002)
Production of matrix-degrading proteases, particularly matrix metalloproteinases (MMPs), by endothelial cells is a critical event during angiogenesis, the process of vessel neoformation that occurs in normal and pathological conditions. MMPs are known to be highly regulated at the level of synthesis and activation, however, little is known about the regulation of MMP secretion by endothelial cells. We found that cultured human umbilical vein endothelial cells shed vesicles (300 to 600 nm) originating from localized areas of the cell plasma membrane, as revealed by ultrastructural analysis. Normal and reverse zymography, Western blot, and immunogold analyses of the vesicles showed two gelatinases, MMP-2 and MMP-9, in both the active and proenzyme forms, the MT1-MMP proenzyme located on the external side of the vesicle membrane and the two inhibitors TIMP-1 and TIMP-2. Serum and the angiogenic factors, fibroblast growth factor-2 and vascular endothelial growth factor, stimulated the shedding of MMPs as vesicle components. Shedding the vesicle was rapid, as it was already completed after 4 hours. Addition of shed vesicles to human umbilical vein endothelial cells resulted in autocrine stimulation of invasion through a layer of reconstituted basement membrane (Matrigel) and cord formation on Matrigel. We conclude that endothelial cells shed MMP-containing vesicles and this may be a mechanism for regulating focalized proteolytic activity vital to invasive and morphogenic events during angiogenesis.

JoAnn Trejo,  Buxin Chen,  Michael Dores … (2010)
The family of G protein-coupled receptors (GPCRs) constitutes the largest class of signalling receptors in the human genome, controlling vast physiological responses and are the target of many drugs. After activation, GPCRs are rapidly desensitized by phosphorylation and beta-arrestin binding. Most classic GPCRs are internalized through a clathrin, dynamin and beta-arrestin-dependent pathway and then recycled back to the cell surface or sorted to lysosomes for degradation. Given the vast number and diversity of GPCRs, different mechanisms are likely to exist to precisely regulate the magnitude, duration and spatial aspects of receptor signalling. The G protein-coupled protease-activated receptors (PARs) provide elegant examples of GPCRs that are regulated by distinct desensitization and endocytic sorting mechanisms, processes that are critically important for the spatial and temporal fidelity of PAR signalling. PARs are irreversibly activated through proteolytic cleavage and transmit cellular responses to extracellular proteases. Activated PAR(1) internalizes through a clathrin- and dynamin-dependent pathway independent of beta-arrestins. Interestingly, PAR(1) is basally ubiquitinated and deubiquitinated after activation and traffics from endosomes to lysosomes independent of ubiquitination. In contrast, beta-arrestins mediate activated PAR(2) internalization and function as scaffolds that promote signalling from endocytic vesicles. Moreover, activated PAR(2) is modified with ubiquitin, which facilitates lysosomal degradation. Activated PARs also adopt distinct active conformations that signal to diverse effectors and are likely regulated by different mechanisms. Thus, the identification of the molecular machinery important for PAR signal regulation will enable the development of new strategies to manipulate receptor signalling and will provide novel targets for the development of drugs.