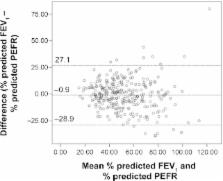 There are limited studies directly comparing correlation and agreement between peak expiratory flow rate (PEFR) and forced expiratory volume in 1 second (FEV 1) for severity classification of COPD. However, clarifying the role of PEFR as a surrogate of COPD severity classification instead of FEV 1 is essential in situations and areas where spirometry is not routinely available.

Although the correlation between FEV 1 and PEFR measurements were strongly significant, the agreement between the two tests was unsatisfied and may influence inappropriate clinical decision making in diagnosis, severity classification, and management of COPD.

Spirometry in primary care practice: the importance of quality assurance and the impact of spirometry workshops.

Aaron J. Mercer,  Harry Rea,  S Withy … (1999)
To determine the quality of spirometry performed in primary care practice and to assess the impact of formal training. Randomized, controlled prospective interventional study. Primary care practice, Auckland City, New Zealand. Thirty randomly selected primary care practices randomized to "trained" or "usual" groups. One doctor and one practice nurse were nominated to participate from each practice. "Trained" was defined as participation in an "initial" spirometry workshop at week 0 and a "maintenance of standards" workshop at week 12. "Usual" was defined as no formal training until week 12, when participants they attended the same "initial" workshop provided for the trained group. The study duration was 16 weeks. Each practice was provided with a spirometer to be used at their clinical discretion. Spirometry data were uploaded weekly and analyzed using American Thoracic Society (ATS) criteria for acceptability and reproducibility. The workshops were assessed objectively with practical and written assessments, confirming a significant training effect. However, analysis of spirometry performed in clinical practice by the trained practitioners revealed three acceptable blows in only 18.9% of patient tests. In comparison, 5.1% of patient tests performed by the usual practitioners had three acceptable blows (p<0.0001). Only 13.5% of patient tests in the trained group and 3.4% in the usual group (p<0.0001) satisfied full acceptability and reproducibility criteria. However, 33.1% and 12.5% of patient tests in the trained and usual groups, respectively (p<0.0001), achieved at least two acceptable blows, the minimum requirement. Nonacceptability was largely ascribable to failure to satisfy end-of-test criteria; a blow of at least 6 s. Visual inspection of the results of these blows as registered on the spirometer for the presence of a plateau on the volume-time curve suggests that < 15% were acceptable. Although a significant training effect was demonstrated, the quality of the spirometry performed in clinical practice did not generally satisfy full ATS criteria for acceptability and reproducibility. Further study would be required to determine the clinical impact. However, the ATS guidelines allow for the use of data from unacceptable or nonreproducible maneuvers at the discretion of the interpreter. Since most of the failures were end-of-test related, the FEV1 levels are likely to be valid. Our results serve to emphasize the importance of effective training and quality assurance programs to the provision of successful spirometry in primary care practice.

Relationship between airway obstruction and respiratory symptoms in adult asthmatics.