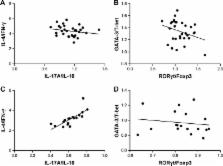 Th17 and regulatory T cell (Treg) play crucial roles in the pathogenesis of asthma. However, the association between Th17/Treg homeostasis and asthma exacerbation remains unclear.

Our results suggest that the homeostasis of the Treg and Th17 cells is broken in asthma exacerbation and correlates with asthma severity and disease control status. The outcome has significant implication in understanding the progression of asthma and providing helpful information for physicians in the diagnosis and treatment of asthma patients.

R. Wilson,  G Whitehead,  Donald N. Cook … (2009)
In humans, immune responses to inhaled aeroallergens develop in the lung and draining lymph nodes. Many animal models of asthma bypass this route and instead use intraperitoneal injections of allergen using aluminum hydroxide as an adjuvant. We investigated whether allergic sensitization through the airway elicits immune responses qualitatively different than those arising in the peritoneum. Mice were sensitized to allergen through the airway using low-dose LPS as an adjuvant, or through the peritoneum using aluminum hydroxide as an adjuvant. After a single allergen challenge, ELISA and flow cytometry were used to measure cytokines and leukocyte subsets. Invasive measurements of airway resistance were used to measure allergen-induced airway hyperreactivity (AHR). Sensitization through the peritoneum primed strong Th2 responses and eosinophilia, but not AHR, after a single allergen challenge. By contrast, allergic sensitization through the airway primed only modest Th2 responses, but strong Th17 responses. Th17 cells homed to the lung and released IL-17 into the airway on subsequent encounter with inhaled allergen. As a result, these mice developed IL-17-dependent airway neutrophilia and AHR. This AHR was neutrophil-dependent because it was abrogated in CXCR2-deficient mice and also in wild-type mice receiving a neutrophil-depleting antibody. Individually, neither IL-17 nor ongoing Th2 responses were sufficient to confer AHR, but together they acted synergistically to promote neutrophil recruitment, eosinophil recruitment and AHR. Allergic sensitization through the airway primes modest Th2 responses but strong Th17 responses that promote airway neutrophilia and acute AHR. These findings support a causal role for neutrophils in severe asthma.