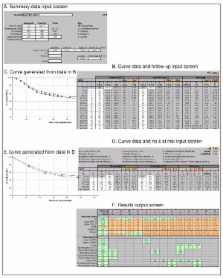 In systematic reviews and meta-analyses, time-to-event outcomes are most appropriately analysed using hazard ratios (HRs). In the absence of individual patient data (IPD), methods are available to obtain HRs and/or associated statistics by carefully manipulating published or other summary data. Awareness and adoption of these methods is somewhat limited, perhaps because they are published in the statistical literature using statistical notation.

This paper aims to 'translate' the methods for estimating a HR and associated statistics from published time-to-event-analyses into less statistical and more practical guidance and provide a corresponding, easy-to-use calculations spreadsheet, to facilitate the computational aspects.

A wider audience should be able to understand published time-to-event data in individual trial reports and use it more appropriately in meta-analysis. When faced with particular circumstances, readers can refer to the relevant sections of the paper. The spreadsheet can be used to assist them in carrying out the calculations.

Extracting summary statistics to perform meta-analyses of the published literature for survival endpoints.

Dinesh M. Parmar,  V. Torri,  Amanda Stewart (1998)
Meta-analyses aim to provide a full and comprehensive summary of related studies which have addressed a similar question. When the studies involve time to event (survival-type) data the most appropriate statistics to use are the log hazard ratio and its variance. However, these are not always explicitly presented for each study. In this paper a number of methods of extracting estimates of these statistics in a variety of situations are presented. Use of these methods should improve the efficiency and reliability of meta-analyses of the published literature with survival-type endpoints.

Empirical evidence for selective reporting of outcomes in randomized trials: comparison of protocols to published articles.

An-Wen Chan,  Asbjørn Hróbjartsson,  Mette Haahr … (2004)
Selective reporting of outcomes within published studies based on the nature or direction of their results has been widely suspected, but direct evidence of such bias is currently limited to case reports. To study empirically the extent and nature of outcome reporting bias in a cohort of randomized trials. Cohort study using protocols and published reports of randomized trials approved by the Scientific-Ethical Committees for Copenhagen and Frederiksberg, Denmark, in 1994-1995. The number and characteristics of reported and unreported trial outcomes were recorded from protocols, journal articles, and a survey of trialists. An outcome was considered incompletely reported if insufficient data were presented in the published articles for meta-analysis. Odds ratios relating the completeness of outcome reporting to statistical significance were calculated for each trial and then pooled to provide an overall estimate of bias. Protocols and published articles were also compared to identify discrepancies in primary outcomes. Completeness of reporting of efficacy and harm outcomes and of statistically significant vs nonsignificant outcomes; consistency between primary outcomes defined in the most recent protocols and those defined in published articles. One hundred two trials with 122 published journal articles and 3736 outcomes were identified. Overall, 50% of efficacy and 65% of harm outcomes per trial were incompletely reported. Statistically significant outcomes had a higher odds of being fully reported compared with nonsignificant outcomes for both efficacy (pooled odds ratio, 2.4; 95% confidence interval [CI], 1.4-4.0) and harm (pooled odds ratio, 4.7; 95% CI, 1.8-12.0) data. In comparing published articles with protocols, 62% of trials had at least 1 primary outcome that was changed, introduced, or omitted. Eighty-six percent of survey responders (42/49) denied the existence of unreported outcomes despite clear evidence to the contrary. The reporting of trial outcomes is not only frequently incomplete but also biased and inconsistent with protocols. Published articles, as well as reviews that incorporate them, may therefore be unreliable and overestimate the benefits of an intervention. To ensure transparency, planned trials should be registered and protocols should be made publicly available prior to trial completion.