Microbial laboratory evolution in the era of genome-scale science 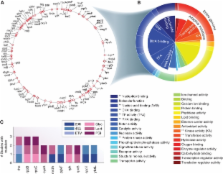 Advances in DNA sequencing, high-throughput technologies, and genetic manipulation systems have enabled empirical studies of the molecular and genomic bases of adaptive evolution. This review discusses key insights learned from direct observation of the evolution process.

Laboratory evolution studies provide fundamental biological insight through direct observation of the evolution process. They not only enable testing of evolutionary theory and principles, but also have applications to metabolic engineering and human health. Genome-scale tools are revolutionizing studies of laboratory evolution by providing complete determination of the genetic basis of adaptation and the changes in the organism's gene expression state. Here, we review studies centered on four central themes of laboratory evolution studies: (1) the genetic basis of adaptation; (2) the importance of mutations to genes that encode regulatory hubs; (3) the view of adaptive evolution as an optimization process; and (4) the dynamics with which laboratory populations evolve.

Michael Eisen,  P. T. Spellman,  P. O. Brown … (1999)
A system of cluster analysis for genome-wide expression data from DNA microarray hybridization is described that uses standard statistical algorithms to arrange genes according to similarity in pattern of gene expression. The output is displayed graphically, conveying the clustering and the underlying expression data simultaneously in a form intuitive for biologists. We have found in the budding yeast Saccharomyces cerevisiae that clustering gene expression data groups together efficiently genes of known similar function, and we find a similar tendency in human data. Thus patterns seen in genome-wide expression experiments can be interpreted as indications of the status of cellular processes. Also, coexpression of genes of known function with poorly characterized or novel genes may provide a simple means of gaining leads to the functions of many genes for which information is not available currently.

What is flux balance analysis?

Genome evolution and adaptation in a long-term experiment with Escherichia coli.

D. Yu,  Tae Kwang Oh,  Sung-Yong Yoon … (2009)
The relationship between rates of genomic evolution and organismal adaptation remains uncertain, despite considerable interest. The feasibility of obtaining genome sequences from experimentally evolving populations offers the opportunity to investigate this relationship with new precision. Here we sequence genomes sampled through 40,000 generations from a laboratory population of Escherichia coli. Although adaptation decelerated sharply, genomic evolution was nearly constant for 20,000 generations. Such clock-like regularity is usually viewed as the signature of neutral evolution, but several lines of evidence indicate that almost all of these mutations were beneficial. This same population later evolved an elevated mutation rate and accumulated hundreds of additional mutations dominated by a neutral signature. Thus, the coupling between genomic and adaptive evolution is complex and can be counterintuitive even in a constant environment. In particular, beneficial substitutions were surprisingly uniform over time, whereas neutral substitutions were highly variable.

This is an open-access article distributed under the terms of the Creative Commons Attribution Noncommercial No Derivative Works 3.0 Unported License, which permits distribution and reproduction in any medium, provided the original author and source are credited. This license does not permit commercial exploitation or the creation of derivative works without specific permission.