Effectiveness and safety of thymectomy plus prednisone compares with prednisone monotherapy for the treatment of non-thymomatous Myasthenia Gravis : Protocol for a systematic review 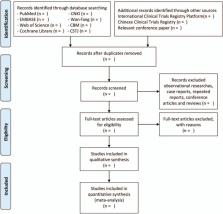 The pathogenesis of myasthenia gravis (MG) has strong connection with thymic abnormalities. Thymic hyperplasia or thymoma can be found with most patients. Thymectomy is currently one of the regular treatment in clinic, which is, however, still controversial for non-thymomatous MG. This research will assess the effectiveness and safety of thymectomy plus prednisone compared to prednisone monotherapy for the treatment of non-thymomatous MG systematically.

According to eligibility and ineligibility criteria, 8 databases, including PubMed, EMBASE, the Web of Science, the Cochrane Library, China National Knowledge Infrastructure (CNKI), Wan-fang Database, Chinese Biomedical Literature Database (CBM), China Science and Technology Journal Database (CSTJ), will be searched to gather the up-to-standard articles from September 2000 to September 2025. Inclusion criteria are as follows: randomized controlled trials of thymectomy plus prednisone for the treatment of non-thymomatous MG. The quantitative myasthenia gravis score (QMG) and the dose of prednisone required will be accepted as the main outcomes. Data synthesis, subgroup analysis, sensitivity analysis, and meta-regression analysis will be conducted using RevMan 5.3 software. We will use Egger or Begg test to evaluate symmetry on a funnel plot which is made to assess reporting bias, and use trial sequential analysis (TSA) to exclude the probability of false positives.

This systematic review will measure the QMG and the dose of prednisone required, the myasthenia gravis activities of daily living scale scores (MG-ADL), treatment-associated complications, incidence of myasthenic crisis and other aspects to comprehensively assess the clinical benefits of thymectomy plus prednisone for MG patients without thymoma.

The conclusion of this study will achieve convincing evidence to evaluate the effectiveness and safety of thymectomy plus prednisone for the treatment of non-thymomatous MG.

A systematic review of population based epidemiological studies in Myasthenia Gravis

Aisling S Carr,  Chris Cardwell,  Peter O McCarron … (2010)
Background The aim was to collate all myasthenia gravis (MG) epidemiological studies including AChR MG and MuSK MG specific studies. To synthesize data on incidence rate (IR), prevalence rate (PR) and mortality rate (MR) of the condition and investigate the influence of environmental and technical factors on any trends or variation observed. Methods Studies were identified using multiple sources and meta-analysis performed to calculate pooled estimates for IR, PR and MR. Results 55 studies performed between 1950 and 2007 were included, representing 1.7 billion population-years. For All MG estimated pooled IR (eIR): 5.3 per million person-years (C.I.:4.4, 6.1), range: 1.7 to 21.3; estimated pooled PR: 77.7 per million persons (C.I.:64.0, 94.3), range 15 to 179; MR range 0.1 to 0.9 per millions person-years. AChR MG eIR: 7.3 (C.I.:5.5, 7.8), range: 4.3 to 18.0; MuSK MG IR range: 0.1 to 0.32. However marked variation persisted between populations studied with similar methodology and in similar areas. Conclusions We report marked variation in observed frequencies of MG. We show evidence of increasing frequency of MG with year of study and improved study quality. This probably reflects improved case ascertainment. But other factors must also influence disease onset resulting in the observed variation in IR across geographically and genetically similar populations.

Clinical features, pathogenesis, and treatment of myasthenia gravis: a supplement to the Guidelines of the German Neurological Society

Nico Melzer,  Tobias Ruck,  Peter Fuhr … (2016)
Myasthenia gravis (MG) is an autoimmune antibody-mediated disorder of neuromuscular synaptic transmission. The clinical hallmark of MG consists of fluctuating fatigability and weakness affecting ocular, bulbar and (proximal) limb skeletal muscle groups. MG may either occur as an autoimmune disease with distinct immunogenetic characteristics or as a paraneoplastic syndrome associated with tumors of the thymus. Impairment of central thymic and peripheral self-tolerance mechanisms in both cases is thought to favor an autoimmune CD4+ T cell-mediated B cell activation and synthesis of pathogenic high-affinity autoantibodies of either the IgG1 and 3 or IgG4 subclass. These autoantibodies bind to the nicotinic acetylcholine receptor (AchR) itself, or muscle-specific tyrosine-kinase (MuSK), lipoprotein receptor-related protein 4 (LRP4) and agrin involved in clustering of AchRs within the postsynaptic membrane and structural maintenance of the neuromuscular synapse. This results in disturbance of neuromuscular transmission and thus clinical manifestation of the disease. Emphasizing evidence from clinical trials, we provide an updated overview on immunopathogenesis, and derived current and future treatment strategies for MG divided into: (a) symptomatic treatments facilitating neuromuscular transmission, (b) antibody-depleting treatments, and (c) immunotherapeutic treatment strategies.