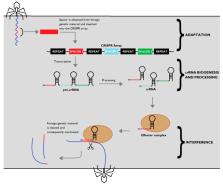 Bacteriophages are pervasive viruses that infect bacteria, relying on their genetic machinery to replicate. In order to protect themselves from this kind of invader, bacteria developed an ingenious adaptive defence system, clustered regularly interspaced short palindromic repeats (CRISPR). Researchers soon realised that a specific type of CRISPR system, CRISPR-Cas9, could be modified into a simple and efficient genetic engineering technology, with several improvements over currently used systems. This discovery set in motion a revolution in genetics, with new and improved CRISPR systems being used in plenty of in vitro and in vivo experiments in recent years. This review illustrates the mechanisms behind CRISPR-Cas systems as a means of bacterial immunity against phage invasion and how these systems were engineered to originate new genetic manipulation tools. Newfound CRISPR-Cas technologies and the up-and-coming applications of these systems on healthcare and other fields of science are also discussed.

Sarah Hinkley,  Irina Ankoudinova,  Christopher K. Barlow … (2011)
Nucleases that cleave unique genomic sequences in living cells can be used for targeted gene editing and mutagenesis. Here we develop a strategy for generating such reagents based on transcription activator-like effector (TALE) proteins from Xanthomonas. We identify TALE truncation variants that efficiently cleave DNA when linked to the catalytic domain of FokI and use these nucleases to generate discrete edits or small deletions within endogenous human NTF3 and CCR5 genes at efficiencies of up to 25%. We further show that designed TALEs can regulate endogenous mammalian genes. These studies demonstrate the effective application of designed TALE transcription factors and nucleases for the targeted regulation and modification of endogenous genes.

Koichi Kobayashi,  Julja Burchard,  Peter Linsley … (2003)
RNA interference is thought to require near-identity between the small interfering RNA (siRNA) and its cognate mRNA. Here, we used gene expression profiling to characterize the specificity of gene silencing by siRNAs in cultured human cells. Transcript profiles revealed siRNA-specific rather than target-specific signatures, including direct silencing of nontargeted genes containing as few as eleven contiguous nucleotides of identity to the siRNA. These results demonstrate that siRNAs may cross-react with targets of limited sequence similarity.