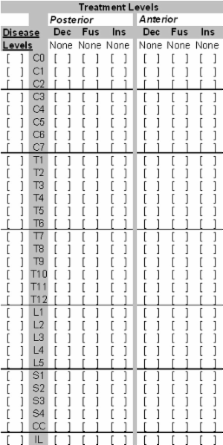 Independent of efficacy, information on safety of surgical procedures is essential for informed choices. We seek to develop standardized methodology for describing the safety of spinal operations and apply these methods to study lumbar surgery. We present a conceptual model for evaluating the safety of spine surgery and describe development of tools to measure principal components of this model: (1) specifying outcome by explicit criteria for adverse event definition, mode of ascertainment, cause, severity, or preventability, and (2) quantitatively measuring predictors such as patient factors, comorbidity, severity of degenerative spine disease, and invasiveness of spine surgery.

Comorbidity measures for use with administrative data.

R. Harris,  Markus F C Steiner,  Kevin Coffey … (1997)
This study attempts to develop a comprehensive set of comorbidity measures for use with large administrative inpatient datasets. The study involved clinical and empirical review of comorbidity measures, development of a framework that attempts to segregate comorbidities from other aspects of the patient's condition, development of a comorbidity algorithm, and testing on heterogeneous and homogeneous patient groups. Data were drawn from all adult, nonmaternal inpatients from 438 acute care hospitals in California in 1992 (n = 1,779,167). Outcome measures were those commonly available in administrative data: length of stay, hospital charges, and in-hospital death. A comprehensive set of 30 comorbidity measures was developed. The comorbidities were associated with substantial increases in length of stay, hospital charges, and mortality both for heterogeneous and homogeneous disease groups. Several comorbidities are described that are important predictors of outcomes, yet commonly are not measured. These include mental disorders, drug and alcohol abuse, obesity, coagulopathy, weight loss, and fluid and electrolyte disorders. The comorbidities had independent effects on outcomes and probably should not be simplified as an index because they affect outcomes differently among different patient groups. The present method addresses some of the limitations of previous measures. It is based on a comprehensive approach to identifying comorbidities and separates them from the primary reason for hospitalization, resulting in an expanded set of comorbidities that easily is applied without further refinement to administrative data for a wide range of diseases.

The Self-Administered Comorbidity Questionnaire: a new method to assess comorbidity for clinical and health services research.

Anne Fossel,  Gerold Stucki,  Jeffrey Katz … (2003)
To develop the Self-Administered Comorbidity Questionnaire (SCQ) and assess its psychometric properties, including the predictive validity of the instrument, as reflected by its association with health status and health care utilization after 1 year. A cross-sectional comparison of the SCQ with a standard, chart abstraction-based measure (Charlson Index) was conducted on 170 inpatients from medical and surgical care units. The association of the SCQ with the chart-based comorbidity instrument and health status (short form 36) was evaluated cross sectionally. The association between these measures and health status and resource utilization was assessed after 1 year. The Spearman correlation coefficient for the association between the SCQ and the Charlson Index was 0.32. After restricting each measure to include only comparable items, the correlation between measures was stronger (Spearman r = 0.55). The SCQ had modest associations with measures of resource utilization during the index admission, and with health status and resource utilization after 1 year. The SCQ has modest correlations with a widely used medical record-based comorbidity instrument, and with subsequent health status and utilization. This new measure represents an efficient method to assess comorbid conditions in clinical and health services research. It will be particularly useful in settings where medical records are unavailable.

Radiographic analysis of the sagittal alignment and balance of the spine in asymptomatic subjects.