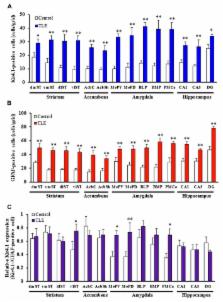 The inwardly rectifying potassium (Kir) channel Kir4.1 in brain astrocytes mediates spatial K + buffering and regulates neural activities. Recent studies have shown that loss-of-function mutations in the human gene KCNJ10 encoding Kir4.1 cause epileptic seizures, suggesting a close relationship between the Kir4.1 channel function and epileptogenesis. Here, we performed expressional analysis of Kir4.1 in a pilocarpine-induced rat model of temporal lobe epilepsy (TLE) to explore the role of Kir4.1 channels in modifying TLE epileptogenesis. Treatment of rats with pilocarpine (350 mg/kg, i.p.) induced acute status epilepticus, which subsequently caused spontaneous seizures 7–8 weeks after the pilocarpine treatment. Western blot analysis revealed that TLE rats (interictal condition) showed significantly higher levels of Kir4.1 than the control animals in the cerebral cortex, striatum, and hypothalamus. However, the expression of other Kir subunits, Kir5.1 and Kir2.1, remained unaltered. Immunohistochemical analysis illustrated that Kir4.1-immunoreactivity-positive astrocytes in the pilocarpine-induced TLE model were markedly increased in most of the brain regions examined, concomitant with an increase in the number of glial fibrillary acidic protein (GFAP)-positive astrocytes. In addition, Kir4.1 expression ratios relative to the number of astrocytes (Kir4.1-positive cells/GFAP-positive cells) were region-specifically elevated in the amygdala (i.e., medial and cortical amygdaloid nuclei) and sensory cortex. The present study demonstrated for the first time that the expression of astrocytic Kir4.1 channels was elevated in a pilocarpine-induced TLE model, especially in the amygdala, suggesting that astrocytic Kir4.1 channels play a role in modifying TLE epileptogenesis, possibly by acting as an inhibitory compensatory mechanism.

Giulia Curia,  Daniela Longo,  Giuseppe Biagini … (2008)
Understanding the pathophysiogenesis of temporal lobe epilepsy (TLE) largely rests on the use of models of status epilepticus (SE), as in the case of the pilocarpine model. The main features of TLE are: (i) epileptic foci in the limbic system; (ii) an “initial precipitating injury”; (iii) the so-called “latent period”; and (iv) the presence of hippocampal sclerosis leading to reorganization of neuronal networks. Many of these characteristics can be reproduced in rodents by systemic injection of pilocarpine; in this animal model, SE is followed by a latent period and later by the appearance of spontaneous recurrent seizures (SRSs). These processes are, however, influenced by experimental conditions such as rodent species, strain, gender, age, doses and routes of pilocarpine administration, as well as combinations with other drugs administered before and/or after SE. In the attempt to limit these sources of variability, we evaluated the methodological procedures used by several investigators in the pilocarpine model; in particular, we have focused on the behavioural, electrophysiological and histopathological findings obtained with different protocols. We addressed the various experimental approaches published to date, by comparing mortality rates, onset of SRSs, neuronal damage, and network reorganization. Based on the evidence reviewed here, we propose that the pilocarpine model can be a valuable tool to investigate the mechanisms involved in TLE, and even more so when standardized to reduce mortality at the time of pilocarpine injection, differences in latent period duration, variability in the lesion extent, and SRS frequency.

Biljana Djukic,  Kristen B Casper,  Benjamin D Philpot … (2007)
During neuronal activity, extracellular potassium concentration ([K+]out) becomes elevated and, if uncorrected, causes neuronal depolarization, hyperexcitability, and seizures. Clearance of K+ from the extracellular space, termed K+ spatial buffering, is considered to be an important function of astrocytes. Results from a number of studies suggest that maintenance of [K+]out by astrocytes is mediated by K+ uptake through the inward-rectifying Kir4.1 channels. To study the role of this channel in astrocyte physiology and neuronal excitability, we generated a conditional knock-out (cKO) of Kir4.1 directed to astrocytes via the human glial fibrillary acidic protein promoter gfa2. Kir4.1 cKO mice die prematurely and display severe ataxia and stress-induced seizures. Electrophysiological recordings revealed severe depolarization of both passive astrocytes and complex glia in Kir4.1 cKO hippocampal slices. Complex cell depolarization appears to be a direct consequence of Kir4.1 removal, whereas passive astrocyte depolarization seems to arise from an indirect developmental process. Furthermore, we observed a significant loss of complex glia, suggestive of a role for Kir4.1 in astrocyte development. Kir4.1 cKO passive astrocytes displayed a marked impairment of both K+ and glutamate uptake. Surprisingly, membrane and action potential properties of CA1 pyramidal neurons, as well as basal synaptic transmission in the CA1 stratum radiatum appeared unaffected, whereas spontaneous neuronal activity was reduced in the Kir4.1 cKO. However, high-frequency stimulation revealed greatly elevated posttetanic potentiation and short-term potentiation in Kir4.1 cKO hippocampus. Our findings implicate a role for glial Kir4.1 channel subunit in the modulation of synaptic strength.

The neurobiology of glia in the context of water and ion homeostasis.

M. Simard,  M Nedergaard (2004)
Astrocytes are highly complex cells that respond to a variety of external stimulations. One of the chief functions of astrocytes is to optimize the interstitial space for synaptic transmission by tight control of water and ionic homeostasis. Several lines of work have, over the past decade, expanded the role of astrocytes and it is now clear that astrocytes are active participants in the tri-partite synapse and modulate synaptic activity in hippocampus, cortex, and hypothalamus. Thus, the emerging concept of astrocytes includes both supportive functions as well as active modulation of neuronal output. Glutamate plays a central role in astrocytic-neuronal interactions. This excitatory amino acid is cleared from the neuronal synapses by astrocytes via glutamate transporters, and is converted into glutamine, which is released and in turn taken up by neurons. Furthermore, metabotropic glutamate receptor activation on astrocytes triggers via increases in cytosolic Ca(2+) a variety of responses. For example, calcium-dependent glutamate release from the astrocytes modulates the activity of both excitatory and inhibitory synapses. In vivo studies have identified the astrocytic end-foot processes enveloping the vessel walls as the center for astrocytic Ca(2+) signaling and it is possible that Ca(2+) signaling events in the cellular component of the blood-brain barrier are instrumental in modulation of local blood flow as well as substrate transport. The hormonal regulation of water and ionic homeostasis is achieved by the opposing effects of vasopressin and atrial natriuretic peptide on astroglial water and chloride uptake. In conjuncture, the brain appears to have a distinct astrocytic perivascular system, involving several potassium channels as well as aquaporin 4, a membrane water channel, which has been localized to astrocytic endfeet and mediate water fluxes within the brain. The multitask functions of astrocytes are essential for higher brain function. One of the major challenges for future studies is to link receptor-mediated signaling events in astrocytes to their roles in metabolism, ion, and water homeostasis.

†Yuki Nagao and Yuya Harada have contributed equally to this work.