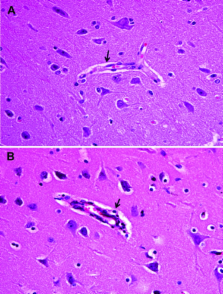 The widely used pseudorabies virus (PRV) Bartha-K61 vaccine has played a key role in the eradication of PRV. Since late 2011, however, a disease characterized by neurologic symptoms and a high number of deaths among newborn piglets has occurred among Bartha-K61–vaccinated pigs on many farms in China. Clinical samples from pigs on 15 farms in 6 provinces were examined. The PRV gE gene was detectable by PCR in all samples, and sequence analysis of the gE gene showed that all isolates belonged to a relatively independent cluster and contained 2 amino acid insertions. A PRV (named HeN1) was isolated and caused transitional fever in pigs. In protection assays, Bartha-K61 vaccine provided 100% protection against lethal challenge with SC (a classical PRV) but only 50% protection against 4 challenges with strain HeN1. The findings suggest that Bartha-K61 vaccine does not provide effective protection against PRV HeN1 infection.

Christoph J Hengartner,  Lisa E. Pomeranz,  Louise E. Reynolds (2005)
Pseudorabies virus (PRV) is a herpesvirus of swine, a member of the Alphaherpesvirinae subfamily, and the etiological agent of Aujeszky's disease. This review describes the contributions of PRV research to herpesvirus biology, neurobiology, and viral pathogenesis by focusing on (i) the molecular biology of PRV, (ii) model systems to study PRV pathogenesis and neurovirulence, (iii) PRV transsynaptic tracing of neuronal circuits, and (iv) veterinary aspects of pseudorabies disease. The structure of the enveloped infectious particle, the content of the viral DNA genome, and a step-by-step overview of the viral replication cycle are presented. PRV infection is initiated by binding to cellular receptors to allow penetration into the cell. After reaching the nucleus, the viral genome directs a regulated gene expression cascade that culminates with viral DNA replication and production of new virion constituents. Finally, progeny virions self-assemble and exit the host cells. Animal models and neuronal culture systems developed for the study of PRV pathogenesis and neurovirulence are discussed. PRV serves asa self-perpetuating transsynaptic tracer of neuronal circuitry, and we detail the original studies of PRV circuitry mapping, the biology underlying this application, and the development of the next generation of tracer viruses. The basic veterinary aspects of pseudorabies management and disease in swine are discussed. PRV infection progresses from acute infection of the respiratory epithelium to latent infection in the peripheral nervous system. Sporadic reactivation from latency can transmit PRV to new hosts. The successful management of PRV disease has relied on vaccination, prevention, and testing.

Xiuwen Sui,  Jiechao Yin,  Xiaofeng Ren (2009)
Diammonium glycyrrhizin (DG), a salt from glycyrrhizinate (GL) that is a major active component of licorice root extract with various pharmacological activities was investigated for its inhibitory effect on pseudorabies virus (PrV) infection. In parallel, lithium chloride (LiCl), a chemical reagent with potential antiviral activity was compared with DG for their inhibitory ability against PrV infection in vitro. Virus plaque-reduction assays, PCR and RT-PCR analysis indicated that both drugs inhibited cell infection by PrV. Moreover, addition of the drugs resulted in fewer apoptotic cells during PrV infection.