Can air pollution negate the health benefits of cycling and walking? 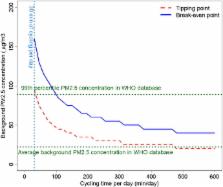 For the global average urban background PM 2.5 concentration (22 μg/m3) benefits of PA by far outweigh risks from air pollution even under the most extreme levels of active travel. In areas with PM 2.5 concentrations of 100 μg/m3, harms would exceed benefits after 1 h 30 min of cycling per day or more than 10 h of walking per day. If the counterfactual was driving, rather than staying at home, the benefits of PA would exceed harms from air pollution up to 3 h 30 min of cycling per day. The results were sensitive to dose–response function (DRF) assumptions for PM 2.5 and PA.

PA benefits of active travel outweighed the harm caused by air pollution in all but the most extreme air pollution concentrations.

charles matthews, A. Jurj, X.-o. Shu … (2007)
This investigation described the effects of exercise, walking, and cycling for transportation, as well as the effect of overall nonexercise physical activity, on mortality in the Shanghai Women's Health Study (1997-2004). Women without heart disease, stroke, or cancer were followed for an average of 5.7 years (n = 67,143), and there were 1,091 deaths from all causes, 537 deaths from cancer, and 251 deaths from cardiovascular diseases. Information about physical activity and relevant covariates was obtained by interview. Proportional hazards models were used to estimate adjusted hazard ratios and 95% confidence intervals. Exercise and cycling for transportation were both inversely and independently associated with all-cause mortality (p(trend) < 0.05), but walking for transportation was less strongly associated with reduced risk (p(trend) = 0.07). Women reporting no regular exercise but who reported 10 or more metabolic equivalent (MET)-hours/day of nonexercise activity were at 25-50% reduced risk (p(trend) < 0.01) relative to less active women (0-9.9 MET-hours/day). Among women reporting the least nonexercise activity (0-9.9 MET-hours/day) but reporting regular exercise participation, exercise was associated with reduced mortality (hazard ratio = 0.78, 95% confidence interval: 0.62, 0.99). These findings add new evidence that overall physical activity levels are an important determinant of longevity, and that health benefit can be obtained through an active lifestyle, exercise, or combinations of both.

Quantifying the health impacts of ambient air pollutants: recommendations of a WHO/Europe project

Marie-Eve Héroux, H Ross Anderson, Richard Atkinson … (2015)
Objective Quantitative estimates of air pollution health impacts have become an increasingly critical input to policy decisions. The WHO project “Health risks of air pollution in Europe—HRAPIE” was implemented to provide the evidence-based concentration–response functions for quantifying air pollution health impacts to support the 2013 revision of the air quality policy for the European Union (EU). Methods A group of experts convened by WHO Regional Office for Europe reviewed the accumulated primary research evidence together with some commissioned reviews and recommended concentration–response functions for air pollutant–health outcome pairs for which there was sufficient evidence for a causal association. Results The concentration–response functions link several indicators of mortality and morbidity with short- and long-term exposure to particulate matter, ozone and nitrogen dioxide. The project also provides guidance on the use of these functions and associated baseline health information in the cost–benefit analysis. Conclusions The project results provide the scientific basis for formulating policy actions to improve air quality and thereby reduce the burden of disease associated with air pollution in Europe. Electronic supplementary material The online version of this article (doi:10.1007/s00038-015-0690-y) contains supplementary material, which is available to authorized users.

A Study of the Combined Effects of Physical Activity and Air Pollution on Mortality in Elderly Urban Residents: The Danish Diet, Cancer, and Health Cohort

Zorana Andersen, Audrey de Nazelle, Michelle Mendez … (2015)
Background Physical activity reduces, whereas exposure to air pollution increases, the risk of premature mortality. Physical activity amplifies respiratory uptake and deposition of air pollutants in the lung, which may augment acute harmful effects of air pollution during exercise. Objectives We aimed to examine whether benefits of physical activity on mortality are moderated by long-term exposure to high air pollution levels in an urban setting. Methods A total of 52,061 subjects (50–65 years of age) from the Danish Diet, Cancer, and Health cohort, living in Aarhus and Copenhagen, reported data on physical activity in 1993–1997 and were followed until 2010. High exposure to air pollution was defined as the upper 25th percentile of modeled nitrogen dioxide (NO2) levels at residential addresses. We associated participation in sports, cycling, gardening, and walking with total and cause-specific mortality by Cox regression, and introduced NO2 as an interaction term. Results In total, 5,534 subjects died: 2,864 from cancer, 1,285 from cardiovascular disease, 354 from respiratory disease, and 122 from diabetes. Significant inverse associations of participation in sports, cycling, and gardening with total, cardiovascular, and diabetes mortality were not modified by NO2. Reductions in respiratory mortality associated with cycling and gardening were more pronounced among participants with moderate/low NO2 [hazard ratio (HR) = 0.55; 95% CI: 0.42, 0.72 and 0.55; 95% CI: 0.41, 0.73, respectively] than with high NO2 exposure (HR = 0.77; 95% CI: 0.54, 1.11 and HR = 0.81; 95% CI: 0.55, 1.18, p-interaction = 0.09 and 0.02, respectively). Conclusions In general, exposure to high levels of traffic-related air pollution did not modify associations, indicating beneficial effects of physical activity on mortality. These novel findings require replication in other study populations. Citation Andersen ZJ, de Nazelle A, Mendez MA, Garcia-Aymerich J, Hertel O, Tjønneland A, Overvad K, Raaschou-Nielsen O, Nieuwenhuijsen MJ. 2015. A study of the combined effects of physical activity and air pollution on mortality in elderly urban residents: the Danish Diet, Cancer, and Health cohort. Environ Health Perspect 123:557–563; http://dx.doi.org/10.1289/ehp.1408698