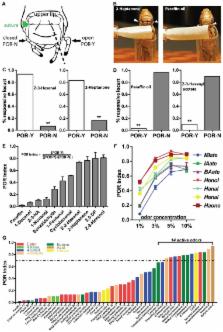 Sensing chemical cues is crucial for insects through their olfactory systems to adapt the environments. The receptors employed in insect olfactory system belong to the Odorant Receptor (ORs) and Ionotropic Receptor (IRs) families. In general, ORs and IRs are present in distinct olfactory sensory neurons and function independently. Here, we present evidence that in locust, the abundant host plant odor Hexanal is detected by both IR- and OR-expressing neurons. Use of the palp opening response (POR) as a simple behavioral paradigm in conjunction with RNA interference (RNAi) revealed that these two pathways are both needed for the detection of Hexanal. Two-color fluorescence in situ hybridization showed that OR2 and odorant-binding protein 1 (obp1) were co-localized in palps sensilla basiconica. Obp2a and IR8a were co-localized as well, but associated with sensilla chaetica on the palps. Furthermore, both OR2- and obp1-knockdowns showed reduced POR responses to Hexanal and E-2-Hexenal, and the same was true for Hexanal with IR8a- and obp2a-knockdowns. Detection to E-2-Hexenal was independent of IR8a-mediated gene silencing. Besides, Hexanal and E-2-Hexenal evoked dose-dependent responses in palp basiconica via extracellular recordings. Our results indicate that both OR and IR pathways are involved in the detection of one aldehyde.

Tatsuro Nakagawa,  Leslie B. Vosshall,  Takao Nakagawa … (2008)
In insects, each olfactory sensory neuron expresses between one and three ligand-binding members of the olfactory receptor (OR) gene family, along with the highly conserved and broadly expressed Or83b co-receptor. The functional insect OR consists of a heteromeric complex of unknown stoichiometry but comprising at least one variable odorant-binding subunit and one constant Or83b family subunit. Insect ORs lack homology to G-protein-coupled chemosensory receptors in vertebrates and possess a distinct seven-transmembrane topology with the amino terminus located intracellularly. Here we provide evidence that heteromeric insect ORs comprise a new class of ligand-activated non-selective cation channels. Heterologous cells expressing silkmoth, fruitfly or mosquito heteromeric OR complexes showed extracellular Ca2+ influx and cation-non-selective ion conductance on stimulation with odorant. Odour-evoked OR currents are independent of known G-protein-coupled second messenger pathways. The fast response kinetics and OR-subunit-dependent K+ ion selectivity of the insect OR complex support the hypothesis that the complex between OR and Or83b itself confers channel activity. Direct evidence for odorant-gated channels was obtained by outside-out patch-clamp recording of Xenopus oocyte and HEK293T cell membranes expressing insect OR complexes. The ligand-gated ion channel formed by an insect OR complex seems to be the basis for a unique strategy that insects have acquired to respond to the olfactory environment.

Drosophila odorant receptors are both ligand-gated and cyclic-nucleotide-activated cation channels.

Bill Hansson,  Dieter Wicher,  Regine Heller … (2008)
From worm to man, many odorant signals are perceived by the binding of volatile ligands to odorant receptors that belong to the G-protein-coupled receptor (GPCR) family. They couple to heterotrimeric G-proteins, most of which induce cAMP production. This second messenger then activates cyclic-nucleotide-gated ion channels to depolarize the olfactory receptor neuron, thus providing a signal for further neuronal processing. Recent findings, however, have challenged this concept of odorant signal transduction in insects, because their odorant receptors, which lack any sequence similarity to other GPCRs, are composed of conventional odorant receptors (for example, Or22a), dimerized with a ubiquitously expressed chaperone protein, such as Or83b in Drosophila. Or83b has a structure akin to GPCRs, but has an inverted orientation in the plasma membrane. However, G proteins are expressed in insect olfactory receptor neurons, and olfactory perception is modified by mutations affecting the cAMP transduction pathway. Here we show that application of odorants to mammalian cells co-expressing Or22a and Or83b results in non-selective cation currents activated by means of an ionotropic and a metabotropic pathway, and a subsequent increase in the intracellular Ca(2+) concentration. Expression of Or83b alone leads to functional ion channels not directly responding to odorants, but being directly activated by intracellular cAMP or cGMP. Insect odorant receptors thus form ligand-gated channels as well as complexes of odorant-sensing units and cyclic-nucleotide-activated non-selective cation channels. Thereby, they provide rapid and transient as well as sensitive and prolonged odorant signalling.

A spatial map of olfactory receptor expression in the Drosophila antenna.

H Amrein,  S Morozov,  Andrey Rzhetsky … (1999)
Insects provide an attractive system for the study of olfactory sensory perception. We have identified a novel family of seven transmembrane domain proteins, encoded by 100 to 200 genes, that is likely to represent the family of Drosophila odorant receptors. Members of this gene family are expressed in topographically defined subpopulations of olfactory sensory neurons in either the antenna or the maxillary palp. Sensory neurons express different complements of receptor genes, such that individual neurons are functionally distinct. The isolation of candidate odorant receptor genes along with a genetic analysis of olfactory-driven behavior in insects may ultimately afford a system to understand the mechanistic link between odor recognition and behavior.

This is an open access article distributed under the terms of the Creative Commons Attribution (CC BY-NC) license ( https://creativecommons.org/licenses/by-nc/4.0/). See http://ivyspring.com/terms for full terms and conditions.