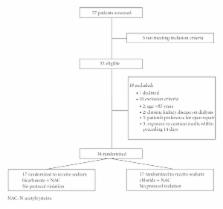 Purpose. Contrast-induced nephropathy (CIN) can contribute to acute kidney injury (AKI) in patients undergoing endovascular aortic aneurysm surgery. We evaluated the incidence of AKI together with the evolution of early biomarkers of renal injury in patients receiving bicarbonates or NaCl 0.9%. Methods. This study involved endovascular aortic aneurysm surgery patients. Group A ( n = 17) received bicarbonates 3 mL/kg/h for 1 h before the procedure and then 1 mL/kg/h until 6 h after surgery, whereas group B ( n = 17) received NaCl 0.9% using the same protocol. Biomarkers of renal injury from urine (interleukin-18 (IL-18), neutrophil gelatinase-associated lipocalin (NGAL), N-acetyl- β-D-glucosaminidase (NAG), and kidney injury molecule 1 (KIM-1)) and blood (NGAL, cystatin C) were measured at baseline and 3, 24, and 48 h postoperatively. Results. AKI occurred in 1 patient (2.9%), in the bicarbonates group. IL-18, NAG, NGAL, and KIM-1 significantly rose in both groups after the surgery. There was a greater rise in NGAL and IL-18 after 3 h in the bicarbonates versus NaCl 0.9% group: 1115% versus 240% increase ( P = 0.03) and 338% increase versus 1.4% decrease ( P = 0.01). Conclusions. Despite significant elevation in biomarkers of renal injury, we demonstrated a low rate of AKI following endovascular aortic surgery.

Roxana Mehran,  Eve Aymong,  Eugenia Nikolsky … (2004)
We sought to develop a simple risk score of contrast-induced nephropathy (CIN) after percutaneous coronary intervention (PCI). Although several risk factors for CIN have been identified, the cumulative risk rendered by their combination is unknown. A total of 8,357 patients were randomly assigned to a development and a validation dataset. The baseline clinical and procedural characteristics of the 5,571 patients in the development dataset were considered as candidate univariate predictors of CIN (increase >or=25% and/or >or=0.5 mg/dl in serum creatinine at 48 h after PCI vs. baseline). Multivariate logistic regression was then used to identify independent predictors of CIN with a p value 75 years, anemia, and volume of contrast) were assigned a weighted integer; the sum of the integers was a total risk score for each patient. The overall occurrence of CIN in the development set was 13.1% (range 7.5% to 57.3% for a low [ or=16] risk score, respectively); the rate of CIN increased exponentially with increasing risk score (Cochran Armitage chi-square, p < 0.0001). In the 2,786 patients of the validation dataset, the model demonstrated good discriminative power (c statistic = 0.67); the increasing risk score was again strongly associated with CIN (range 8.4% to 55.9% for a low and high risk score, respectively). The risk of CIN after PCI can be simply assessed using readily available information. This risk score can be used for both clinical and investigational purposes.

NGAL is an early predictive biomarker of contrast-induced nephropathy in children.

Mark M. Mitsnefes,  Catherine Dent,  Peter J. Allen … (2007)
We hypothesized that neutrophil gelatinase-associated lipocalin (NGAL) is an early predictive biomarker of contrast-induced nephropathy (CIN). We prospectively enrolled 91 children (age 0-18 years) with congenital heart disease undergoing elective cardiac catheterization and angiography with contrast administration (CC; Ioversol). Serial urine and plasma samples were analyzed in a double-blind fashion by NGAL enzyme-linked immunosorbent assay (ELISA). CIN, defined as a 50% increase in serum creatinine from baseline, was found in 11 subjects (12%), but detection using increase in serum creatinine was only possible 6-24 h after CC. In contrast, significant elevation of NGAL concentrations in urine (135 +/- 32 vs. 11.6 +/- 2 ng/ml without CIN, p < 0.001) and plasma (151 +/- 34 vs. 36 +/- 4 without CIN, p < 0.001) were noted within 2 h after CC in those subjects. Using a cutoff value of 100 ng/ml, sensitivity, specificity, and area under the receiver-operating characteristic (ROC) curve for prediction of CIN were excellent for the 2-h urine NGAL (73%, 100%, and 0.92, respectively) and 2-h plasma NGAL (73%, 100%, and 0.91, respectively). By multivariate analysis, the 2-h NGAL concentrations in the urine (R (2) = 0.52, p < 0.0001) and plasma (R (2) = 0.72, p < 0.0001) were found to be powerful independent predictors of CIN. Patient demographics and contrast volume were not predictive of CIN.