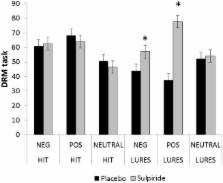 Episodic memory, working memory, emotional memory, and attention are subject to dopaminergic modulation. However, the potential role of dopamine on the generation of false memories is unknown. This study defined the role of the dopamine D 2 receptor on true and false recognition memories. Twenty-four young, healthy volunteers ingested a single dose of placebo or 400 mg oral sulpiride, a dopamine D 2-receptor antagonist, just before starting the recognition memory task in a randomized, double-blind, and placebo-controlled trial. The sulpiride group presented more false recognitions during visual and verbal processing than the placebo group, although both groups had the same indices of true memory. These findings demonstrate that dopamine D 2 receptors blockade in healthy volunteers can specifically increase the rate of false recognitions. The findings fit well the two-process view of causes of false memories, the activation/monitoring failures model.

The amygdala modulates the consolidation of memories of emotionally arousing experiences.

James McGaugh (2003)
Converging findings of animal and human studies provide compelling evidence that the amygdala is critically involved in enabling us to acquire and retain lasting memories of emotional experiences. This review focuses primarily on the findings of research investigating the role of the amygdala in modulating the consolidation of long-term memories. Considerable evidence from animal studies investigating the effects of posttraining systemic or intra-amygdala infusions of hormones and drugs, as well as selective lesions of specific amygdala nuclei, indicates that (a) the amygdala mediates the memory-modulating effects of adrenal stress hormones and several classes of neurotransmitters; (b) the effects are selectively mediated by the basolateral complex of the amygdala (BLA); (c) the influences involve interactions of several neuromodulatory systems within the BLA that converge in influencing noradrenergic and muscarinic cholinergic activation; (d) the BLA modulates memory consolidation via efferents to other brain regions, including the caudate nucleus, nucleus accumbens, and cortex; and (e) the BLA modulates the consolidation of memory of many different kinds of information. The findings of human brain imaging studies are consistent with those of animal studies in suggesting that activation of the amygdala influences the consolidation of long-term memory; the degree of activation of the amygdala by emotional arousal during encoding of emotionally arousing material (either pleasant or unpleasant) correlates highly with subsequent recall. The activation of neuromodulatory systems affecting the BLA and its projections to other brain regions involved in processing different kinds of information plays a key role in enabling emotionally significant experiences to be well remembered.

On the prediction of occurrence of particular verbal intrusions in immediate recall.

Dopamine and the regulation of cognition and attention.

André Nieoullon (2002)
Dopamine (DA) acts as a key neurotransmitter in the brain. Numerous studies have shown its regulatory role for motor and limbic functions. However, in the early stages of Parkinson's disease (PD), alterations of executive functions also suggest a role for DA in regulating cognitive functions. Some other diseases, which can also involve DA dysfunction, such as schizophrenia or attention deficit hyperactivity disorder (ADHD) in children, as shown from the ameliorative action of dopaminergic antagonists and agonists, respectively, also show alteration of cognitive functions. Experimental studies showed that selective lesions of the dopaminergic neurons in rats or primates can actually provide cognitive deficits, especially when the mesocorticolimbic component of the dopaminergic systems is altered. Data from the experiments also showed significant alteration in attentional processes, thus raising the question of direct involvement of DA in regulating attention. Since the dopaminergic influence is mainly exerted over the frontal lobe and basal ganglia, it has been suggested that cognitive deficits express alteration in these subcortical brain structures closely linked to cortical areas, more than simple deficit in dopaminergic transmission. This point is still a matter of debate but, undoubtedly, DA acts as a powerful regulator of different aspects of cognitive brain functions. In this respect, normalizing DA transmission will contribute to improve the cognitive deficits not only related to neurologic or psychiatric diseases, but also in normal aging. Ontogenic and phylogenetic analysis of dopaminergic systems can provide evidences for a role of DA in the development of cognitive general capacities. DA can have a trophic action during maturation, which may influence the later cortical specification, particularly of pre-frontal cortical areas. Moreover, the characteristic extension of the dopaminergic cortical innervation in the rostro-caudal direction during the last stages of evolution in mammals can also be related to the appearance of progressively more developed cognitive capacities. Such an extension of cortical DA innervation could be related to increased processing of cortical information through basal ganglia, either during the course of evolution or development. DA has thus to be considered as a key neuroregulator which contributes to behavioral adaptation and to anticipatory processes necessary for preparing voluntary action consequent upon intention. All together, it can be suggested that a correlation exists between DA innervation and expression of cognitive capacities. Altering the dopaminergic transmission could, therefore, contribute to cognitive impairment. Copyright 2002 Elsevier Science Ltd.

Specialty section: This article was submitted to Affective Disorders and Psychosomatic Research, a section of the journal Frontiers in Psychiatry