The effect of combination treatment with aliskiren and blockers of the renin-angiotensin system on hyperkalaemia and acute kidney injury: systematic review and meta-analysis 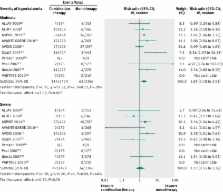 Objective To examine the safety of using aliskiren combined with agents used to block the renin-angiotensin system.

Data sources Medline, Embase, the Cochrane Library, and two trial registries, published up to 7 May 2011.

Study selection Published and unpublished randomised controlled trials that compared combined treatment using aliskiren and angiotensin converting enzyme inhibitors or angiotensin receptor blockers with monotherapy using these agents for at least four weeks and that provided numerical data on the adverse event outcomes of hyperkalaemia and acute kidney injury. A random effects model was used to calculate pooled risk ratios and 95% confidence intervals for these outcomes.

Results 10 randomised controlled studies (4814 participants) were included in the analysis. Combination therapy with aliskiren and angiotensin converting enzyme inhibitors or angiotensin receptor blockers significantly increased the risk of hyperkalaemia compared with monotherapy using angiotensin converting enzymes or angiotensin receptor blockers (relative risk 1.58, 95% confidence interval 1.24 to 2.02) or aliskiren alone (1.67, 1.01 to 2.79). The risk of acute kidney injury did not differ significantly between the combined therapy and monotherapy groups (1.14, 0.68 to 1.89).

Conclusion Use of aliskerin in combination with angiotensin converting enzyme inhibitors or angiotensin receptor blockers is associated with an increased risk for hyperkalaemia. The combined use of these agents warrants careful monitoring of serum potassium levels.

Rates of hyperkalemia after publication of the Randomized Aldactone Evaluation Study.

Alexander Kopp,  Belinda Lee,  David Juurlink … (2004)
The Randomized Aldactone Evaluation Study (RALES) demonstrated that spironolactone significantly improves outcomes in patients with severe heart failure. Use of angiotensin-converting-enzyme (ACE) inhibitors is also indicated in these patients. However, life-threatening hyperkalemia can occur when these drugs are used together. We conducted a population-based time-series analysis to examine trends in the rate of spironolactone prescriptions and the rate of hospitalization for hyperkalemia in ambulatory patients before and after the publication of RALES. We linked prescription-claims data and hospital-admission records for more than 1.3 million adults 66 years of age or older in Ontario, Canada, for the period from 1994 through 2001. Among patients treated with ACE inhibitors who had recently been hospitalized for heart failure, the spironolactone-prescription rate was 34 per 1000 patients in 1994, and it increased immediately after the publication of RALES, to 149 per 1000 patients by late 2001 (P<0.001). The rate of hospitalization for hyperkalemia rose from 2.4 per 1000 patients in 1994 to 11.0 per 1000 patients in 2001 (P<0.001), and the associated mortality rose from 0.3 per 1000 to 2.0 per 1000 patients (P<0.001). As compared with expected numbers of events, there were 560 (95 percent confidence interval, 285 to 754) additional hyperkalemia-related hospitalizations and 73 (95 percent confidence interval, 27 to 120) additional hospital deaths during 2001 among older patients with heart failure who were treated with ACE inhibitors in Ontario. Publication of RALES was not associated with significant decreases in the rates of readmission for heart failure or death from all causes. The publication of RALES was associated with abrupt increases in the rate of prescriptions for spironolactone and in hyperkalemia-associated morbidity and mortality. Closer laboratory monitoring and more judicious use of spironolactone may reduce the occurrence of this complication. Copyright 2004 Massachusetts Medical Society

Aliskiren combined with losartan in type 2 diabetes and nephropathy.

Norman Hollenberg,  Frederik Persson,   … (2008)
Diabetic nephropathy is the leading cause of end-stage renal disease in developed countries. We evaluated the renoprotective effects of dual blockade of the renin-angiotensin-aldosterone system by adding treatment with aliskiren, an oral direct renin inhibitor, to treatment with the maximal recommended dose of losartan (100 mg daily) and optimal antihypertensive therapy in patients who had hypertension and type 2 diabetes with nephropathy. We enrolled 599 patients in this multinational, randomized, double-blind study. After a 3-month, open-label, run-in period during which patients received 100 mg of losartan daily, patients were randomly assigned to receive 6 months of treatment with aliskiren (150 mg daily for 3 months, followed by an increase in dosage to 300 mg daily for another 3 months) or placebo, in addition to losartan. The primary outcome was a reduction in the ratio of albumin to creatinine, as measured in an early-morning urine sample, at 6 months. The baseline characteristics of the two groups were similar. Treatment with 300 mg of aliskiren daily, as compared with placebo, reduced the mean urinary albumin-to-creatinine ratio by 20% (95% confidence interval, 9 to 30; P<0.001), with a reduction of 50% or more in 24.7% of the patients who received aliskiren as compared with 12.5% of those who received placebo (P<0.001). A small difference in blood pressure was seen between the treatment groups by the end of the study period (systolic, 2 mm Hg lower [P=0.07] and diastolic, 1 mm Hg lower [P=0.08] in the aliskiren group). The total numbers of adverse and serious adverse events were similar in the groups. Aliskiren may have renoprotective effects that are independent of its blood-pressure-lowering effect in patients with hypertension, type 2 diabetes, and nephropathy who are receiving the recommended renoprotective treatment. (ClinicalTrials.gov number, NCT00097955 [ClinicalTrials.gov].). Copyright 2008 Massachusetts Medical Society.

The frequency of hyperkalemia and its significance in chronic kidney disease.

Jeffrey C. Fink,  Jacquelyn Weir,  Van Hsu … (2009)
Hyperkalemia is a potential threat to patient safety in chronic kidney disease (CKD). This study determined the incidence of hyperkalemia in CKD and whether it is associated with excess mortality. This retrospective analysis of a national cohort comprised 2 103 422 records from 245 808 veterans with at least 1 hospitalization and at least 1 inpatient or outpatient serum potassium record during the fiscal year 2005. Chronic kidney disease and treatment with angiotensin-converting enzyme inhibitors and/or angiotensin II receptor blockers (blockers of the renin-angiotensin-aldosterone system [RAAS]) were the key predictors of hyperkalemia. Death within 1 day of a hyperkalemic event was the principal outcome. Of the 66 259 hyperkalemic events (3.2% of records), more occurred as inpatient events (n = 34 937 [52.7%]) than as outpatient events (n = 31 322 [47.3%]). The adjusted rate of hyperkalemia was higher in patients with CKD than in those without CKD among individuals treated with RAAS blockers (7.67 vs 2.30 per 100 patient-months; P or=5.5 and or=6.0 mEq/L) hyperkalemic event was highest with no CKD (OR, 10.32 and 31.64, respectively) vs stage 3 (OR, 5.35 and 19.52, respectively), stage 4 (OR, 5.73 and 11.56, respectively), or stage 5 (OR, 2.31 and 8.02, respectively) CKD, with all P < .001 vs normokalemia and no CKD. The risk of hyperkalemia is increased with CKD, and its occurrence increases the odds of mortality within 1 day of the event. These findings underscore the importance of this metabolic disturbance as a threat to patient safety in CKD.