snoRNA, a Novel Precursor of microRNA in Giardia lamblia 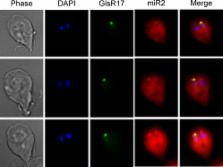 An Argonaute homolog and a functional Dicer have been identified in the ancient eukaryote Giardia lamblia, which apparently lacks the ability to perform RNA interference (RNAi). The Giardia Argonaute plays an essential role in growth and is capable of binding specifically to the m 7G-cap, suggesting a potential involvement in microRNA (miRNA)-mediated translational repression. To test such a possibility, small RNAs were isolated from Giardia trophozoites, cloned, and sequenced. A 26-nucleotide (nt) small RNA (miR2) was identified as a product of Dicer-processed snoRNA GlsR17 and localized to the cytoplasm by fluorescence in situ hybridization, whereas GlsR17 was found primarily in the nucleolus of only one of the two nuclei in Giardia. Three other small RNAs were also identified as products of snoRNAs, suggesting that the latter could be novel precursors of miRNAs in Giardia. Putative miR2 target sites were identified at the 3′-untranslated regions (UTR) of 22 variant surface protein mRNAs using the miRanda program. In vivo expression of Renilla luciferase mRNA containing six identical miR2 target sites in the 3′-UTR was reduced by 40% when co-transfected with synthetic miR2, while the level of luciferase mRNA remained unaffected. Thus, miR2 likely affects translation but not mRNA stability. This repression, however, was not observed when Argonaute was knocked down in Giardia using a ribozyme-antisense RNA. Instead, an enhancement of luciferase expression was observed, suggesting a loss of endogenous miR2-mediated repression when this protein is depleted. Additionally, the level of miR2 was significantly reduced when Dicer was knocked down. In all, the evidence indicates the presence of a snoRNA-derived miRNA-mediated translational repression in Giardia.

Gene regulation in Giardia lamblia, a primitive parasitic protozoan responsible for the diarrheal disease giardiasis, is poorly understood. There is no consensus promoter sequence. A simple eight–base pair AT-rich region is sufficient to initiate gene transcription in this organism. Thus, the main control of gene expression may occur after the stage of transcription. The presence of Dicer and Argonaute homologs in Giardia suggested that microRNA (miRNA)-mediated translational repression could be one mechanism of gene regulation. In this work, we characterized the presence of the miRNA pathway in Giardia as well as identified the novel use of small nucleolar RNA (snoRNA) as miRNA precursors. Potential target sites for one small RNA (miR2) were identified with the miRanda program. In vivo reporter assays confirmed the specific interaction between the target sites and miR2. A ribozyme-mediated reduction of Dicer and Argonaute in Giardia showed that the former is required for miR2 production whereas the latter functions in mediating the inhibition of reporter expression, which agrees with the roles of these two proteins. This is the first evidence of miRNA-mediated gene regulation in Giardia and the first demonstration of the use of snoRNAs as miRNA precursors.

Arthur Lau,  Ralph Weinstein,  D Bartel … (2001)
Two small temporal RNAs (stRNAs), lin-4 and let-7, control developmental timing in Caenorhabditis elegans. We find that these two regulatory RNAs are members of a large class of 21- to 24-nucleotide noncoding RNAs, called microRNAs (miRNAs). We report on 55 previously unknown miRNAs in C. elegans. The miRNAs have diverse expression patterns during development: a let-7 paralog is temporally coexpressed with let-7; miRNAs encoded in a single genomic cluster are coexpressed during embryogenesis; and still other miRNAs are expressed constitutively throughout development. Potential orthologs of several of these miRNA genes were identified in Drosophila and human genomes. The abundance of these tiny RNAs, their expression patterns, and their evolutionary conservation imply that, as a class, miRNAs have broad regulatory functions in animals.

Robert D. Finn,  Jaina Mistry,  Benjamin Schuster-Böckler … (2005)
Pfam is a database of protein families that currently contains 7973 entries (release 18.0). A recent development in Pfam has enabled the grouping of related families into clans. Pfam clans are described in detail, together with the new associated web pages. Improvements to the range of Pfam web tools and the first set of Pfam web services that allow programmatic access to the database and associated tools are also presented. Pfam is available on the web in the UK (), the USA (), France () and Sweden ().

Angelo Calado,  Ulrike Kutay,  Maria Lund … (2004)
MicroRNAs (miRNAs), which function as regulators of gene expression in eukaryotes, are processed from larger transcripts by sequential action of nuclear and cytoplasmic ribonuclease III-like endonucleases. We show that Exportin-5 (Exp5) mediates efficient nuclear export of short miRNA precursors (pre-miRNAs) and that its depletion by RNA interference results in reduced miRNA levels. Exp5 binds correctly processed pre-miRNAs directly and specifically, in a Ran guanosine triphosphate-dependent manner, but interacts only weakly with extended pre-miRNAs that yield incorrect miRNAs when processed by Dicer in vitro. Thus, Exp5 is key to miRNA biogenesis and may help coordinate nuclear and cytoplasmic processing steps.

Publisher ID: 08-PLPA-RA-0742R3
DOI: 10.1371/journal.ppat.1000224
PMC ID: 2583053
PubMed ID: 19043559
Copyright statement: Saraiya and Wang. This is an open-access article distributed under the terms of the Creative Commons Attribution License, which permits unrestricted use, distribution, and reproduction in any medium, provided the original author and source are credited.