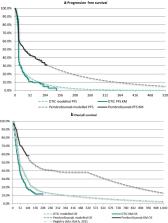 A partitioned-survival model based on data from a recent randomized phase 3 study (KEYNOTE-006) and meta-analysis was used to derive time in PFS, OS, and post-progression survival for pembrolizumab and chemotherapy, such as dacarbazine (DTIC), temozolomide (TMZ), and the paclitaxel-carboplatin combination (PC). A combination of clinical trial data, published data, results of meta-analysis, and melanoma registry data was used to extrapolate PFS and OS curves. The base-case time horizon for the model was 30 years with costs and health outcomes discounted at a rate of 5% per year. Individual patient level data on utilities and frequencies of adverse events were obtained from the final analysis of KEYNOTE-006 (cut-off date: 3-Dec-15) for pembrolizumab. Cost data included drug acquisition, treatment administration, adverse event management, and clinical management of advanced melanoma. The distribution of patient weight from the Hong Kong population was applied to calculate the drug costs. Analyses were performed from a payer’s perspective. The incremental cost effectiveness ratio (ICER) expressed as cost in US Dollars (USD) per quality-adjusted life years (QALYs) was the main outcome.

In base-case scenario, the ICER for pembrolizumab as a first-line treatment for advanced melanoma was USD49,232 compared to DTIC, with the ICER values lower than cost-effectiveness threshold in Hong Kong. Results comparing pembrolizumab to TMZ and to PC were similar to that when compared to DTIC. Probability sensitivity analyses showed that 99% of the simulated ICERs were below three times the Gross Domestic Product (GDP) per capita for Hong Kong (currently at $119,274//QALY threshold). In a scenario analysis comparing pembrolizumab with ipilimumab, the estimated ICER was USD8,904.

Pembrolizumab is cost-effective relative to chemotherapy (DTIC, TMZ and PC), and highly-cost-effective compared to ipilimumab, for the first-line treatment of advanced melanoma in Hong Kong.

Sanjiv Agarwala (2009)
Metastatic melanoma remains a lethal disease with a long-term remission rate of less than 10%. Despite many years of research, there has not been a new drug approved in this disease in over two decades. Single-agent chemotherapy is palliative in some patients and there is no advantage of combination chemotherapy or chemo-immunotherapy in randomized trials. High-dose bolus IL-2 produces some long-term remissions and is available for highly selected individuals at selected centers in the USA but is impractical for most patients. Research is ongoing in exploring novel immunotherapeutic and targeted approaches. The status of recently completed and ongoing trials is discussed in this review.

Karen Kuntz,  Gabriel Leung,  Andrew K C Lam … (2007)
Although the cost effectiveness of screening mammography in most western developed populations has been accepted, it may not apply to Chinese women, who have a much lower breast cancer incidence. The authors estimated the cost effectiveness of biennial mammography in Hong Kong Chinese women to inform evidence-based screening policies. For the current study, a state-transition Markov model was developed to simulate mammography screening, breast cancer diagnosis, and treatment in a hypothetical cohort of Chinese women. The benefit of mammography was modeled by assuming a stage shift, in which cancers in screened women were more likely to be diagnosed at an earlier disease stage. The authors compared costs, quality-adjusted life years (QALYs) saved, and life years saved (LYS) for 5 screening strategies. Biennial screening resulted in a gain in life expectancy ranging from 4.3 days to 9.4 days compared with no screening at an incremental cost of from US $1,166 to US $2,425 per woman. The least costly, nondominated screening option was screening from ages 40 years to 69 years, with an incremental cost-effectiveness ratio (ICER) of US $61,600 per QALY saved or US $64,400 per LYS compared with no screening. In probabilistic sensitivity analyses, the probability of the ICER being below a threshold of US $50,000 per QALY (LYS) was 15.3% (14.6%). The current results suggested that mammography for Hong Kong Chinese women currently may not be cost effective based on the arbitrary threshold of US $50,000 per QALY. However, clinicians must remain vigilant and periodically should revisit the question of population screening: Disease rates in China have been increasing because of westernization and socioeconomic development.