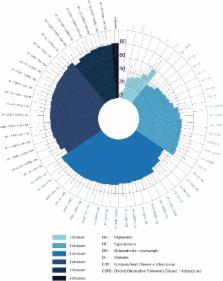 To describe the potential workload for patients with multimorbidity when applying existing clinical practice guidelines.

From the guidelines, we extracted all recommended health-related activities (HRAs) such as drug management, self-monitoring, visits to the doctor, laboratory tests and changes of lifestyle for a patient aged 45–64 years with moderate severity of conditions.

Depending on the concomitant chronic condition, patients with 3 chronic conditions complying with all the guidelines would have to take a minimum of 6 to a maximum of 13 medications per day, visit a health caregiver a minimum of 1.2 to a maximum of 5.9 times per month and spend a mean (SD) of 49.6 (27.3) to 71.0 (34.5) h/month in HRAs. The potential workload increased greatly with increasing number of concomitant conditions, rising to 18 medications per day, 6.6 visits per month and 80.7 (35.8) h/month in HRAs for patients with 6 chronic conditions.

Relationship between adherence to evidence-based pharmacotherapy and long-term mortality after acute myocardial infarction.

David Alter,  Alice Chong,  N Rasmussen (2007)
The extent to which drug adherence may affect survival remains unclear, in part because mortality differences may be attributable to "healthy adherer" behavioral attributes more so than to pharmacological benefits. To explore the relationship between drug adherence and mortality in survivors of acute myocardial infarction (AMI). Population-based, observational, longitudinal study of 31 455 elderly AMI survivors between 1999 and 2003 in Ontario. All patients filled a prescription for statins, beta-blockers, or calcium channel blockers, with the latter drug considered a control given the absence of clinical trial-proven survival benefits. Patient adherence was subdivided a priori into 3 categories--high (proportion of days covered, > or =80%), intermediate (proportion of days covered, 40%-79%), and low (proportion of days covered, <40%)--and compared with long-term mortality (median of 2.4 years of follow-up) using multivariable survival models (and propensity analyses) adjusted for sociodemographic factors, illness severity, comorbidities, and concomitant use of evidence-based therapies. Among statin users, compared with their high-adherence counterparts, the risk of mortality was greatest for low adherers (deaths in 261/1071 (24%) vs 2310/14,345 (16%); adjusted hazard ratio, 1.25; 95% confidence interval, 1.09-1.42; P = .001) and was intermediary for intermediate adherers (deaths in 472/2407 (20%); adjusted hazard ratio, 1.12; 95% confidence interval, 1.01-1.25; P = .03). A similar but less pronounced dose-response-type adherence-mortality association was observed for beta-blockers. Mortality was not associated with adherence to calcium channel blockers. Moreover, sensitivity analyses demonstrated no relationships between drug adherence and cancer-related admissions, outcomes for which biological plausibility do not exist. The long-term survival advantages associated with improved drug adherence after AMI appear to be class-specific, suggesting that adherence outcome benefits are mediated by drug effects and do not merely reflect an epiphenomenon of "healthy adherer" behavioral attributes.

Guidelines for people not for diseases: the challenges of applying UK clinical guidelines to people with multimorbidity.

Marion McMurdo,  Michael D. Hughes,  Bruce Guthrie (2012)
currently one of the major challenges facing clinical guidelines is multimorbidity. Current guidelines are not designed to consider the cumulative impact of treatment recommendations on people with several conditions, nor to allow comparison of relative benefits or risks. This is despite the fact that multimorbidity is a common phenomenon. to examine the extent to which National Institute of Health and Clinical Excellence (NICE) guidelines address patient comorbidity, patient centred care and patient compliance to treatment recommendations. five NICE clinical guidelines were selected for review (type-2 diabetes mellitus, secondary prevention for people with myocardial infarction, osteoarthritis, chronic obstructive pulmonary disease and depression) as these conditions are common causes of comorbidity and the guidelines had all been produced since 2007. Two authors extracted information from each full guideline and noted the extent to which the guidelines accounted for patient comorbidity, patient centred care and patient compliance. The cumulative recommended treatment, follow-up and self-care regime for two hypothetical patients were then created to illustrate the potential cumulative impact of applying single disease recommendations to people with multimorbidity. comorbidity and patient adherence were inconsistently accounted for in the guidelines, ranging from extensive discussion to none at all. Patient centred care was discussed in generic terms across the guidelines with limited disease-specific recommendations for clinicians. Explicitly following guideline recommendations for our two hypothetical patients would lead to a considerable treatment burden, even when recommendations were followed for mild to moderate conditions. In addition, the follow-up and self-care regime was complex potentially presenting problems for patient compliance. clinical guidelines have played an important role in improving healthcare for people with long-term conditions. However, in people with multimorbidity current guideline recommendations rapidly cumulate to drive polypharmacy, without providing guidance on how best to prioritise recommendations for individuals in whom treatment burden will sometimes be overwhelming.

Katie I Gallacher,  Carl R May,  Victor Montori … (2015)
Our goal was to assess the burden associated with treatment among patients living with chronic heart failure and to determine whether Normalization Process Theory (NPT) is a useful framework to help describe the components of treatment burden in these patients. We performed a secondary analysis of qualitative interview data, using framework analysis, informed by NPT, to determine the components of patient "work." Participants were 47 patients with chronic heart failure managed in primary care in the United Kingdom who had participated in an earlier qualitative study about living with this condition. We identified and examined data that fell outside of the coding frame to determine if important concepts or ideas were being missed by using the chosen theoretical framework. We were able to identify and describe components of treatment burden as distinct from illness burden using the framework. Treatment burden in chronic heart failure includes the work of developing an understanding of treatments, interacting with others to organize care, attending appointments, taking medications, enacting lifestyle measures, and appraising treatments. Factors that patients reported as increasing treatment burden included too many medications and appointments, barriers to accessing services, fragmented and poorly organized care, lack of continuity, and inadequate communication between health professionals. Patient "work" that fell outside of the coding frame was exclusively emotional or spiritual in nature. We identified core components of treatment burden as reported by patients with chronic heart failure. The findings suggest that NPT is a theoretical framework that facilitates understanding of experiences of health care work at the individual, as well as the organizational, level. Although further exploration and patient endorsement are necessary, our findings lay the foundation for a new target for treatment and quality improvement efforts toward patient-centered care.