A bioinformatic and mechanistic study elicits the antifibrotic effect of ursolic acid through the attenuation of oxidative stress with the involvement of ERK, PI3K/Akt, and p38 MAPK signaling pathways in human hepatic stellate cells and rat liver 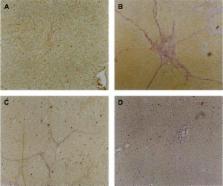 NADPH oxidases (NOXs) are a predominant mediator of redox homeostasis in hepatic stellate cells (HSCs), and oxidative stress plays an important role in the pathogenesis of liver fibrosis. Ursolic acid (UA) is a pentacyclic triterpenoid with various pharmacological activities, but the molecular targets and underlying mechanisms for its antifibrotic effect in the liver remain elusive. This study aimed to computationally predict the molecular interactome and mechanistically investigate the antifibrotic effect of UA on oxidative stress, with a focus on NOX4 activity and cross-linked signaling pathways in human HSCs and rat liver. Drug–drug interaction via chemical–protein interactome tool, a server that can predict drug–drug interaction via chemical–protein interactome, was used to predict the molecular targets of UA, and Database for Annotation, Visualization, and Integrated Discovery was employed to analyze the signaling pathways of the predicted targets of UA. The bioinformatic data showed that there were 611 molecular proteins possibly interacting with UA and that there were over 49 functional clusters responding to UA. The subsequential benchmarking data showed that UA significantly reduced the accumulation of type I collagen in HSCs in rat liver, increased the expression level of MMP-1, but decreased the expression level of TIMP-1 in HSC-T6 cells. UA also remarkably reduced the gene expression level of type I collagen in HSC-T6 cells. Furthermore, UA remarkably attenuated oxidative stress via negative regulation of NOX4 activity and expression in HSC-T6 cells. The employment of specific chemical inhibitors, SB203580, LY294002, PD98059, and AG490, demonstrated the involvement of ERK, PI3K/Akt, and p38 MAPK signaling pathways in the regulatory effect of UA on NOX4 activity and expression. Collectively, the antifibrotic effect of UA is partially due to the oxidative stress attenuating effect through manipulating NOX4 activity and expression. The results suggest that UA may act as a promising antifibrotic agent. More studies are warranted to evaluate the safety and efficacy of UA in the treatment of liver fibrosis.

Hong-Hui Wang,  Sandeep J. Joseph (1999)
Oxidative stress (OS) has been implicated in various degenerative diseases in aging. In an attempt to quantify OS in a cell model, we examined OS induced by incubating for 30 min with various free radical generators in PC12 cells by using the dichlorofluorescein (DCF) assay, modified for use by a fluorescent microplate reader. The nonfluorescent fluorescin derivatives (dichlorofluorescin, DCFH), after being oxidized by various oxidants, will become DCF and emit fluorescence. By quantifying the fluorescence, we were able to quantify the OS. Our results indicated that the fluorescence varied linearly with increasing concentrations (between 0.1 and 1 mM) of H2O2 and 2,2'-azobios(2-amidinopropane) dihydrochloride (AAPH; a peroxyl radical generator). By contrast, the fluorescence varied as a nonlinear response to increasing concentrations of 3-morpholinosydnonimine hydrochloride (SIN-1; a peroxynitrite generator), sodium nitroprusside (SNP; a nitric oxide generator), and dopamine. Dopamine had a biphasic effect; it decreased the DCF fluorescence, thus acting as an antioxidant, at concentrations <500 microM in cells, but acted as a pro-oxidant by increasing the fluorescence at 1 mM. While SNP was not a strong pro-oxidant, SIN-1 was the most potent pro-oxidant among those tested, inducing a 70 times increase of fluorescence at a concentration of 100 microM compared with control. Collectively, due to its indiscriminate nature to various free radicals, DCF can be very useful in quantifying overall OS in cells, especially when used in conjunction with a fluorescent microplate reader. This method is reliable and efficient for evaluating the potency of pro-oxidants and can be used to evaluate the efficacy of antioxidants against OS in cells.

W Jennings,  Tessa Davis,  Thierry Poynard … (2010)
The prevalence of chronic hepatitis C (CH-C) remains high and the complications of infection are common. Our goal was to project the future prevalence of CH-C and its complications. We developed a multicohort natural history model to overcome limitations of previous models for predicting disease outcomes and benefits of therapy. Prevalence of CH-C peaked in 2001 at 3.6 million. Fibrosis progression was inversely related to age at infection, so cirrhosis and its complications were most common after the age of 60 years, regardless of when infection occurred. The proportion of CH-C with cirrhosis is projected to reach 25% in 2010 and 45% in 2030, although the total number with cirrhosis will peak at 1.0 million (30.5% higher than the current level) in 2020 and then decline. Hepatic decompensation and liver cancer will continue to increase for another 10 to 13 years. Treatment of all infected patients in 2010 could reduce risk of cirrhosis, decompensation, cancer, and liver-related deaths by 16%, 42%, 31%, and 36% by 2020, given current response rates to antiviral therapy. Prevalence of hepatitis C cirrhosis and its complications will continue to increase through the next decade and will mostly affect those older than 60 years of age. Current treatment patterns will have little effect on these complications, but wider application of antiviral treatment and better responses with new agents could significantly reduce the impact of this disease in coming years.