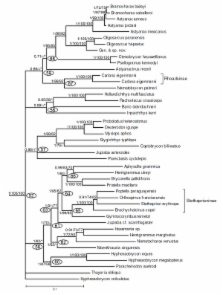 With nearly 1,100 species, the fish family Characidae represents more than half of the species of Characiformes, and is a key component of Neotropical freshwater ecosystems. The composition, phylogeny, and classification of Characidae is currently uncertain, despite significant efforts based on analysis of morphological and molecular data. No consensus about the monophyly of this group or its position within the order Characiformes has been reached, challenged by the fact that many key studies to date have non-overlapping taxonomic representation and focus only on subsets of this diversity.

In the present study we propose a new definition of the family Characidae and a hypothesis of relationships for the Characiformes based on phylogenetic analysis of DNA sequences of two mitochondrial and three nuclear genes (4,680 base pairs). The sequences were obtained from 211 samples representing 166 genera distributed among all 18 recognized families in the order Characiformes, all 14 recognized subfamilies in the Characidae, plus 56 of the genera so far considered incertae sedis in the Characidae. The phylogeny obtained is robust, with most lineages significantly supported by posterior probabilities in Bayesian analysis, and high bootstrap values from maximum likelihood and parsimony analyses.

A monophyletic assemblage strongly supported in all our phylogenetic analysis is herein defined as the Characidae and includes the characiform species lacking a supraorbital bone and with a derived position of the emergence of the hyoid artery from the anterior ceratohyal. To recognize this and several other monophyletic groups within characiforms we propose changes in the limits of several families to facilitate future studies in the Characiformes and particularly the Characidae. This work presents a new phylogenetic framework for a speciose and morphologically diverse group of freshwater fishes of significant ecological and evolutionary importance across the Neotropics and portions of Africa.

An index of substitution saturation and its application.

Xuhua Xia, Zheng Xie, Marco Salemi … (2003)
We introduce a new index to measure substitution saturation in a set of aligned nucleotide sequences. The index is based on the notion of entropy in information theory. We derive the critical values of the index based on computer simulation with different sequence lengths, different number of OTUs and different topologies. The critical value enables researchers to quickly judge whether a set of aligned sequences is useful in phylogenetics. We illustrate the index by applying it to an analysis of the aligned sequences of the elongation factor-1alpha gene originally used to resolve the deep phylogeny of major arthropod groups. The method has been implemented in DAMBE.

Multiple sources of character information and the phylogeny of Hawaiian drosophilids.

R. Frank Baker, R. DeSalle (1997)
Relationships among representatives of the five major Hawaiian Drosophila species groups were examined using data from eight different gene regions. A simultaneous analysis of these data resulted in a single most-parsimonious tree that (1) places the adiastola picture-winged subgroup as sister taxon to the other picture-winged subgroups, (2) unites the modified-tarsus species group with flies from the Antopocerus species group, and (3) places the white-tip scutellum species group as the most basal taxon. Because of the different gene sources used in this study, numerous process partitions can be erected within this data set. We examined the incongruence among these various partitions and the ramifications of these data for the taxonomic consensus, prior agreement, and simultaneous analysis approaches to phylogenetic reconstruction. Separate analyses and taxonomic consensus appear to be inadequate methods for dealing with the partitions in this study. Although detection of incongruence is possible and helps elucidate particular areas of disagreement among data sets, separation of partitions on the basis of incongruence is problematic for many reasons. First, analyzing all genes separately and then either presenting them all as possible hypotheses or taking their consensus provides virtually no information concerning the relationships among these flies. Second, despite some evidence of incongruence, there are no clear delineations among the various gene partitions that separate only heterogeneous data. Third, to the extent that problematic genes can be identified, these genes have nearly the same information content, within a combined analysis framework, as the remaining nonproblematic genes. Our data suggest that significant incongruence among data partitions may be isolated to specific relationships and the "false" signal creating this incongruence is most likely to be overcome by a simultaneous analysis. We present a new method, partitioned Bremer support, for examining the contribution of a particular data partition to the topological support of the simultaneous analysis tree.