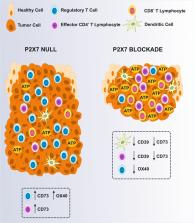 In the tumor microenvironment (TME) ATP and its receptor P2X7 exert a pivotal influence on cancer growth and tumor–host interactions. Here we analyzed the different effect of P2X7 genetic deficiency versus its antagonism on response against P2X7-expressing implanted tumors. We focused on immune cell expression of ATP degrading enzymes CD39 and CD73 and in vivo measured TME’s ATP. The immune infiltrate of tumors growing in P2X7 null mice shows a decrease in CD8 + cells and an increased number of Tregs, overexpressing the fitness markers OX40, PD-1, and CD73. A similar Treg phenotype is also present in the spleen of tumor-bearing P2X7 null mice and it is paralleled by a decrease in proinflammatory cytokines and an increase in TGF-β. Differently, systemic administration of the P2X7 blocker A740003 in wild-type mice left unaltered the number of tumor-infiltrating CD8 + and Treg lymphocytes but increased CD4 + effector cells and decreased their expression of CD39 and CD73. P2X7 blockade did not affect spleen immune cell composition or ectonucleotidase expression but increased circulating INF-γ. Augmented CD73 in P2X7 null mice was mirrored by a decrease in TME ATP concentration and nucleotide reduced secretion from immune cells. On the contrary, TME ATP levels remained unaltered upon P2X7 antagonism, owing to release of ATP from cancerous cells and diminished ectonucleotidase expression by CD4 + and dendritic cells. These data point at P2X7 receptor as a key determinant of TME composition due to its combined action on immune cell infiltrate, ectonucleotidases, and ATP release.

Patrizia Pellegatti,  Lizzia Raffaghello,  Giovanna Bianchi … (2008)
Background There is growing awareness that tumour cells build up a “self-advantageous” microenvironment that reduces effectiveness of anti-tumour immune response. While many different immunosuppressive mechanisms are likely to come into play, recent evidence suggests that extracellular adenosine acting at A2A receptors may have a major role in down-modulating the immune response as cancerous tissues contain elevated levels of adenosine and adenosine break-down products. While there is no doubt that all cells possess plasma membrane adenosine transporters that mediate adenosine uptake and may also allow its release, it is now clear that most of extracellularly-generated adenosine originates from the catabolism of extracellular ATP. Methodology/Principal Findings Measurement of extracellular ATP is generally performed in cell supernatants by HPLC or soluble luciferin-luciferase assay, thus it generally turns out to be laborious and inaccurate. We have engineered a chimeric plasma membrane-targeted luciferase that allows in vivo real-time imaging of extracellular ATP. With this novel probe we have measured the ATP concentration within the tumour microenvironment of several experimentally-induced tumours. Conclusions/Significance Our results show that ATP in the tumour interstitium is in the hundrends micromolar range, while it is basically undetectable in healthy tissues. Here we show that a chimeric plasma membrane-targeted luciferase allows in vivo detection of high extracellular ATP concentration at tumour sites. On the contrary, tumour-free tissues show undetectable extracellular ATP levels. Extracellular ATP may be crucial for the tumour not only as a stimulus for growth but also as a source of an immunosuppressive agent such as adenosine. Our approach offers a new tool for the investigation of the biochemical composition of tumour milieu and for development of novel therapies based on the modulation of extracellular purine-based signalling.

Konrad Wilhelm,  Jayanthi Ganesan,  Tobias Müller … (2010)
Danger signals released upon cell damage can cause excessive immune-mediated tissue destruction such as that found in acute graft-versus-host disease (GVHD), allograft rejection and systemic inflammatory response syndrome. Given that ATP is found in small concentrations in the extracellular space under physiological conditions, and its receptor P2X(7)R is expressed on several immune cell types, ATP could function as a danger signal when released from dying cells. We observed increased ATP concentrations in the peritoneal fluid after total body irradiation, and during the development of GVHD in mice and in humans. Stimulation of antigen-presenting cells (APCs) with ATP led to increased expression of CD80 and CD86 in vitro and in vivo and actuated a cascade of proinflammatory events, including signal transducer and activator of transcription-1 (STAT1) phosphorylation, interferon-γ (IFN-γ) production and donor T cell expansion, whereas regulatory T cell numbers were reduced. P2X(7)R expression increased when GVHD evolved, rendering APCs more responsive to the detrimental effects of ATP, thereby providing positive feedback signals. ATP neutralization, early P2X(7)R blockade or genetic deficiency of P2X(7)R during GVHD development improved survival without immune paralysis. These data have major implications for transplantation medicine, as pharmacological interference with danger signals that act via P2X(7)R could lead to the development of tolerance without the need for intensive immunosuppression.

Obstacles Posed by the Tumor Microenvironment to T cell Activity: A Case for Synergistic Therapies.