The Effect of Coenzyme Q10 Supplementation on Vascular Endothelial Growth Factor and Serum Levels of Interleukin 6 and 8 in Women with Breast Cancer: A Double-Blind, Placebo-Controlled, Randomized Clinical Trial 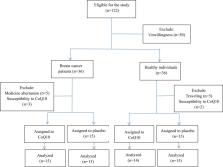 To better evaluate the efficacy of CoQ10 on the inflammatory markers in breast cancer patients, we conducted a clinical study of patients with breast cancer undergoing tamoxifen therapy. CoQ10 serves as an antioxidant and inhibits oxidation caused by reactive oxygen species. The aim of the current study was to assess the effect of coenzyme Q10 supplementation on serum levels of interleukin 6, 8, and vascular endothelial growth factor (VEGF) in patients with breast cancer undergoing tamoxifen therapy by a double-blind, placebo-controlled, randomized clinical trial.

In the study, 30 breast cancer patients and 29 healthy subjects were randomized into four groups. Two groups of intervention received 100 mg CoQ10, and two control groups took placebo once a day for 2 months. Blood draws were obtained at baseline and at the end of the study. Serum levels of IL-6, IL-8 and VEGF were analyzed using ELISA kits.

The data of the 59 participants were analyzed. Supplementation with CoQ10 demonstrated a significant decrease in IL-8 and IL-6 serum levels compared to placebo (P< 0.05). Although the downward trend was evident, CoQ10 supplementation did not reveal any significant effect on serum VEGF concentration. The group of patients who received supplements showed the most reduction in serum levels of cytokines among other groups.

CoQ10 supplementation could be effective in ameliorating inflammatory cytokine levels, thereby reducing the consequences of inflammation caused by breast cancer. To generalize the results, larger and longer intervention studies with higher safe doses are needed and should take account of possible costs and harms as well as benefits (registration number: IRCT2015042021874N1).

Meisam Sanoobar,  Shahryar Eghtesadi,  Amirreza Azimi … (2015)
Multiple sclerosis (MS) is an immune-mediated neurodegenerative disease of central nervous system and recent studies show that inflammatory processes are highly associated with neurodegeneration in the brain. The purpose of this study was to investigate the effect of coenzyme Q10 supplementation on inflammatory and anti-inflammatory markers in patients with MS.

Juan Garrido-Maraver,  Mario Cordero,  Manuel Oropesa-Ávila … (2014)
For a number of years, coenzyme Q10 (CoQ10) was known for its key role in mitochondrial bioenergetics; later studies demonstrated its presence in other subcellular fractions and in blood plasma, and extensively investigated its antioxidant role. These 2 functions constitute the basis for supporting the clinical use of CoQ10. Also, at the inner mitochondrial membrane level, CoQ10 is recognized as an obligatory cofactor for the function of uncoupling proteins and a modulator of the mitochondrial transition pore. Furthermore, recent data indicate that CoQ10 affects the expression of genes involved in human cell signaling, metabolism and transport, and some of the effects of CoQ10 supplementation may be due to this property. CoQ10 deficiencies are due to autosomal recessive mutations, mitochondrial diseases, aging-related oxidative stress and carcinogenesis processes, and also statin treatment. Many neurodegenerative disorders, diabetes, cancer, and muscular and cardiovascular diseases have been associated with low CoQ10 levels as well as different ataxias and encephalomyopathies. CoQ10 treatment does not cause serious adverse effects in humans and new formulations have been developed that increase CoQ10 absorption and tissue distribution. Oral administration of CoQ10 is a frequent antioxidant strategy in many diseases that may provide a significant symptomatic benefit.

Constance Schmelzer,  Gerti Lorenz,  Gerald Rimbach … (2008)
Ubiquinol-10 (QH2), the reduced form of Coenzyme Q10 (CoQ10) serves as a potent antioxidant of lipid membranes. Because many antioxidants reveal potent anti-inflammatory effects, the influence of QH2 on lipopolysaccharide (LPS)-induced pro-inflammatory cytokines and chemokines were determined in the human monocytic cell line THP-1. Stimulation of cells with LPS resulted in a distinct release of Tumour necrosis factor-alpha (TNF-α), Macrophage inflammatory protein-1 alpha (MIP-1α), Regulated upon activation, normal T cell expressed and secreted (RANTES) and Monocyte chemotattractant protein-1 (MCP-1). The LPS-induced responses were significantly decreased by pre-incubation of cells with QH2 to 60.27 ± 9.3% (p = 0.0009), 48.13 ± 6.93% (p = 0.0007) and 74.36 ± 7.25% (p = 0.008) for TNF-α, MIP-1α and RANTES, respectively. In conclusion, our results indicate anti-inflammatory effects of the reduced form of CoQ10 on various proinflammatory cytokines and chemokines in vitro.

This study was supported by the intramural grant of the Vice-Chancellor for Research at Ahvaz Jundishapur University of Medical Sciences.