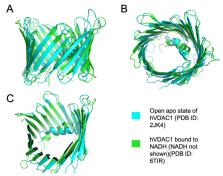 The voltage-dependent anion channel (VDAC) is a β-barrel membrane protein located in the outer mitochondrial membrane (OMM). VDAC has two conductance states: an open anion selective state, and a closed and slightly cation-selective state. VDAC conductance states play major roles in regulating permeability of ATP/ADP, regulation of calcium homeostasis, calcium flux within ER-mitochondria contact sites, and apoptotic signaling events. Three reported structures of VDAC provide information on the VDAC open state via X-ray crystallography and nuclear magnetic resonance (NMR). Together, these structures provide insight on how VDAC aids metabolite transport. The interaction partners of VDAC, together with the permeability of the pore, affect the molecular pathology of diseases including Parkinson’s disease (PD), Friedreich’s ataxia (FA), lupus, and cancer. To fully address the molecular role of VDAC in disease pathology, major questions must be answered on the structural conformers of VDAC. For example, further information is needed on the structure of the closed state, how binding partners or membrane potential could lead to the open/closed states, the function and mobility of the N-terminal α-helical domain of VDAC, and the physiological role of VDAC oligomers. This review covers our current understanding of the various states of VDAC, VDAC interaction partners, and the roles they play in mitochondrial regulation pertaining to human diseases.

Moritz von Winterfeld,  J Boniface,  Sudhir Sahasrabudhe … (2007)
Therapeutics that discriminate between the genetic makeup of normal cells and tumour cells are valuable for treating and understanding cancer. Small molecules with oncogene-selective lethality may reveal novel functions of oncoproteins and enable the creation of more selective drugs. Here we describe the mechanism of action of the selective anti-tumour agent erastin, involving the RAS-RAF-MEK signalling pathway functioning in cell proliferation, differentiation and survival. Erastin exhibits greater lethality in human tumour cells harbouring mutations in the oncogenes HRAS, KRAS or BRAF. Using affinity purification and mass spectrometry, we discovered that erastin acts through mitochondrial voltage-dependent anion channels (VDACs)--a novel target for anti-cancer drugs. We show that erastin treatment of cells harbouring oncogenic RAS causes the appearance of oxidative species and subsequent death through an oxidative, non-apoptotic mechanism. RNA-interference-mediated knockdown of VDAC2 or VDAC3 caused resistance to erastin, implicating these two VDAC isoforms in the mechanism of action of erastin. Moreover, using purified mitochondria expressing a single VDAC isoform, we found that erastin alters the permeability of the outer mitochondrial membrane. Finally, using a radiolabelled analogue and a filter-binding assay, we show that erastin binds directly to VDAC2. These results demonstrate that ligands to VDAC proteins can induce non-apoptotic cell death selectively in some tumour cells harbouring activating mutations in the RAS-RAF-MEK pathway.

Nicolas M. Brunet,  P Laurent-Puig,  L Galluzzi … (2006)
In healthy cells, cytochrome c (Cyt c) is located in the mitochondrial intermembrane/intercristae spaces, where it functions as an electron shuttle in the respiratory chain and interacts with cardiolipin (CL). Several proapoptotic stimuli induce the permeabilization of the outer membrane, facilitate the communication between intermembrane and intercristae spaces and promote the mobilization of Cyt c from CL, allowing for Cyt c release. In the cytosol, Cyt c mediates the allosteric activation of apoptosis-protease activating factor 1, which is required for the proteolytic maturation of caspase-9 and caspase-3. Activated caspases ultimately lead to apoptotic cell dismantling. Nevertheless, cytosolic Cyt c has been associated also to vital cell functions (i.e. differentiation), suggesting that its release not always occurs in an all-or-nothing fashion and that mitochondrial outer membrane permeabilization may not invariably lead to cell death. This review deals with the events involved in Cyt c release from mitochondria, with special attention to its regulation and final consequences.

Sophia Lunt,  Matthew Vander Heiden (2010)
Warburg's observation that cancer cells exhibit a high rate of glycolysis even in the presence of oxygen (aerobic glycolysis) sparked debate over the role of glycolysis in normal and cancer cells. Although it has been established that defects in mitochondrial respiration are not the cause of cancer or aerobic glycolysis, the advantages of enhanced glycolysis in cancer remain controversial. Many cells ranging from microbes to lymphocytes use aerobic glycolysis during rapid proliferation, which suggests it may play a fundamental role in supporting cell growth. Here, we review how glycolysis contributes to the metabolic processes of dividing cells. We provide a detailed accounting of the biosynthetic requirements to construct a new cell and illustrate the importance of glycolysis in providing carbons to generate biomass. We argue that the major function of aerobic glycolysis is to maintain high levels of glycolytic intermediates to support anabolic reactions in cells, thus providing an explanation for why increased glucose metabolism is selected for in proliferating cells throughout nature.