Incidence, Risk Factors, and Comorbidities of Vocal Cord Paralysis After Surgical Closure of a Patent Ductus Arteriosus: A Meta-analysis 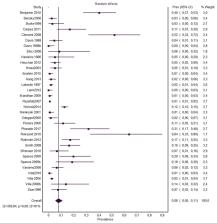 Surgical closure of a patent ductus arteriosus (PDA) is considered standard treatment for symptomatic neonates refractory to medical therapy. Sometimes, iatrogenic injury to the left recurrent laryngeal nerve during the procedure can result in vocal cord paralysis (VCP). This study aimed to estimate the incidence of VCP in patients after surgical PDA closure and to identify any associated risk factors and morbidities associated with VCP in the preterm infant population. A thorough search of the major electronic databases was conducted to identify studies eligible for inclusion into this meta-analysis. Studies reporting data on the incidence of VCP (primary outcomes) or risk factors and morbidities associated with VCP in premature infant population (secondary outcomes) were included. A total of 33 studies ( n = 4887 patients) were included into the analysis. Overall pooled incidence estimate of VCP was 7.9% (95%CI 5.3–10.9). The incidence of VCP after PDA closure was significantly much higher in premature infants (11.2% [95%CI 7.0–16.3]) than in non-premature patients (3.0% [95%CI 1.5–4.9]). The data showed that VCP was most common after surgical ligation and in studies conducting universal laryngoscopy scoping. The risk factors for postoperative VCP in preterm infants included birth weight and gestational age. In addition, VCP was significantly associated with the occurrence of bronchopulmonary dysplasia, gastrostomy tube insertion, and increased duration of mechanical ventilation. Vocal cord paralysis remains a frequent complication of surgical closure of a PDA, especially in premature neonates, and is associated with significant post-procedural complications.

Critical appraisal of the health research literature: prevalence or incidence of a health problem.

James Stratford,  Anna L. Chambers,  J. Roberts … (1997)
This article identifies and discusses criteria that can be used by health professionals to critically appraise research articles that estimate the prevalence or incidence of a disease or health problem. These guidelines will help determine the validity and usefulness of such community assessment studies. The criteria relate to the validity of the study methods (design, sampling frame, sample size, outcome measures, measurement and response rate), interpretation of the results and applicability of the findings. The research question "What is the prevalence of dementia in Canada?" is used as an example for this paper.

David K. Stevenson,  Linda L Wright,  James A Lemons … (1998)
Our purpose was to determine the mortality and morbidity rates for infants weighing 501 to 1500 g according to gestational age, birth weight, and gender. Perinatal data were collected prospectively on an inborn cohort from January 1993 through December 1994 by 12 participating centers of the National Institute of Child Health and Human Development Neonatal Research Network and were compared with the corresponding data from previous reports. Sociodemographic factors, perinatal events, and the neonatal course to 120 days of life, discharge, or death were evaluated. Eighty-three percent of infants survived until discharge to home or to a long- term care facility (compared with 74% in 1988). Survival to discharge was 49% for infants weighing 501 to 750 g at birth, 85% for those 751 to 1000 g, 93% for those 1001 to 1250 g, and 96% for those 1251 to 1500 g. The majority of deaths occurred within the first 3 days of life. Mortality rates were greater for male than for female infants. Respiratory distress syndrome was the most frequent pulmonary disease (52%). Chronic lung disease (defined as an oxygen requirement at 36 weeks after conception) developed in 19%. Thirty-two percent of infants had evidence of intracranial hemorrhage. Periventricular leukomalacia was noted in 6% of infants who had ultrasonography after 2 weeks. The average duration of hospitalization for survivors was 68 days (122 days for surviving infants weighing 501 to 750 g, compared with an average of 43 days for surviving infants 1251 to 1500 g). Among infants who died, the average length of stay was 19 days. The mortality rate for infants weighing between 501 and 1500 g at birth continues to decline. This increase in survival is not accompanied by an increase in medical morbidity. There are interactions between birth weight, gestational age, sex, and survival rates.