Development of QSAR model for immunomodulatory activity of natural coumarinolignoids 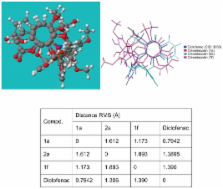 Immunomodulation is the process of alteration in immune response due to foreign intrusion of molecules inside the body. Along with the available drugs, a large number of herbal drugs are promoted in traditional Indian treatments, for their immunomodulating activity. Natural coumarinolignoids isolated from the seeds of Cleome viscose have been recognized as having hepatoprotective action and have recently been tested preclinically for their immunomodulatory activity affecting both cell-mediated and humoral immune response. To explore the immunomodulatory compound from derivatives of coumarinolignoids, a quantitative structure activity relationship (QSAR) and molecular docking studies were performed. Theoretical results are in accord with the in vivo experimental data studied on Swiss albino mice. Immunostimulatory activity was predicted through QSAR model, developed by forward feed multiple linear regression method with leave-one-out approach. Relationship correlating measure of QSAR model was 99% ( R 2 = 0.99) and predictive accuracy was 96% (RCV 2 = 0.96). QSAR studies indicate that dipole moment, steric energy, amide group count, lambda max (UV-visible), and molar refractivity correlates well with biological activity, while decrease in dipole moment, steric energy, and molar refractivity has negative correlation. Docking studies also showed strong binding affinity to immunomodulatory receptors.

A general and fast scoring function for protein-ligand interactions: a simplified potential approach.

Drew Weissman,  Katalin Karikó,  F Welsh (2004)
Cerebral ischemia triggers acute inflammation, which exacerbates primary brain damage. Activation of the innate immune system is an important component of this inflammatory response. Inflammation occurs through the action of proinflammatory cytokines, such as TNF, IL-1 beta and IL-6, that alter blood flow and increase vascular permeability, thus leading to secondary ischemia and accumulation of immune cells in the brain. Production of these cytokines is initiated by signaling through Toll-like receptors (TLRs) that recognize host-derived molecules released from injured tissues and cells. Recently, great strides have been made in understanding the regulation of the innate immune system, particularly the signaling mechanisms of TLRs. Negative feedback inhibitors of TLRs and inflammatory cytokines have now been identified and characterized. It is also evident that lipid rafts exist in membranes and play a role in receptor-mediated inflammatory signaling events. In the present review, using this newly available large body of knowledge, we take a fresh look at studies of ischemic tolerance. Based on this analysis, we recognize a striking similarity between ischemic tolerance and endotoxin tolerance, an immune suppressive state characterized by hyporesponsiveness to lipopolysaccharide (LPS). In view of this analogy, and considering recent discoveries related to molecular mechanisms of endotoxin tolerance, we postulate that inhibition of TLR and proinflammatory cytokine signaling contributes critically to ischemic tolerance in the brain and other organs. Ischemic tolerance is a protective mechanism induced by a variety of preconditioning stimuli. Tolerance can be established with two temporal profiles: (i) a rapid form in which the trigger induces tolerance to ischemia within minutes and (ii) a delayed form in which development of protection takes several hours or days and requires de-novo protein synthesis. The rapid form of tolerance is achieved by direct interference with membrane fluidity, causing disruption of lipid rafts leading to inhibition of TLR/cytokine signaling pathways. In the delayed form of tolerance, the preconditioning stimulus first triggers the TLR/cytokine inflammatory pathways, leading not only to inflammation but also to simultaneous upregulation of feedback inhibitors of inflammation. These inhibitors, which include signaling inhibitors, decoy receptors, and anti-inflammatory cytokines, reduce the inflammatory response to a subsequent episode of ischemia. This novel interpretation of the molecular mechanism of ischemic tolerance highlights new avenues for future investigation into the prevention and treatment of stroke and related diseases.

B M Fenton,  D Golenbock (1998)
Macrophage activation by gram-negative lipopolysaccharide (LPS) has been extensively studied in an attempt to define the mechanisms that underlie innate immunity against bacterial pathogens. Dysregulation of these same mechanisms contributes to the pathophysiological consequences of bacterial sepsis. The biological actions of LPS are mediated, at least in part, by both LPS-binding proteins and LPS receptors. Several LPS receptors (CD14, the macrophage scavenger receptor, and the beta2 integrins), as well as the serum LPS-binding protein LBP, have been cloned and studied in detail. In addition, insights gained through the use of LPS antagonists have led to a better understanding of a molecule believed to function in conjunction with LPS receptors to transduce signals from the membrane to the cytosol. More recently, the use of knockout mice has greatly expanded our knowledge of the biology of LPS receptors and binding proteins. This review will summarize various phenotypes of mice that lack genes encoding CD14, the scavenger receptor, and LBP. These knockout mice have revealed several unexpected features of LPS action in vivo. Together, these animal models may provide a means to develop and evaluate novel therapeutic approaches to the control of endotoxin shock.