Meta-analysis: the effects of smoking on the disposition of two commonly used antipsychotic agents, olanzapine and clozapine 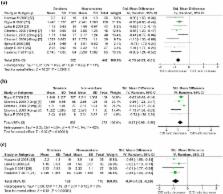 To clarify the effects of smoking on the disposition of two commonly used antipsychotics, olanzapine and clozapine, and to create standards to adjust the doses of these drugs in clinical practice based on the smoking status.

A meta-analysis was conducted by searching MEDLINE, Scopus and the Cochrane Library for relevant prospective and retrospective studies.

We included the studies that investigated the effects of smoking on the concentration to dose (C/D) ratio of olanzapine or clozapine.

The weighted mean difference was calculated using a DerSimonian-Laird random effects model, along with 95% CI.

We suggest that the doses of olanzapine and clozapine should be reduced by 30% and 50%, respectively, in non-smokers compared with smokers in order to obtain an equivalent olanzapine or clozapine concentration.

R. Ptak,  Anastasia Callaghan,  Federico C. Beasley … (1999)
Multicentre trials in patients with schizophrenia confirm that olanzapine is a novel antipsychotic agent with broad efficacy, eliciting a response in both the positive and negative symptoms of schizophrenia. Compared with traditional antipsychotic agents, olanzapine causes a lower incidence of extrapyramidal symptoms and minimal perturbation of prolactin levels. Generally, olanzapine is well tolerated. The pharmacokinetics of olanzapine are linear and dose-proportional within the approved dosage range. Its mean half-life in healthy individuals was 33 hours, ranging from 21 to 54 hours. The mean apparent plasma clearance was 26 L/h, ranging from 12 to 47 L/h. Smokers and men have a higher clearance of olanzapine than women and nonsmokers. After administering [14C]olanzapine, approximately 60% of the radioactivity was excreted in urine and 30% in faeces. Olanzapine is predominantly bound to albumin (90%) and alpha 1-acid glycoprotein (77%). Olanzapine is metabolised to its 10- and 4'-N-glucuronides, 4'-N-desmethylolanzapine [cytochrome P450 (CYP) 1A2] and olanzapine N-oxide (flavin mono-oxygenase 3). Metabolism to 2-hydroxymethylolanzapine via CYP2D6 is a minor pathway. The 10-N-glucuronide is the most abundant metabolite, but formation of 4'-N-desmethylolanzapine is correlated with the clearance of olanzapine. Olanzapine does not inhibit CYP isozymes. No clinically significant metabolic interactions were found between olanzapine and diazepam, alcohol (ethanol), imipramine, R/S-warfarin, aminophylline, biperiden, lithium or fluoxetine. Fluvoxamine, an inhibitor of CYP1A2, increases plasma concentrations of olanzapine; inducers of CYP1A2, including tobacco smoke and carbamazepine, decrease olanzapine concentrations. Orthostatic changes were observed when olanzapine and diazepam or alcohol were coadministered. Pharmacodynamic interactions occurred between olanzapine and alcohol, and olanzapine and imipramine, implying that patients should avoid operating hazardous equipment or driving an automobile while experiencing the short term effects of the combinations. Individual factors with the largest impact on olanzapine pharmacokinetics are gender and smoking status. The plasma clearance of olanzapine generally varies over a 4-fold range, but the variability in the clearance and concentration of olanzapine does not appear to be associated with the severity or duration of adverse effects or the degree of efficacy. Thus, dosage adjustments appear unnecessary for these individual factors. However, dosage modification should be considered for patients characterised by a combination of factors associated with decreased oxidative metabolism, for example, debilitated or elderly women who are nonsmokers.

Mike Chappell,  Richard Bergstrom,  M P Knadler … (2011)
Duloxetine, a potent reuptake inhibitor of serotonin (5-HT) and norepinephrine, is effective for the treatment of major depressive disorder, diabetic neuropathic pain, stress urinary incontinence, generalized anxiety disorder and fibromyalgia. Duloxetine achieves a maximum plasma concentration (C(max)) of approximately 47 ng/mL (40 mg twice-daily dosing) to 110 ng/mL (80 mg twice-daily dosing) approximately 6 hours after dosing. The elimination half-life of duloxetine is approximately 10-12 hours and the volume of distribution is approximately 1640 L. The goal of this paper is to provide a review of the literature on intrinsic and extrinsic factors that may impact the pharmacokinetics of duloxetine with a focus on concomitant medications and their clinical implications. Patient demographic characteristics found to influence the pharmacokinetics of duloxetine include sex, smoking status, age, ethnicity, cytochrome P450 (CYP) 2D6 genotype, hepatic function and renal function. Of these, only impaired hepatic function or severely impaired renal function warrant specific warnings or dose recommendations. Pharmacokinetic results from drug interaction studies show that activated charcoal decreases duloxetine exposure, and that CYP1A2 inhibition increases duloxetine exposure to a clinically significant degree. Specifically, following oral administration in the presence of fluvoxamine, the area under the plasma concentration-time curve and C(max) of duloxetine significantly increased by 460% (90% CI 359, 584) and 141% (90% CI 93, 200), respectively. In addition, smoking is associated with a 30% decrease in duloxetine concentration. The exposure of duloxetine with CYP2D6 inhibitors or in CYP2D6 poor metabolizers is increased to a lesser extent than that observed with CYP1A2 inhibition and does not require a dose adjustment. In addition, duloxetine increases the exposure of drugs that are metabolized by CYP2D6, but not CYP1A2. Pharmacodynamic study results indicate that duloxetine may enhance the effects of benzodiazepines, but not alcohol or warfarin. An increase in gastric pH produced by histamine H(2)-receptor antagonists or antacids did not impact the absorption of duloxetine. While duloxetine is generally well tolerated, it is important to be knowledgeable about the potential for pharmacokinetic interactions between duloxetine and drugs that inhibit CYP1A2 or drugs that are metabolized by CYP2D6 enzymes.