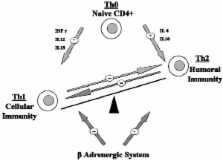 Sepsis, despite recent therapeutic progress, still carries unacceptably high mortality rates. The adrenergic system, a key modulator of organ function and cardiovascular homeostasis, could be an interesting new therapeutic target for septic shock. β-Adrenergic regulation of the immune function in sepsis is complex and is time dependent. However, β 2 activation as well as β 1 blockade seems to downregulate proinflammatory response by modulating the cytokine production profile. β 1 blockade improves cardiovascular homeostasis in septic animals, by lowering myocardial oxygen consumption without altering organ perfusion, and perhaps by restoring normal cardiovascular variability. β-Blockers could also be of interest in the systemic catabolic response to sepsis, as they oppose epinephrine which is known to promote hyperglycemia, lipid and protein catabolism. The role of β-blockers in coagulation is less clear cut. They could have a favorable role in the septic pro-coagulant state, as β 1 blockade may reduce platelet aggregation and normalize the depressed fibrinolytic status induced by adre-nergic stimulation. Therefore, β 1 blockade as well as β 2 activation improves sepsis-induced immune, cardiovascular and coagulation dysfunctions. β 2 blocking, however, seems beneficial in the metabolic field. Enough evidence has been accumulated in the literature to propose β- adrenergic modulation, β 1 blockade and β 2 activation in particular, as new promising therapeutic targets for septic dyshomeostasis, modulating favorably immune, cardiovascular, metabolic and coagulation systems.

American College of Chest Physicians/Society of Critical Care Medicine Consensus Conference: definitions for sepsis and organ failure and guidelines for the use of innovative therapies in sepsis.

(1992)
To define the terms "sepsis" and "organ failure" in a precise manner. Review of the medical literature and the use of expert testimony at a consensus conference. American College of Chest Physicians (ACCP) headquarters in Northbrook, IL. Leadership members of ACCP/Society of Critical Care Medicine (SCCM). An ACCP/SCCM Consensus Conference was held in August of 1991 with the goal of agreeing on a set of definitions that could be applied to patients with sepsis and its sequelae. New definitions were offered for some terms, while others were discarded. Broad definitions of sepsis and the systemic inflammatory response syndrome were proposed, along with detailed physiologic variables by which a patient could be categorized. Definitions for severe sepsis, septic shock, hypotension, and multiple organ dysfunction syndrome were also offered. The use of severity scoring methods were recommended when dealing with septic patients as an adjunctive tool to assess mortality. Appropriate methods and applications for the use and testing of new therapies were recommended. The use of these terms and techniques should assist clinicians and researchers who deal with sepsis and its sequelae.

The sympathetic nerve--an integrative interface between two supersystems: the brain and the immune system.

G A Chrousos,  I J Elenkov,  E. Sylvester Vizi … (2000)
The brain and the immune system are the two major adaptive systems of the body. During an immune response the brain and the immune system "talk to each other" and this process is essential for maintaining homeostasis. Two major pathway systems are involved in this cross-talk: the hypothalamic-pituitary-adrenal (HPA) axis and the sympathetic nervous system (SNS). This overview focuses on the role of SNS in neuroimmune interactions, an area that has received much less attention than the role of HPA axis. Evidence accumulated over the last 20 years suggests that norepinephrine (NE) fulfills the criteria for neurotransmitter/neuromodulator in lymphoid organs. Thus, primary and secondary lymphoid organs receive extensive sympathetic/noradrenergic innervation. Under stimulation, NE is released from the sympathetic nerve terminals in these organs, and the target immune cells express adrenoreceptors. Through stimulation of these receptors, locally released NE, or circulating catecholamines such as epinephrine, affect lymphocyte traffic, circulation, and proliferation, and modulate cytokine production and the functional activity of different lymphoid cells. Although there exists substantial sympathetic innervation in the bone marrow, and particularly in the thymus and mucosal tissues, our knowledge about the effect of the sympathetic neural input on hematopoiesis, thymocyte development, and mucosal immunity is extremely modest. In addition, recent evidence is discussed that NE and epinephrine, through stimulation of the beta(2)-adrenoreceptor-cAMP-protein kinase A pathway, inhibit the production of type 1/proinflammatory cytokines, such as interleukin (IL-12), tumor necrosis factor-alpha, and interferon-gamma by antigen-presenting cells and T helper (Th) 1 cells, whereas they stimulate the production of type 2/anti-inflammatory cytokines such as IL-10 and transforming growth factor-beta. Through this mechanism, systemically, endogenous catecholamines may cause a selective suppression of Th1 responses and cellular immunity, and a Th2 shift toward dominance of humoral immunity. On the other hand, in certain local responses, and under certain conditions, catecholamines may actually boost regional immune responses, through induction of IL-1, tumor necrosis factor-alpha, and primarily IL-8 production. Thus, the activation of SNS during an immune response might be aimed to localize the inflammatory response, through induction of neutrophil accumulation and stimulation of more specific humoral immune responses, although systemically it may suppress Th1 responses, and, thus protect the organism from the detrimental effects of proinflammatory cytokines and other products of activated macrophages. The above-mentioned immunomodulatory effects of catecholamines and the role of SNS are also discussed in the context of their clinical implication in certain infections, major injury and sepsis, autoimmunity, chronic pain and fatigue syndromes, and tumor growth. Finally, the pharmacological manipulation of the sympathetic-immune interface is reviewed with focus on new therapeutic strategies using selective alpha(2)- and beta(2)-adrenoreceptor agonists and antagonists and inhibitors of phosphodiesterase type IV in the treatment of experimental models of autoimmune diseases, fibromyalgia, and chronic fatigue syndrome.

Role of C5a in inflammatory responses.

C. Ward,  Sarah A P Ward,  Ren Guo (2004)
The complement system not only represents an effective innate immune mechanism of host defense to eradicate microbial pathogens, but it is also widely involved in many forms of acute and chronic inflammatory diseases including sepsis, acute lung injury, ischemia-reperfusion injury, and asthma, to give just a few examples. The complement-activated product, C5a, displays powerful biological activities that lead to inflammatory sequelae. C5a is a strong chemoattractant and is involved in the recruitment of inflammatory cells such as neutrophils, eosinophils, monocytes, and T lymphocytes, in activation of phagocytic cells and release of granule-based enzymes and generation of oxidants, all of which may contribute to innate immune functions or tissue damage. Accumulating data suggest that C5a provides a vital bridge between innate and adaptive immune functions, extending the roles of C5a in inflammation. Herein, we review human and animal data describing the cellular and molecular mechanisms of C5a in the development of inflammatory disorders, sepsis, acute lung injury, ischemia-reperfusion injury, and asthma.