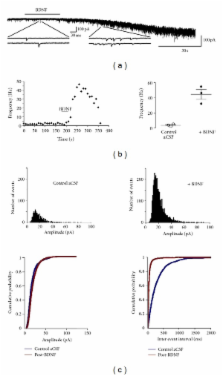 Brain-derived neurotrophic factor (BDNF) is well known as a survival factor during brain development as well as a regulator of adult synaptic plasticity. One potential mechanism to initiate BDNF actions is through its modulation of quantal presynaptic transmitter release. In response to local BDNF application to CA1 pyramidal neurons, the frequency of miniature excitatory postsynaptic currents (mEPSC) increased significantly within 30 seconds; mEPSC amplitude and kinetics were unchanged. This effect was mediated via TrkB receptor activation and required both full intracellular Ca 2+ stores as well as extracellular Ca 2+. Consistent with a role of Ca 2+-permeable plasma membrane channels of the TRPC family, the inhibitor SKF96365 prevented the BDNF-induced increase in mEPSC frequency. Furthermore, labeling presynaptic terminals with amphipathic styryl dyes and then monitoring their post-BDNF destaining in slice cultures by multiphoton excitation microscopy revealed that the increase in frequency of mEPSCs reflects vesicular fusion events. Indeed, BDNF application to CA3-CA1 synapses in TTX rapidly enhanced FM1-43 or FM2-10 destaining with a time course that paralleled the phase of increased mEPSC frequency. We conclude that BDNF increases mEPSC frequency by boosting vesicular fusion through a presynaptic, Ca 2+-dependent mechanism involving TrkB receptors, Ca 2+ stores, and TRPC channels.

A model for receptor-regulated calcium entry.

Leeann J Putney (1986)
A model is proposed for the mechanism by which activation of surface membrane receptors causes sustained Ca2+ entry into cells from the extracellular space. Reassessment of previously published findings on the behavior of receptor-regulated intracellular Ca2+ pools leads to the conclusion that when such pools are empty, a pathway from the extracellular space to the pool is opened; conversely when the pool is filled, the pathway is closed and it becomes relatively stable to depletion by low Ca2+ media or chelating agents. The biphasic nature of agonist-activated Ca2+-mobilization is thus seen as an initial emptying of the intracellular Ca2+ pool by inositol (1,4,5) trisphosphate, followed by rapid entry of Ca2+ into the pool and, in the continued presence of inositol (1,4,5) trisphosphate, into the cytosol. On withdrawal of agonist, inositol (1,4,5) trisphosphate is then rapidly degraded, the pathway from the pool to the cytosol is closed, and rapid entry from the outside continues until the Ca2+ content of the pool reaches a level that inactivates Ca2+ entry. This capacitative model allows for Ca2+ release and Ca2+ entry to be controlled by a single messenger, inositol (1,4,5) trisphosphate.

Definition of the readily releasable pool of vesicles at hippocampal synapses.

C Rosenmund,  Guus G. C. F. Stevens (1996)
A readily releasable pool of quanta, tentatively identified with docked synaptic vesicles, has been defined by analysis of the neurotransmitter release caused by application of hypertonic solutions. The goal of this work is to determine the relationship of this functionally defined readily releasable pool to the one drawn upon by action potential-evoked release. We find that hypertonic solutions do not act through changes in intracellular calcium. Since the release produced by action potentials and hypertonic solutions varies in parallel as the pool size is changed, we conclude that the same pool is shared by both mechanisms. This conclusion, taken together with other observations in the literature, means that the synaptic release probability depends on the size of the readily releasable pool.

H Thoenen (1995)
There is increasing evidence that neurotrophins (NTs) are involved in processes of neuronal plasticity besides their well-established actions in regulating the survival, differentiation, and maintenance of functions of specific populations of neurons. Nerve growth factor, brain-derived neurotrophic factor, NT-4/5, and corresponding antibodies dramatically modify the development of the visual cortex. Although the neuronal elements involved have not yet been identified, complementary studies of other systems have demonstrated that NT synthesis is rapidly regulated by neuronal activity and that NTs are released in an activity-dependent manner from neuronal dendrites. These data, together with the observation that NTs enhance transmitter release from neurons that express the corresponding signal-transducing Trk receptors, suggest a role for NTs as selective retrograde messengers that regulate synaptic efficacy.