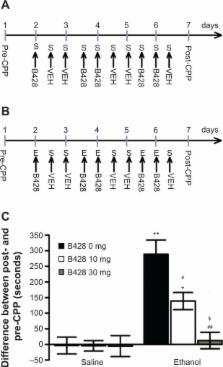 Urokinase plasminogen activator, uPA, is a serine protease implicated in addiction to drugs of abuse. Using its specific inhibitor, B428, we and others have characterized the role of uPA in the rewarding properties of psychostimulants, including cocaine and amphetamine, but none have examined the role of uPA in ethanol use disorders. Therefore, in the current study, we extended our observations to the role of uPA in ethanol consumption and ethanol-induced conditioned place preference. The general aim of the present series of experiments was to investigate the effects of the administration of the B428 on voluntary alcohol intake and ethanol conditioned reward. A two-bottle choice, unlimited-access paradigm was used to compare ethanol intake between vehicle- and 3, 10, and 30 mg/kg B428-administered mice. For this purpose, the mice were presented with an ethanol solution (2.5%–20%) and water, at each concentration for 4 days, and their consumption was measured daily. Consumption of saccharin and quinine solutions was also measured. Systemic administration of B428 dose-dependently decreased ethanol intake and preference. Additionally, B428 mice did not differ from vehicle mice in their intake of graded solutions of tastants, suggesting that the uPA inhibition did not alter taste function. Also, ethanol metabolism was not affected following B428 injection. More importantly, 1.5 g/kg ethanol-induced conditioned place preference acquisition was blocked following B428 administration. Taken together, our results are the first to implicate uPA inhibition in the regulation of ethanol consumption and preference, and suggest that uPA may be considered as a possible therapeutic drug target for alcoholism and abstinence.

Behavioural assessment of drug reinforcement and addictive features in rodents: an overview.

Rainer Spanagel,  Carles Sanchis-Segura,  carla Sanchis-Segura (2006)
Some psychoactive drugs are abused because of their ability to act as reinforcers. As a consequence behavioural patterns (such as drug-seeking/drug-taking behaviours) are promoted that ensure further drug consumption. After prolonged drug self-administration, some individuals lose control over their behaviour so that these drug-seeking/taking behaviours become compulsive, pervading almost all life activities and precipitating the loss of social compatibility. Thus, the syndrome of addictive behaviour is qualitatively different from controlled drug consumption. Drug-induced reinforcement can be assessed directly in laboratory animals by either operant or non-operant self-administration methods, by classical conditioning-based paradigms such as conditioned place preference or sign tracking, by facilitation of intracranial electric self-stimulation, or, alternatively by drug-induced memory enhancement. In contrast, addiction cannot be modelled in animals, at least as a whole, within the constraints of the laboratory. However, various procedures have been proposed as possible rodent analogues of addiction's major elements including compulsive drug seeking, relapse, loss of control/impulsivity, and continued drug consumption despite negative consequences. This review provides an extensive overview and a critical evaluation of the methods currently used for studying drug-induced reinforcement as well as specific features of addictive behaviour. In addition, comic strips that illustrate behavioural methods used in the drug abuse field are provided given for free download under http://www.zi-mannheim/psychopharmacology.de.

Breaking the loop: oxytocin as a potential treatment for drug addiction.

Iain McGregor,  Michael T Bowen (2012)
Drug use typically occurs within a social context, and social factors play an important role in the initiation, maintenance and recovery from addictions. There is now accumulating evidence of an interaction between the neural substrates of affiliative behavior and those of drug reward, with a role for brain oxytocin systems in modulating acute and long-term drug effects. Early research in this field indicated that exogenous oxytocin administration can prevent development of tolerance to ethanol and opiates, the induction of stereotyped, hyperactive behavior by stimulants, and the withdrawal symptoms associated with sudden abstinence from drugs and alcohol. Additionally, stimulation of endogenous oxytocin systems is a key neurochemical substrate underlying the prosocial and empathogenic effects of party drugs such as MDMA (Ecstasy) and GHB (Fantasy). Brain oxytocin systems exhibit profound neuroplasticity and undergo major neuroadaptations as a result of drug exposure. Many drugs, including cocaine, opiates, alcohol, cannabis, MDMA and GHB cause long-term changes in markers of oxytocin function and this may be linked to enduring deficits in social behavior that are commonly observed in laboratory animals repeatedly exposed to these drugs. Very recent preclinical studies have illustrated a remarkable ability of exogenously delivered oxytocin to inhibit stimulant and alcohol self-administration, to alter associated drug-induced changes in dopamine, glutamate and Fos expression in cortical and basal ganglia sites, and to prevent stress and priming-induced relapse to drug seeking. Oxytocin therefore has fascinating potential to reverse the corrosive effects of long-term drugs abuse on social behavior and to perhaps inoculate against future vulnerability to addictive disorders. The results of clinical studies examining intranasal oxytocin effects in humans with drug use disorders are eagerly awaited. This article is part of a Special Issue entitled Oxytocin, Vasopressin, and Social Behavior. Copyright © 2011 Elsevier Inc. All rights reserved.

The neurobiology of alcohol consumption and alcoholism: an integrative history.

Stephen L Hoffman,  Boris Tabakoff (2013)
Studies of the neurobiological predisposition to consume alcohol (ethanol) and to transition to uncontrolled drinking behavior (alcoholism), as well as studies of the effects of alcohol on brain function, started a logarithmic growth phase after the repeal of the 18th Amendment to the United States Constitution. Although the early studies were primitive by current technological standards, they clearly demonstrated the effects of alcohol on brain structure and function, and by the end of the 20th century left little doubt that alcoholism is a "disease" of the brain. This review traces the history of developments in the understanding of ethanol's effects on the most prominent inhibitory and excitatory systems of brain (GABA and glutamate neurotransmission). This neurobiological information is integrated with knowledge of ethanol's actions on other neurotransmitter systems to produce an anatomical and functional map of ethanol's properties. Our intent is limited in scope, but is meant to provide context and integration of the actions of ethanol on the major neurobiologic systems which produce reinforcement for alcohol consumption and changes in brain chemistry that lead to addiction. The developmental history of neurobehavioral theories of the transition from alcohol drinking to alcohol addiction is presented and juxtaposed to the neurobiological findings. Depending on one's point of view, we may, at this point in history, know more, or less, than we think we know about the neurobiology of alcoholism. © 2013.