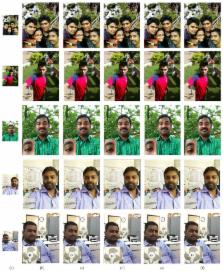 A selfie is typically a self-portrait captured using the front camera of a smartphone. Most state-of-the-art smartphones are equipped with a high-resolution (HR) rear camera and a low-resolution (LR) front camera. As selfies are captured by front camera with limited pixel resolution, the fine details in it are explicitly missed. This paper aims to improve the resolution of selfies by exploiting the fine details in HR images captured by rear camera using an example-based super-resolution (SR) algorithm. HR images captured by rear camera carry significant fine details and are used as an exemplar to train an optimal matrix-value regression (MVR) operator. The MVR operator serves as an image-pair priori which learns the correspondence between the LR-HR patch-pairs and is effectively used to super-resolve LR selfie images. The proposed MVR algorithm avoids vectorization of image patch-pairs and preserves image-level information during both learning and recovering process. The proposed algorithm is evaluated for its efficiency and effectiveness both qualitatively and quantitatively with other state-of-the-art SR algorithms. The results validate that the proposed algorithm is efficient as it requires less than 3 seconds to super-resolve LR selfie and is effective as it preserves sharp details without introducing any counterfeit fine details.