Neonatal outcomes in relation to sex differences: a national cohort survey in Taiwan 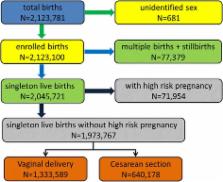 An extensive assessment investigating the association between sex differences and neonatal outcomes is lacking. In the current study, we estimated the correlation of gender with adverse birth outcomes in a large cohort population.

National population-based data containing maternal and neonatal information in 2001 to 2010 were derived from the Health Promotion Administration, Taiwan. Singletons without high-risk pregnancy were further analyzed for the sex ratio of live births in relation to neonatal outcomes—including preterm birth, birth weight, neonatal death, delivery mode, and congenital anomaly. A multivariate logistic regression model was used to adjust for possible confounders.

In total, 2,123,100 births were valid for the analysis. Overall, the sex ratio at birth (male/female) was 1.096. Compared to multiple births, the sex ratio was significantly higher with singleton births ( p < 0.001). Among multiple births, the incidence of stillbirths was significantly higher in males than in females ( p < 0.05). The sex ratio at gestational age (GA) <37 weeks was 1.332, and it declined proportionally with a rise in the GA to 0.899 at GA of ≥41 weeks. In contrast, the sex ratio was 0.850 at birth weight <3000 g, and it rose proportionally with a rise in the birth weight to 1.902 at birth weight ≥4000 g (macrosomia). Operative delivery was more common in males than in females ( p < 0.001). The regression analysis showed greater risks of preterm birth, macrosomia, operative delivery, neonatal death, and congenital anomaly among male newborns.

Hannah Glass,  Andrew Costarino,  Stephen A Stayer … (2015)
Premature birth is a significant cause of infant and child morbidity and mortality. In the United States, the premature birth rate, which had steadily increased during the 1990s and early 2000s, has decreased annually for 7 years and is now approximately 11.39%. Human viability, defined as gestational age at which the chance of survival is 50%, is currently approximately 23 to 24 weeks in developed countries. Infant girls, on average, have better outcomes than infant boys. A relatively uncomplicated course in the intensive care nursery for an extremely premature infant results in a discharge date close to the prenatal estimated date of confinement. Despite technological advances and efforts of child health experts during the last generation, the extremely premature infant (less than 28 weeks gestation) and extremely low birth weight infant (<1000 g) remain at high risk for death and disability with 30% to 50% mortality and, in survivors, at least 20% to 50% risk of morbidity. The introduction of continuous positive airway pressure, mechanical ventilation, and exogenous surfactant increased survival and spurred the development of neonatal intensive care in the 1970s through the early 1990s. Routine administration of antenatal steroids during premature labor improved neonatal mortality and morbidity in the late 1990s. The recognition that chronic postnatal administration of steroids to infants should be avoided may have improved outcomes in the early 2000s. Evidence from recent trials attempting to define the appropriate target for oxygen saturation in preterm infants suggests arterial oxygen saturation between 91% and 95% (compared with 85%-89%) avoids excess mortality; however, final analyses of data from these trials have not been published, so definitive recommendations are still pending. The development of neonatal neurocritical intensive care units may improve neurocognitive outcomes in this high-risk group. Long-term follow-up to detect and address developmental, learning, behavioral, and social problems is critical for children born at these early gestational ages.The striking similarities in response to extreme prematurity in the lung and brain imply that agents and techniques that benefit one organ are likely to also benefit the other. Finally, because therapy and supportive care continue to change, the outcomes of extremely low birth weight infants are ever evolving. Efforts to minimize injury, preserve growth, and identify interventions focused on antioxidant and anti-inflammatory pathways are now being evaluated. Thus, treating and preventing long-term deficits must be developed in the context of a "moving target."

Therese Hesketh,  Z. Xing (2006)
In the absence of manipulation, both the sex ratio at birth and the population sex ratio are remarkably constant in human populations. Small alterations do occur naturally; for example, a small excess of male births has been reported to occur during and after war. The tradition of son preference, however, has distorted these natural sex ratios in large parts of Asia and North Africa. This son preference is manifest in sex-selective abortion and in discrimination in care practices for girls, both of which lead to higher female mortality. Differential gender mortality has been a documented problem for decades and led to reports in the early 1990s of 100 million "missing women" across the developing world. Since that time, improved health care and conditions for women have resulted in reductions in female mortality, but these advances have now been offset by a huge increase in the use of sex-selective abortion, which became available in the mid-1980s. Largely as a result of this practice, there are now an estimated 80 million missing females in India and China alone. The large cohorts of "surplus" males now reaching adulthood are predominantly of low socioeconomic class, and concerns have been expressed that their lack of marriageability, and consequent marginalization in society, may lead to antisocial behavior and violence, threatening societal stability and security. Measures to reduce sex selection must include strict enforcement of existing legislation, the ensuring of equal rights for women, and public awareness campaigns about the dangers of gender imbalance.

Determinants of neonatal mortality in Indonesia

Christiana R Titaley,  Michael Dibley,  Kingsley Agho … (2008)
Background Neonatal mortality accounts for almost 40 per cent of under-five child mortality, globally. An understanding of the factors related to neonatal mortality is important to guide the development of focused and evidence-based health interventions to prevent neonatal deaths. This study aimed to identify the determinants of neonatal mortality in Indonesia, for a nationally representative sample of births from 1997 to 2002. Methods The data source for the analysis was the 2002–2003 Indonesia Demographic and Health Survey from which survival information of 15,952 singleton live-born infants born between 1997 and 2002 was examined. Multilevel logistic regression using a hierarchical approach was performed to analyze the factors associated with neonatal deaths, using community, socio-economic status and proximate determinants. Results At the community level, the odds of neonatal death was significantly higher for infants from East Java (OR = 5.01, p = 0.00), and for North, Central and Southeast Sulawesi and Gorontalo combined (OR = 3.17, p = 0.03) compared to the lowest neonatal mortality regions of Bali, South Sulawesi and Jambi provinces. A progressive reduction in the odds was found as the percentage of deliveries assisted by trained delivery attendants in the cluster increased. The odds of neonatal death were higher for infants born to both mother and father who were employed (OR = 1.84, p = 0.00) and for infants born to father who were unemployed (OR = 2.99, p = 0.02). The odds were also higher for higher rank infants with a short birth interval (OR = 2.82, p = 0.00), male infants (OR = 1.49, p = 0.01), smaller than average-sized infants (OR = 2.80, p = 0.00), and infant's whose mother had a history of delivery complications (OR = 1.81, p = 0.00). Infants receiving any postnatal care were significantly protected from neonatal death (OR = 0.63, p = 0.03). Conclusion Public health interventions directed at reducing neonatal death should address community, household and individual level factors which significantly influence neonatal mortality in Indonesia. Low birth weight and short birth interval infants as well as perinatal health services factors, such as the availability of skilled birth attendance and postnatal care utilization should be taken into account when planning the interventions to reduce neonatal mortality in Indonesia.