Hemoglobin and mortality in patients with COPD: a nationwide population-based cohort study 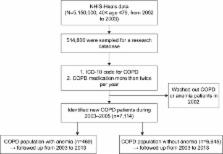 Anemia was associated with increased long-term mortality of COPD, and even mild anemia was related to a significantly increased risk.

The new BMI criteria for asians by the regional office for the western pacific region of WHO are suitable for screening of overweight to prevent metabolic syndrome in elder Japanese workers.

Akiko Nogi,  K. Kitajima,  Y Yamane … (2003)
Obesity occurs less frequently in Japanese than in various other ethnic populations. A person with abnormal glucose tolerance is often found to have one or more of the other cardiovascular disease risk factors, such as obesity, hypertension and hyperlipidemia. This clustering has been labeled as metabolic syndrome (WHO, 1998). It was suggested that Japanese, categorized as having normal weight (BMI of less than 25.0), as defined by the WHO (2000), have an increasing tendency toward metabolic syndrome. Our objective was to analyze metabolic syndrome in "Overweight" with BMI of 23.0-24.9 in Japanese workers, and to assess the suitability for Asians of the Regional Office for the Western Pacific Region of WHO criteria pertaining to obesity (WPRO criteria, 2000). We conducted a cross-sectional study in the workplace setting and investigated the relationship between BMI classification based on WPRO criteria and metabolic syndrome by gender and age group (18-44 yr vs. 45-60 yr). Three hundred seventy-nine men and 432 women Japanese workers participated in this study. BMI were categorized as 20% "Overweight" (23.0-24.9 BMI), 20% "Obese I" (25.0-29.9 BMI) and 2% "Obese II" (over 30.0 BMI), based on WPRO criteria. Graded increases in BMI were positively associated with body fat percentage, waist circumference, hip circumference and waist/hip ratio in both genders and age groups. A progressively increasing BMI category in the elder group aged 45-60 yr in both genders was positively related with parameters constituting metabolic syndrome. Graded increases in BMI classes in elder workers based on WPRO criteria were positively associated with prevalence of metabolic syndrome, and "Overweight" elder women had significantly higher prevalence of metabolic syndrome. The present investigation, based on the increasing risks of "Overweight" with a BMI of 23.0-24.9, suggests that WPRO criteria are suitable for Japanese workers aged over 45 yr.

Medical utilization and cost in patients with overlap syndrome of chronic obstructive pulmonary disease and asthma.

E. Berry,  Robert Wise (2010)
Chronic obstructive pulmonary disease (COPD) is a leading and increasing cause of death, the extent of which is underestimated as a consequence of underdiagnosis and underreporting on death certificates. Data from large trials, such as the Lung Health Study, Towards a Revolution in COPD Health (TORCH), Understanding Potential Long-term Impacts on Function with Tiotropium (UPLIFT), European Respiratory Society Study on Chronic Obstructive Pulmonary Disease (EUROSCOP), and Inhaled Steroids in Obstructive Lung Disease (ISOLDE), have shown that the causes of death in patients with mild COPD are predominantly cancer and cardiovascular disease, but as COPD severity increases, deaths due to non-malignant respiratory disease are increasingly common. In practice, mortality of patients with COPD can be predicted by a variety of measures including: forced expiratory volume in one second (FEV(1)), the ratio of inspiratory and total lung capacities, exercise capacity, dyspnea scores, and composite indices such as the body-mass index (B), degree of airflow obstruction (O), degree of functional dyspnea (D), and exercise capacity (E) (BODE) index. Smoking cessation improves survival in COPD patients, and in select patients with advanced disease, oxygen therapy, lung volume reduction surgery, or lung transplantation may also improve survival.