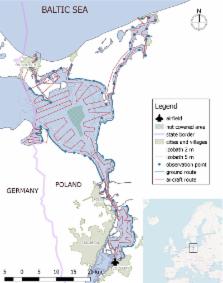 The aerial and ground methods of counting birds in a coastal area during different ice conditions were compared. Ice coverage of water was an important factor affecting the results of the two methods. When the water was ice-free, more birds were counted from the ground, whereas during ice conditions, higher numbers were obtained from the air. The first group of waterbirds with the smallest difference between the two methods (average 6%) contained seven species: Mute Swan Cygnus olor, Whooper Swan Cygnus cygnus, Greater Scaup Aythya marila, Tufted Duck Aythya fuligula, Common Goldeneye Bucephala clangula, Smew Mergellus albellus and Goosander Mergus merganser; these were treated as the core group. The second group with a moderate difference (average 20%) included another six species: Mallard Anas platyrhynchos, Eurasian Wigeon Mareca penelope, Common Pochard Aythya ferina, Great Crested Grebe Podiceps cristatus and Eurasian Coot Fulica atra. The third group with a large difference (average 85%) included five species, all of the Anatini tribe: Gadwall Mareca strepera, Northern Pintail Anas acuta, Northern Shoveler Spatula clypeata, Eurasian Teal Anas crecca and Garganey Spatula querquedula. During ice conditions, smaller numbers of most species were counted from the ground. The exception here was Mallard, more of which were counted from the ground, but the difference between two methods was relatively small in this species (7.5%). Under ice-free conditions, both methods can be used interchangeably for the most numerous birds occupying open water (core group) without any significant impact on the results. When water areas are frozen over, air counts are preferable as the results are more reliable. The cost analysis shows that a survey carried out by volunteer observers (reimbursement of travel expenses only) from the land is 58% cheaper, but if the observers are paid, then an aerial survey is 40% more economical.

Visibility Bias in Aerial Surveys: A Review of Estimation Procedures

Menno Hornman,  Tom Langendoen,  Irena Tománková … (2013)
Climate change is predicted to cause changes in species distributions and several studies report margin range shifts in some species. However, the reported changes rarely concern a species' entire distribution and are not always linked to climate change. Here, we demonstrate strong north-eastwards shifts in the centres of gravity of the entire wintering range of three common waterbird species along the North-West Europe flyway during the past three decades. These shifts correlate with an increase of 3.8 °C in early winter temperature in the north-eastern part of the wintering areas, where bird abundance increased exponentially, corresponding with decreases in abundance at the south-western margin of the wintering ranges. This confirms the need to re-evaluate conservation site safeguard networks and associated biodiversity monitoring along the flyway, as new important wintering areas are established further north and east, and highlights the general urgency of conservation planning in a changing world. Range shifts in wintering waterbirds may also affect hunting pressure, which may alter bag sizes and lead to population-level consequences. © 2013 Blackwell Publishing Ltd.