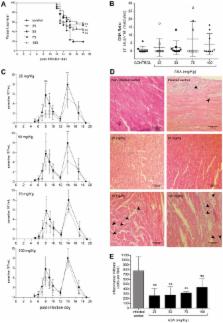 Chagas' disease, produced by Trypanosoma cruzi, affects more than 8 million people, producing approximately 10,000 deaths each year in Latin America. Migration of people from endemic regions to developed countries has expanded the risk of infection, transforming this disease into a globally emerging problem. PGE 2 and other eicosanoids contribute to cardiac functional deficits after infection with T. cruzi. Thus, the inhibition of host cyclooxygenase (COX) enzyme emerges as a potential therapeutic target. In vivo studies about the effect of acetylsalicylic acid (ASA) upon T. cruzi infection are controversial, and always report the effect of ASA at a single dose. Therefore, we aimed to analyze the effect of ASA at different doses in an in vivo model of infection and correlate it with the production of arachidonic acid metabolites. ASA decreased mortality, parasitemia, and heart damage in T. cruzi (Dm28c) infected mice, at the low doses of 25 and 50 mg/Kg. However, this effect disappeared when the high ASA doses of 75 and 100 mg/Kg were used. We explored whether this observation was related to the metabolic shift toward the production of 5-lipoxygenase derivatives, and although we did not observe an increase in LTB 4 production in infected RAW cells and mice infected, we did find an increase in 15-epi-LXA 4 (an ASA-triggered lipoxin). We also found high levels of 15-epi-LXA 4 in T. cruzi infected mice treated with the low doses of ASA, while the high ASA doses decreased 15-epi-LXA 4 levels. Importantly, 15-epi-LXA 4 prevented parasitemia, mortality, and cardiac changes in vivo and restored the protective role in the treatment with a high dose of ASA. This is the first report showing the production of ASA-triggered lipoxins in T. cruzi infected mice, which demonstrates the role of this lipid as an anti-inflammatory molecule in the acute phase of the disease.

Chagas' disease is an infection produced by the parasite Trypanosoma cruzi. This pathology is endemic in Latin America and has become a public health issue in some non-endemic countries like the USA, Spain and Australia. There is no curative treatment against Chagas' disease. NSAIDs, like aspirin, have been assayed as drugs with therapeutic potential in Chagas' disease, but the studies about this issue show contradictory results; also, the mechanism involved in aspirin effect is not yet clear. In this study, we explore a broad range of doses the protective role of aspirin. We found that aspirin has a therapeutic effect at low doses, an effect that disappears when doses are increased. This phenomenon correlates with the presence of 15-epi-LXA 4, a molecule known as an “aspirin-triggered lipoxin,” which increases at low doses of aspirin, and decreases when aspirin dose is increased. 15-epi-LXA 4 has been related with the anti-inflammatory effect of aspirin; in this setting, we found that 15-epi-LXA 4 is able to decrease the cardiac inflammation and others parameters related with Chagas' disease. Finally, we present the first study that shows that the protective effect of aspirin on Chagas' disease could be mediated by the synthesis of 15-epi-LXA 4.

Innes Wan,  O Kooi Li,  Anna-Karin Robertson … (2005)
Transforming growth factor-beta (TGF-beta) is a potent regulatory cytokine with diverse effects on hemopoietic cells. The pivotal function of TGF-beta in the immune system is to maintain tolerance via the regulation of lymphocyte proliferation, differentiation, and survival. In addition, TGF-beta controls the initiation and resolution of inflammatory responses through the regulation of chemotaxis, activation, and survival of lymphocytes, natural killer cells, dendritic cells, macrophages, mast cells, and granulocytes. The regulatory activity of TGF-beta is modulated by the cell differentiation state and by the presence of inflammatory cytokines and costimulatory molecules. Collectively, TGF-beta inhibits the development of immunopathology to self or nonharmful antigens without compromising immune responses to pathogens. This review highlights the findings that have advanced our understanding of TGF-beta in the immune system and in disease.

Uptake of apoptotic cells drives the growth of a pathogenic trypanosome in macrophages.

C Errando Smet,  Marcelo T. Bozza,  H Castro-Rueda … (2000)
After apoptosis, phagocytes prevent inflammation and tissue damage by the uptake and removal of dead cells. In addition, apoptotic cells evoke an anti-inflammatory response through macrophages. We have previously shown that there is intense lymphocyte apoptosis in an experimental model of Chagas' disease, a debilitating cardiac illness caused by the protozoan Trypanosoma cruzi. Here we show that the interaction of apoptotic, but not necrotic T lymphocytes with macrophages infected with T. cruzi fuels parasite growth in a manner dependent on prostaglandins, transforming growth factor-beta (TGF-beta) and polyamine biosynthesis. We show that the vitronectin receptor is critical, in both apoptotic-cell cytoadherence and the induction of prostaglandin E2/TGF-beta release and ornithine decarboxylase activity in macrophages. A single injection of apoptotic cells in infected mice increases parasitaemia, whereas treatment with cyclooxygenase inhibitors almost completely ablates it in vivo. These results suggest that continual lymphocyte apoptosis and phagocytosis of apoptotic cells by macrophages have a role in parasite persistence in the host, and that cyclooxygenase inhibitors have potential therapeutic application in the control of parasite replication and spread in Chagas' disease.

Chagas Disease: “The New HIV/AIDS of the Americas”