pROC: an open-source package for R and S+ to analyze and compare ROC curves 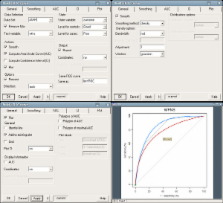 Receiver operating characteristic (ROC) curves are useful tools to evaluate classifiers in biomedical and bioinformatics applications. However, conclusions are often reached through inconsistent use or insufficient statistical analysis. To support researchers in their ROC curves analysis we developed pROC, a package for R and S+ that contains a set of tools displaying, analyzing, smoothing and comparing ROC curves in a user-friendly, object-oriented and flexible interface.

With data previously imported into the R or S+ environment, the pROC package builds ROC curves and includes functions for computing confidence intervals, statistical tests for comparing total or partial area under the curve or the operating points of different classifiers, and methods for smoothing ROC curves. Intermediary and final results are visualised in user-friendly interfaces. A case study based on published clinical and biomarker data shows how to perform a typical ROC analysis with pROC.

pROC is a package for R and S+ specifically dedicated to ROC analysis. It proposes multiple statistical tests to compare ROC curves, and in particular partial areas under the curve, allowing proper ROC interpretation. pROC is available in two versions: in the R programming language or with a graphical user interface in the S+ statistical software. It is accessible at http://expasy.org/tools/pROC/ under the GNU General Public License. It is also distributed through the CRAN and CSAN public repositories, facilitating its installation.

Mahlon DeLong,  Rebecca M. Pearson,  Jordan E. DeLong … (1988)
Methods of evaluating and comparing the performance of diagnostic tests are of increasing importance as new tests are developed and marketed. When a test is based on an observed variable that lies on a continuous or graded scale, an assessment of the overall value of the test can be made through the use of a receiver operating characteristic (ROC) curve. The curve is constructed by varying the cutpoint used to determine which values of the observed variable will be considered abnormal and then plotting the resulting sensitivities against the corresponding false positive rates. When two or more empirical curves are constructed based on tests performed on the same individuals, statistical analysis on differences between curves must take into account the correlated nature of the data. This paper presents a nonparametric approach to the analysis of areas under correlated ROC curves, by using the theory on generalized U-statistics to generate an estimated covariance matrix.

An introduction to ROC analysis

A method of comparing the areas under receiver operating characteristic curves derived from the same cases.

Matthew McNeil,  A. J. Hanley,  Marnix van Holsbeeck (1983)
Receiver operating characteristic (ROC) curves are used to describe and compare the performance of diagnostic technology and diagnostic algorithms. This paper refines the statistical comparison of the areas under two ROC curves derived from the same set of patients by taking into account the correlation between the areas that is induced by the paired nature of the data. The correspondence between the area under an ROC curve and the Wilcoxon statistic is used and underlying Gaussian distributions (binormal) are assumed to provide a table that converts the observed correlations in paired ratings of images into a correlation between the two ROC areas. This between-area correlation can be used to reduce the standard error (uncertainty) about the observed difference in areas. This correction for pairing, analogous to that used in the paired t-test, can produce a considerable increase in the statistical sensitivity (power) of the comparison. For studies involving multiple readers, this method provides a measure of a component of the sampling variation that is otherwise difficult to obtain.