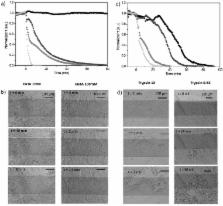 Claudins and the modulation of tight junction permeability.

Dorothee Günzel,  Alan Yu (2013)
Claudins are tight junction membrane proteins that are expressed in epithelia and endothelia and form paracellular barriers and pores that determine tight junction permeability. This review summarizes our current knowledge of this large protein family and discusses recent advances in our understanding of their structure and physiological functions.

Masahiko Itoh,  Mikio Furuse,  Kazumasa Morita … (1999)
ZO-1, ZO-2, and ZO-3, which contain three PDZ domains (PDZ1 to -3), are concentrated at tight junctions (TJs) in epithelial cells. TJ strands are mainly composed of two distinct types of four-transmembrane proteins, occludin, and claudins, between which occludin was reported to directly bind to ZO-1/ZO-2/ZO-3. However, in occludin-deficient intestinal epithelial cells, ZO-1/ZO-2/ZO-3 were still recruited to TJs. We then examined the possible interactions between ZO-1/ZO-2/ZO-3 and claudins. ZO-1, ZO-2, and ZO-3 bound to the COOH-terminal YV sequence of claudin-1 to -8 through their PDZ1 domains in vitro. Then, claudin-1 or -2 was transfected into L fibroblasts, which express ZO-1 but not ZO-2 or ZO-3. Claudin-1 and -2 were concentrated at cell–cell borders in an elaborate network pattern, to which endogenous ZO-1 was recruited. When ZO-2 or ZO-3 were further transfected, both were recruited to the claudin-based networks together with endogenous ZO-1. Detailed analyses showed that ZO-2 and ZO-3 are recruited to the claudin-based networks through PDZ2 (ZO-2 or ZO-3)/PDZ2 (endogenous ZO-1) and PDZ1 (ZO-2 or ZO-3)/COOH-terminal YV (claudins) interactions. In good agreement, PDZ1 and PDZ2 domains of ZO-1/ZO-2/ZO-3 were also recruited to claudin-based TJs, when introduced into cultured epithelial cells. The possible molecular architecture of TJ plaque structures is discussed.

The copyright line for this article was changed on 27 Jan 2015 after original online publication.