Effects of glutamine alone or in combination with zinc and vitamin A on growth, intestinal barrier function, stress and satiety-related hormones in Brazilian shantytown children 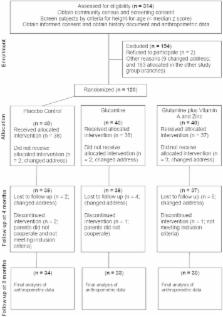 To determine the impact of supplemental zinc, vitamin A, and glutamine alone or in combination on growth, intestinal barrier function, stress and satiety-related hormones among Brazilian shantytown children with low median height-for-age z-scores.

A randomized, double-blind, placebo-controlled trial was conducted in children aged two months to nine years from the urban shanty compound community of Fortaleza, Brazil. Demographic and anthropometric information was assessed. The random treatment groups available for testing (a total of 120 children) were as follows: (1) glutamine alone, n = 38; (2) glutamine plus vitamin A plus zinc, n = 37; and a placebo (zinc plus vitamin A vehicle) plus glycine (isonitrogenous to glutamine) control treatment, n = 38. Leptin, adiponectin, insulin-like growth factor (IGF-1), and plasma levels of cortisol were measured with immune-enzymatic assays; urinary lactulose/mannitol and serum amino acids were measured with high-performance liquid chromatography. ClinicalTrials.gov: NCT00133406.

Glutamine treatment significantly improved weight-for-height z-scores compared to the placebo-glycine control treatment. Either glutamine alone or all nutrients combined prevented disruption of the intestinal barrier function, as measured by the percentage of lactulose urinary excretion and the lactulose:mannitol absorption ratio. Plasma leptin was negatively correlated with plasma glutamine ( p = 0.002) and arginine ( p = 0.001) levels at baseline. After glutamine treatment, leptin was correlated with weight-for-age (WAZ) and weight-for-height z-scores (WHZ) ( p≤0.002) at a 4-month follow-up. In addition, glutamine and all combined nutrients (glutamine, vitamin A, and zinc) improved the intestinal barrier function in these children.

Taken together, these findings reveal the benefits of glutamine alone or in combination with other gut-trophic nutrients in growing children via interactions with leptin.

Anita R. Howard,  G. M. Lord,  Arnold Bloom … (1998)
Nutritional deprivation suppresses immune function. The cloning of the obese gene and identification of its protein product leptin has provided fundamental insight into the hypothalamic regulation of body weight. Circulating levels of this adipocyte-derived hormone are proportional to fat mass but maybe lowered rapidly by fasting or increased by inflammatory mediators. The impaired T-cell immunity of mice now known to be defective in leptin (ob/ob) or its receptor (db/db), has never been explained. Impaired cell-mediated immunity and reduced levels of leptin are both features of low body weight in humans. Indeed, malnutrition predisposes to death from infectious diseases. We report here that leptin has a specific effect on T-lymphocyte responses, differentially regulating the proliferation of naive and memory T cells. Leptin increased Th1 and suppressed Th2 cytokine production. Administration of leptin to mice reversed the immunosuppressive effects of acute starvation. Our findings suggest a new role for leptin in linking nutritional status to cognate cellular immune function, and provide a molecular mechanism to account for the immune dysfunction observed in starvation.

Adiponectin, a new member of the family of soluble defense collagens, negatively regulates the growth of myelomonocytic progenitors and the functions of macrophages.

Andrea J Tenner,  Tadashi Funahashi,  Patricia A Tenner … (2000)
We investigated the functions of adiponectin, an adipocyte-specific secretory protein and a new member of the family of soluble defense collagens, in hematopoiesis and immune responses. Adiponectin suppressed colony formation from colony-forming units (CFU)-granulocyte-macrophage, CFU-macrophage, and CFU-granulocyte, whereas it had no effect on that of burst-forming units-erythroid or mixed erythroid-myeloid CFU. In addition, adiponectin inhibited proliferation of 4 of 9 myeloid cell lines but did not suppress proliferation of erythroid or lymphoid cell lines except for one cell line. These results suggest that adiponectin predominantly inhibits proliferation of myelomonocytic lineage cells. At least one mechanism of the growth inhibition is induction of apoptosis because treatment of acute myelomonocytic leukemia lines with adiponectin induced the appearance of subdiploid peaks and oligonucleosomal DNA fragmentation. Aside from inhibiting growth of myelomonocytic progenitors, adiponectin suppressed mature macrophage functions. Treatment of cultured macrophages with adiponectin significantly inhibited their phagocytic activity and their lipopolysaccharide-induced production of tumor necrosis factor alpha. Suppression of phagocytosis by adiponectin is mediated by one of the complement C1q receptors, C1qRp, because this function was completely abrogated by the addition of an anti-C1qRp monoclonal antibody. These observations suggest that adiponectin is an important negative regulator in hematopoiesis and immune systems and raise the possibility that it may be involved in ending inflammatory responses through its inhibitory functions. (Blood. 2000;96:1723-1732)

Malnutrition as an enteric infectious disease with long-term effects on child development.

Giovanna Lima,  R. Moore,  Richard Guerrant … (2008)
Malnutrition is a major contributor to mortality and is increasingly recognized as a cause of potentially lifelong functional disability. Yet, a rate-limiting step in achieving normal nutrition may be impaired absorptive function due to multiple repeated enteric infections. This is especially problematic in children whose diets are marginal. In malnourished individuals, the infections are even more devastating. This review documents the evidence that intestinal infections lead to malnutrition and that malnutrition worsens intestinal infections. The clinical data presented here derive largely from long-term cohort studies that are supported by controlled animal studies. Also reviewed are the mechanisms by which enteric infections lead to undernutrition and by which malnutrition worsens enteric infections, with implications for potential novel interventions. Further intervention studies are needed to document the relevance of these mechanisms and, most importantly, to interrupt the vicious diarrhea-malnutrition cycle so children may develop their full potential.

All authors contributed significantly to the research and have read the manuscript, which has not been published and is not under consideration for publication elsewhere.