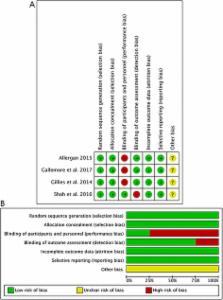 The PubMed, Embase, clinicaltrials.gov website and Cochrane Library databases were comprehensively searched for studies comparing DEX implant with anti-VEGF in patients with DME. Best-corrected visual acuity (BCVA), central subfield thickness (CST) and adverse events were extracted from the final eligible studies. Review Manager (RevMan) 5.3 for Mac was used to analyze the data and GRADE profiler were used to access the quality of outcomes.

Based on four randomized clinical trials assessing a total of 521 eyes, the DEX implant can achieve visual acuity improvement for DME at rates similar to those achieved via anti-VEGF treatment (mean difference [MD] = − 0.43, P = 0.35), with superior anatomic outcomes at 6 months (MD = − 86.71 μm, P = 0.02), while requiring fewer injections, in comparison to anti-VEGF treatment. Although the mean reduction in CST did not showed significant difference at 12 months (MD = − 33.77 μm, P = 0.21), the significant in BCVA from baseline to 12 months supported the anti-VEGF treatment (MD = − 3.26, P < 0.00001). No statistically significant differences in terms of the serious adverse events. However, use of the DEX implant has higher risk of intraocular pressure elevation and cataract than anti-VEGF treatment.

Compared with anti-VEGF, DEX implant improved anatomical outcomes significantly. However, this did not translate to improved visual acuity, which may be due to the progression of cataract. Therefore, the DEX implant may be recommended as a first chioce for select cases, such as for pseudophakic eyes, anti-VEGF-resistant eyes, or patients reluctant to receive intravitreal injections frequently.

Pharmacokinetics and pharmacodynamics of a sustained-release dexamethasone intravitreal implant.

Mayssa Attar,  Joan Chang,  Derrick R. Robinson … (2010)
To determine the pharmacokinetics and pharmacodynamics of a sustained-release dexamethasone (DEX) intravitreal implant (Ozurdex; Allergan, Inc.). Thirty-four male monkeys (Macaca fascicularis) received bilateral 0.7-mg DEX implants. Blood, vitreous humor, and retina samples were collected at predetermined intervals up to 270 days after administration. DEX was quantified by liquid chromatography-tandem mass spectrometry, and cytochrome P450 3A8 (CYP3A8) gene expression was analyzed by real-time reverse transcription-polymerase chain reaction. DEX was detected in the retina and vitreous humor for 6 months, with peak concentrations during the first 2 months. After 6 months, DEX was below the limit of quantitation. The C(max) (T(max)) and AUC for the retina were 1110 ng/g (day 60) and 47,200 ng · d/g, and for the vitreous humor were 213 ng/mL (day 60) and 11,300 ng · d/mL, respectively. The C(max) (T(max)) of DEX in plasma was 1.11 ng/mL (day 60). Compared with the level in the control eyes (no DEX implant), CYP3A8 expression in the retina was upregulated threefold up to 6 months after injection of the implant (0.969 ± 0.0565 vs. 3.07 ± 0.438; P < 0.05 up to 2-month samples). The in vivo release profile of the DEX implant in an animal eye was similar to the pharmacokinetics achieved with pulse administration of corticosteroids (high initial drug concentration, followed by a prolonged period of low concentration). These results are consistent with those in clinical studies supporting the use of the DEX implant for the extended management of posterior segment diseases.

Anat Loewenstein,  Ramin Tadayoni,  Michael Larsen … (2017)
Diabetic retinal disease is envisioned to become the plague of the coming decades with a steep increase of worldwide diabetes incidence followed by a substantial rise in retinal disease. Improvements in diagnostic and therapeutic care have to cope with this dilemma in a clinically and socioeconomically efficient manner. Laser treatment has found a less destructive competitor in pharmacological treatments. As a consequence of recent rigorous clinical trials, laser photocoagulation is no longer recommended for the treatment of diabetic macular edema (DME), and anti-vascular endothelial growth factor therapy has emerged as first-line therapy. Steroids have maintained a role in the management of chronically persistent DME. The paradigm shifts in therapy are accompanied by a substantial break-through in diagnostics. The following guidance for the management of DME has been composed from the best updated knowledge of leading experts in Europe and represents another volume in the series of EURETINA recommendations for the management of retinal disease.

Ranjan Rajendram,  Samantha Fraser-Bell,  Andrew Kaines … (2012)
To report the 2-year outcomes of the BOLT study, a prospective randomized controlled trial evaluating intravitreous bevacizumab and modified Early Treatment Diabetic Retinopathy Study (ETDRS) macular laser therapy (MLT) in patients with persistent clinically significant macular edema (CSME). In a 2-year, single-center, randomized controlled trial, 80 patients with center-involving CSME and visual acuity of 20/40 to 20/320 were randomized to receive either bevacizumab or MLT. difference in ETDRS best-corrected visual acuity (BCVA) between arms. mean change in BCVA, proportion gaining at least 15 and at least 10 ETDRS letters, losing fewer than 15 and at least 30 letters, change in central macular thickness, ETDRS retinopathy severity, and safety outcomes. At 2 years, mean (SD) ETDRS BCVA was 64.4 (13.3) (ETDRS equivalent Snellen fraction: 20/50) in the bevacizumab arm and 54.8 (12.6) (20/80) in the MLT arm (P=.005). The bevacizumab arm gained a median of 9 ETDRS letters vs 2.5 letters for MLT (P=.005), with a mean gain of 8.6 letters for bevacizumab vs amean loss of 0.5 letters for MLT. Forty-nine percent of patients gained 10 or more letters (P=.001) and 32% gained at least 15 letters (P=.004) for bevacizumab vs 7% and 4% for MLT. Percentage who lost fewer than 15 letters in the MLT arm was 86% vs 100% for bevacizumab (P=.03). Mean reduction in central macular thickness was 146 μm in the bevacizumab arm vs 118 μm in the MLT arm. The median number of treatments over 24 months was 13 for bevacizumab and 4 for MLT. This study provides evidence supporting longer-term use of intravitreous bevacizumab for persistent center-involving CSME. Improvements in BCVA and central macular thickness seen with bevacizumab at 1 year were maintained over the second year with a mean of 4 injections. eudract.ema.europa.eu Identifier: 2007-000847-89