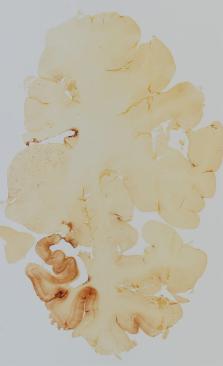 Extensive exposure of boxers to neurotrauma in the early 20th century led to the so-called punch drunk syndrome, which was formally recognized in the medical literature in 1928. “Punch drunk” terminology was replaced by the less derisive ‘dementia pugilistica’ in 1937. In the early case material, the diagnosis of dementia pugilistica required neurological deficits, including slurring dysarthria, ataxia, pyramidal signs, extrapyramidal signs, memory impairment, and personality changes, although the specific clinical substrate has assumed lesser importance in recent years with a shift in focus on molecular pathogenesis. The postmortem neuropathology of dementia pugilistica has also evolved substantially over the past 90 years, from suspected concussion-related hemorrhages to diverse structural and neurofibrillary changes to geographic tauopathy. Progressive neurodegenerative tauopathy is among the prevailing theories for disease pathogenesis currently, although this may be overly simplistic. Careful examination of historical cases reveals both misdiagnoses and a likelihood that dementia pugilistica at that time was caused by cumulative structural brain injury. More recent neuropathological studies indicate subclinical and possibly static tauopathy in some athletes and non-athletes. Indeed, it is unclear from the literature whether retired boxers reach the inflection point that tends toward progressive neurodegeneration in the manner of Alzheimer’s disease due to boxing. Even among historical cases with extreme levels of exposure, progressive disease was exceptional.

Immunization with amyloid-beta attenuates Alzheimer-disease-like pathology in the PDAPP mouse.

Dale Schenk, Robin Barbour, Whitney Dunn … (1999)
Amyloid-beta peptide (Abeta) seems to have a central role in the neuropathology of Alzheimer's disease (AD). Familial forms of the disease have been linked to mutations in the amyloid precursor protein (APP) and the presenilin genes. Disease-linked mutations in these genes result in increased production of the 42-amino-acid form of the peptide (Abeta42), which is the predominant form found in the amyloid plaques of Alzheimer's disease. The PDAPP transgenic mouse, which overexpresses mutant human APP (in which the amino acid at position 717 is phenylalanine instead of the normal valine), progressively develops many of the neuropathological hallmarks of Alzheimer's disease in an age- and brain-region-dependent manner. In the present study, transgenic animals were immunized with Abeta42, either before the onset of AD-type neuropathologies (at 6 weeks of age) or at an older age (11 months), when amyloid-beta deposition and several of the subsequent neuropathological changes were well established. We report that immunization of the young animals essentially prevented the development of beta-amyloid-plaque formation, neuritic dystrophy and astrogliosis. Treatment of the older animals also markedly reduced the extent and progression of these AD-like neuropathologies. Our results raise the possibility that immunization with amyloid-beta may be effective in preventing and treating Alzheimer's disease.

Joseph Ojo, Benoit Mouzon, Moustafa Algamal … (2016)
Exposure to repetitive mild traumatic brain injury (mTBI) is a risk factor for chronic traumatic encephalopathy, which is characterized by patchy deposition of hyperphosphorylated tau aggregates in neurons and astrocytes at the depths of cortical sulci. We developed an mTBI paradigm to explore effects of repetitive concussive-type injury over several months in mice with a human tau genetic background (hTau). Two injuries were induced in the hTau mice weekly over a period of 3 or 4 months and the effects were compared with those in noninjured sham animals. Behavioral and in vivo measures and detailed neuropathological assessments were conducted 6 months after the first injury. Our data confirm impairment in cerebral blood flow and white matter damage. This was accompanied by a 2-fold increase in total tau levels and mild increases in tau oligomers/conformers and pTau (Thr231) species in brain gray matter. There was no evidence of neurofibrillary/astroglial tangles, neuropil threads, or perivascular foci of tau immunoreactivity. There were neurobehavioral deficits (ie, disinhibition and impaired cognitive performance) in the mTBI animals. These data support the relevance of this new mTBI injury model for studying the consequences of chronic repetitive mTBI in humans, and the role of tau in TBI.