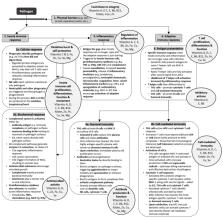 Immune support by micronutrients is historically based on vitamin C deficiency and supplementation in scurvy in early times. It has since been established that the complex, integrated immune system needs multiple specific micronutrients, including vitamins A, D, C, E, B6, and B12, folate, zinc, iron, copper, and selenium, which play vital, often synergistic roles at every stage of the immune response. Adequate amounts are essential to ensure the proper function of physical barriers and immune cells; however, daily micronutrient intakes necessary to support immune function may be higher than current recommended dietary allowances. Certain populations have inadequate dietary micronutrient intakes, and situations with increased requirements (e.g., infection, stress, and pollution) further decrease stores within the body. Several micronutrients may be deficient, and even marginal deficiency may impair immunity. Although contradictory data exist, available evidence indicates that supplementation with multiple micronutrients with immune-supporting roles may modulate immune function and reduce the risk of infection. Micronutrients with the strongest evidence for immune support are vitamins C and D and zinc. Better design of human clinical studies addressing dosage and combinations of micronutrients in different populations are required to substantiate the benefits of micronutrient supplementation against infection.

Jian Wang,  Kostas Pantopoulos (2011)
Iron is an essential but potentially hazardous biometal. Mammalian cells require sufficient amounts of iron to satisfy metabolic needs or to accomplish specialized functions. Iron is delivered to tissues by circulating transferrin, a transporter that captures iron released into the plasma mainly from intestinal enterocytes or reticuloendothelial macrophages. The binding of iron-laden transferrin to the cell-surface transferrin receptor 1 results in endocytosis and uptake of the metal cargo. Internalized iron is transported to mitochondria for the synthesis of haem or iron–sulfur clusters, which are integral parts of several metalloproteins, and excess iron is stored and detoxified in cytosolic ferritin. Iron metabolism is controlled at different levels and by diverse mechanisms. The present review summarizes basic concepts of iron transport, use and storage and focuses on the IRE (iron-responsive element)/IRP (iron-regulatory protein) system, a well known post-transcriptional regulatory circuit that not only maintains iron homoeostasis in various cell types, but also contributes to systemic iron balance.

The Epidemiology of Global Micronutrient Deficiencies

Regan L. Bailey (corresponding) ,  Keith P. West Jr,  Robert E Black (2015)
Micronutrients are essential to sustain life and for optimal physiological function. Widespread global micronutrient deficiencies (MNDs) exist, with pregnant women and their children under 5 years at the highest risk. Iron, iodine, folate, vitamin A, and zinc deficiencies are the most widespread MNDs, and all these MNDs are common contributors to poor growth, intellectual impairments, perinatal complications, and increased risk of morbidity and mortality. Iron deficiency is the most common MND worldwide and leads to microcytic anemia, decreased capacity for work, as well as impaired immune and endocrine function. Iodine deficiency disorder is also widespread and results in goiter, mental retardation, or reduced cognitive function. Adequate zinc is necessary for optimal immune function, and deficiency is associated with an increased incidence of diarrhea and acute respiratory infections, major causes of death in those <5 years of age. Folic acid taken in early pregnancy can prevent neural tube defects. Folate is essential for DNA synthesis and repair, and deficiency results in macrocytic anemia. Vitamin A deficiency is the leading cause of blindness worldwide and also impairs immune function and cell differentiation. Single MNDs rarely occur alone; often, multiple MNDs coexist. The long-term consequences of MNDs are not only seen at the individual level but also have deleterious impacts on the economic development and human capital at the country level. Perhaps of greatest concern is the cycle of MNDs that persists over generations and the intergenerational consequences of MNDs that we are only beginning to understand. Prevention of MNDs is critical and traditionally has been accomplished through supplementation, fortification, and food-based approaches including diversification. It is widely accepted that intervention in the first 1,000 days is critical to break the cycle of malnutrition; however, a coordinated, sustainable commitment to scaling up nutrition at the global level is still needed. Understanding the epidemiology of MNDs is critical to understand what intervention strategies will work best under different conditions.

Zinc and immune function: the biological basis of altered resistance to infection.

A. H. Shankar,  A. Prasad (1998)
Zinc is known to play a central role in the immune system, and zinc-deficient persons experience increased susceptibility to a variety of pathogens. The immunologic mechanisms whereby zinc modulates increased susceptibility to infection have been studied for several decades. It is clear that zinc affects multiple aspects of the immune system, from the barrier of the skin to gene regulation within lymphocytes. Zinc is crucial for normal development and function of cells mediating nonspecific immunity such as neutrophils and natural killer cells. Zinc deficiency also affects development of acquired immunity by preventing both the outgrowth and certain functions of T lymphocytes such as activation, Th1 cytokine production, and B lymphocyte help. Likewise, B lymphocyte development and antibody production, particularly immunoglobulin G, is compromised. The macrophage, a pivotal cell in many immunologic functions, is adversely affected by zinc deficiency, which can dysregulate intracellular killing, cytokine production, and phagocytosis. The effects of zinc on these key immunologic mediators is rooted in the myriad roles for zinc in basic cellular functions such as DNA replication, RNA transcription, cell division, and cell activation. Apoptosis is potentiated by zinc deficiency. Zinc also functions as an antioxidant and can stabilize membranes. This review explores these aspects of zinc biology of the immune system and attempts to provide a biological basis for the altered host resistance to infections observed during zinc deficiency and supplementation.