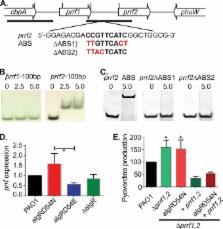 Pseudomonas aeruginosa employs numerous, complex regulatory elements to control expression of its many virulence systems. The P. aeruginosa AlgZR two-component regulatory system controls the expression of several crucial virulence phenotypes. We recently determined, through transcriptomic profiling of a PAO1 Δ algR mutant strain compared to wild-type PAO1, that algZR and hemCD are cotranscribed and show differential iron-dependent gene expression. Previous expression profiling was performed in strains without algR and revealed that AlgR acts as either an activator or repressor, depending on the gene. Thus, examination of P. aeruginosa gene expression from cells locked into different AlgR phosphorylation states reveals greater physiological relevance. Therefore, gene expression from strains carrying algR alleles encoding a phosphomimetic (AlgR D54E) or a phosphoablative (AlgR D54N) form were compared by microarray to PAO1. Transcriptome analyses of these strains revealed 25 differentially expressed genes associated with iron siderophore biosynthesis or heme acquisition or production. The PAO1 algR D54N mutant produced lower levels of pyoverdine but increased expression of the small RNAs prrf1 and prrf2 compared to PAO1. In contrast, the algR D54N mutant produced more pyocyanin than wild-type PAO1. On the other hand, the PAO1 algR D54E mutant produced higher levels of pyoverdine, likely due to increased expression of an iron-regulated gene encoding the sigma factor pvdS, but it had decreased pyocyanin production. AlgR specifically bound to the prrf2 and pvdS promoters in vitro. AlgR-dependent pyoverdine production was additionally influenced by carbon source rather than the extracellular iron concentration per se. AlgR phosphorylation effects were also examined in a Drosophila melanogaster feeding, murine acute pneumonia, and punch wound infection models. Abrogation of AlgR phosphorylation attenuated P. aeruginosa virulence in these infection models. These results show that the AlgR phosphorylation state can directly, as well as indirectly, modulate the expression of iron acquisition genes that may ultimately impact the ability of P. aeruginosa to establish and maintain an infection.

P Goudreau,  U. Stock,  V Robinson (1999)
Most prokaryotic signal-transduction systems and a few eukaryotic pathways use phosphotransfer schemes involving two conserved components, a histidine protein kinase and a response regulator protein. The histidine protein kinase, which is regulated by environmental stimuli, autophosphorylates at a histidine residue, creating a high-energy phosphoryl group that is subsequently transferred to an aspartate residue in the response regulator protein. Phosphorylation induces a conformational change in the regulatory domain that results in activation of an associated domain that effects the response. The basic scheme is highly adaptable, and numerous variations have provided optimization within specific signaling systems. The domains of two-component proteins are modular and can be integrated into proteins and pathways in a variety of ways, but the core structures and activities are maintained. Thus detailed analyses of a relatively small number of representative proteins provide a foundation for understanding this large family of signaling proteins.

Universal chemical assay for the detection and determination of siderophores.

J Neilands,  B Schwyn,  Torsten Neilands (1986)
A universal method to detect and determine siderophores was developed by using their high affinity for iron(III). The ternary complex chrome azurol S/iron(III)/hexadecyltrimethylammonium bromide, with an extinction coefficient of approximately 100,000 M-1 cm-1 at 630 nm, serves as an indicator. When a strong chelator removes the iron from the dye, its color turns from blue to orange. Because of the high sensitivity, determination of siderophores in solution and their characterization by paper electrophoresis chromatography can be performed directly on supernatants of culture fluids. The method is also applicable to agar plates. Orange halos around the colonies on blue agar are indicative of siderophore excretion. It was demonstrated with Escherichia coli strains that biosynthetic, transport, and regulatory mutations in the enterobactin system are clearly distinguishable. The method was successfully used to screen mutants in the iron uptake system of two Rhizobium meliloti strains, DM5 and 1021.

D Essar,  L Eberly,  A Hadero … (1990)
Two anthranilate synthase gene pairs have been identified in Pseudomonas aeruginosa. They were cloned, sequenced, inactivated in vitro by insertion of an antibiotic resistance gene, and returned to P. aeruginosa, replacing the wild-type gene. One anthranilate synthase enzyme participates in tryptophan synthesis; its genes are designated trpE and trpG. The other anthranilate synthase enzyme, encoded by phnA and phnB, participates in the synthesis of pyocyanin, the characteristic phenazine pigment of the organism. trpE and trpG are independently transcribed; homologous genes have been cloned from Pseudomonas putida. The phenazine pathway genes phnA and phnB are cotranscribed. The cloned phnA phnB gene pair complements trpE and trpE(G) mutants of Escherichia coli. Homologous genes were not found in P. putida PPG1, a non-phenazine producer. Surprisingly, PhnA and PhnB are more closely related to E. coli TrpE and TrpG than to Pseudomonas TrpE and TrpG, whereas Pseudomonas TrpE and TrpG are more closely related to E. coli PabB and PabA than to E. coli TrpE and TrpG. We replaced the wild-type trpE on the P. aeruginosa chromosome with a mutant form having a considerable portion of its coding sequence deleted and replaced by a tetracycline resistance gene cassette. This resulted in tryptophan auxotrophy; however, spontaneous tryptophan-independent revertants appeared at a frequency of 10(-5) to 10(6). The anthranilate synthase of these revertants is not feedback inhibited by tryptophan, suggesting that it arises from PhnAB. phnA mutants retain a low level of pyocyanin production. Introduction of an inactivated trpE gene into a phnA mutant abolished residual pyocyanin production, suggesting that the trpE trpG gene products are capable of providing some anthranilate for pyocyanin synthesis.