Revision of Nagiella Munroe (Lepidoptera, Crambidae), with the description of a new species from China 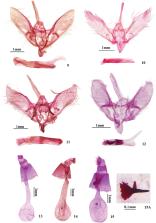 The genus Nagiella was studied using morphological and DNA barcode data. Nagiella bispina sp. nov. is described as a new species, and N. hortulatoides Munroe is recorded in China for the first time. The diagnosis of this genus is revised, and the genitalia description of N. quadrimaculalis (Kollar and Redtenbacher) and N. inferior (Hampson) are given in English for the first time. Nosophora incomitata (Swinhoe) stat. rev. is removed from the synonym of N. quadrimaculalis . Photographs of the habitus and genitalia as well as COI DNA Barcode data of these four species are provided.

Mehrdad Hajibabaei,  Winnie Hallwachs,  Paul Hebert … (2006)
Although central to much biological research, the identification of species is often difficult. The use of DNA barcodes, short DNA sequences from a standardized region of the genome, has recently been proposed as a tool to facilitate species identification and discovery. However, the effectiveness of DNA barcoding for identifying specimens in species-rich tropical biotas is unknown. Here we show that cytochrome c oxidase I DNA barcodes effectively discriminate among species in three Lepidoptera families from Area de Conservación Guanacaste in northwestern Costa Rica. We found that 97.9% of the 521 species recognized by prior taxonomic work possess distinctive cytochrome c oxidase I barcodes and that the few instances of interspecific sequence overlap involve very similar species. We also found two or more barcode clusters within each of 13 supposedly single species. Covariation between these clusters and morphological and/or ecological traits indicates overlooked species complexes. If these results are general, DNA barcoding will significantly aid species identification and discovery in tropical settings.

Methods and techniques of specimens of Microlepidopera.

The phylogenetic systematics of Spilomelinae and Pyraustinae (Lepidoptera: Pyraloidea: Crambidae) inferred from DNA and morphology