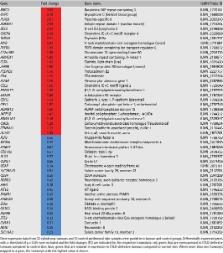 Journal: The Journal of Pathology

Cutaneous cylindroma is an adnexal tumour with apocrine differentiation. A predisposition to multiple cylindromas is seen in patients with Brooke–Spiegler syndrome, who carry germline mutations in the tumour suppressor gene CYLD . Previous studies of inherited cylindromas have highlighted the frequent presence of bi‐allelic truncating CYLD mutations as a recurrent driver mutation. We have previously shown that sporadic cylindromas express either MYB–NFIB fusion transcripts or show evidence of MYB activation in the absence of such fusions. Here, we investigated inherited cylindromas from several families with germline CYLD mutations for the presence of MYB activation. Strikingly, none of the inherited CYLD ‐defective ( n = 23) tumours expressed MYB–NFIB fusion transcripts. However, MYB expression was increased in the majority of tumours (69%) and global gene expression analysis revealed that well‐established MYB target genes were up‐regulated in CYLD ‐defective tumours. Moreover, knock‐down of MYB expression caused a significant reduction in cylindroma cell proliferation, suggesting that MYB is also a key player and oncogenic driver in inherited cylindromas. Taken together, our findings suggest molecular heterogeneity in the pathogenesis of sporadic and inherited cutaneous cylindromas, with convergence on MYB activation. © 2016 The Authors. The Journal of Pathology published by John Wiley & Sons Ltd on behalf of Pathological Society of Great Britain and Ireland.

Alexander Pfeifer,  Katharina Hennecke,  Katarzyna Chmielarska Masoumi … (2006)
Mutations in the CYLD gene cause tumors of hair-follicle keratinocytes. The CYLD gene encodes a deubiquitinase that removes lysine 63-linked ubiquitin chains from TRAF2 and inhibits p65/p50 NF-kappaB activation. Here we show that mice lacking Cyld are highly susceptible to chemically induced skin tumors. Cyld-/- tumors and keratinocytes treated with 12-O-tetradecanoylphorbol-13 acetate (TPA) or UV light are hyperproliferative and have elevated cyclin D1 levels. The cyclin D1 elevation is caused not by increased p65/p50 action but rather by increased nuclear activity of Bcl-3-associated NF-kappaB p50 and p52. In Cyld+/+ keratinocytes, TPA or UV light triggers the translocation of Cyld from the cytoplasm to the perinuclear region, where Cyld binds and deubiquitinates Bcl-3, thereby preventing nuclear accumulation of Bcl-3 and p50/Bcl-3- or p52/Bcl-3-dependent proliferation. These data indicate that, depending on the external signals, Cyld can negatively regulate different NF-kappaB pathways; inactivation of TRAF2 controls survival and inflammation, while inhibition of Bcl-3 controls proliferation and tumor growth.

Laura Mudie,  Patrick Tarpey,  Peter Loo … (2013)
Adenoid cystic carcinoma (ACC) is a rare malignancy that can occur in multiple organ sites and is primarily found in the salivary gland. While the identification of recurrent fusions of the MYB-NFIB genes have begun to shed light on the molecular underpinnings, little else is known about the molecular genetics of this frequently fatal cancer. We have undertaken exome sequencing in a series of 24 ACC to further delineate the genetics of the disease. We identified multiple mutated genes that, combined, implicate chromatin deregulation in half of cases. Further, mutations were identified in known cancer genes, including PIK3CA, ATM, CDKN2A, SF3B1, SUFU, TSC1, and CYLD. Mutations in NOTCH1/2 were identified in 3 cases, and we identify the negative NOTCH signaling regulator, SPEN, as a new cancer gene in ACC with mutations in 5 cases. Finally, the identification of 3 likely activating mutations in the tyrosine kinase receptor FGFR2, analogous to those reported in ovarian and endometrial carcinoma, point to potential therapeutic avenues for a subset of cases.

Ramin Massoumi (2010)
The tumor suppressor CYLD is a deubiquitylating enzyme that negatively regulates different signaling pathways by removing lysine 63-linked polyubiquitin chains from several specific substrates. In various tumor types, CYLD loss can lead to cell survival or cell proliferation. In addition to its loss due to mutations, CYLD expression can also be decreased through transcriptional and post-transcriptional regulatory mechanisms. Moreover, as epigenetic repression of CYLD can affect tumor progression in different cancer types, the activation of the CYLD promoter ensures the tight control of an inflammatory response. Recent work also shows that CYLD activity can be governed by different regulatory mechanisms including phosphorylation, thus providing another layer of control for diverse physiological processes. Copyright 2010 Elsevier Ltd. All rights reserved.