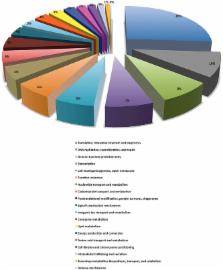 The genus Lactobacillus includes a diverse group of bacteria consisting of many species that are associated with fermentations of plants, meat or milk. In addition, various lactobacilli are natural inhabitants of the intestinal tract of humans and other animals. Finally, several Lactobacillus strains are marketed as probiotics as their consumption can confer a health benefit to host. Presently, 154 Lactobacillus species are known and a growing fraction of these are subject to draft genome sequencing. However, complete genome sequences are needed to provide a platform for detailed genomic comparisons. Therefore, we selected a total of 20 genomes of various Lactobacillus strains for which complete genomic sequences have been reported. These genomes had sizes varying from 1.8 to 3.3 Mb and other characteristic features, such as G+C content that ranged from 33% to 51%. The Lactobacillus pan genome was found to consist of approximately 14 000 protein‐encoding genes while all 20 genomes shared a total of 383 sets of orthologous genes that defined the Lactobacillus core genome (LCG). Based on advanced phylogeny of the proteins encoded by this LCG, we grouped the 20 strains into three main groups and defined core group genes present in all genomes of a single group, signature group genes shared in all genomes of one group but absent in all other Lactobacillus genomes, and Group‐specific ORFans present in core group genes of one group and absent in all other complete genomes. The latter are of specific value in defining the different groups of genomes. The study provides a platform for present individual comparisons as well as future analysis of new Lactobacillus genomes.

Willem Stiekema,  Robert Kerkhoven,  Oscar P. Kuipers … (2003)
The 3,308,274-bp sequence of the chromosome of Lactobacillus plantarum strain WCFS1, a single colony isolate of strain NCIMB8826 that was originally isolated from human saliva, has been determined, and contains 3,052 predicted protein-encoding genes. Putative biological functions could be assigned to 2,120 (70%) of the predicted proteins. Consistent with the classification of L. plantarum as a facultative heterofermentative lactic acid bacterium, the genome encodes all enzymes required for the glycolysis and phosphoketolase pathways, all of which appear to belong to the class of potentially highly expressed genes in this organism, as was evident from the codon-adaptation index of individual genes. Moreover, L. plantarum encodes a large pyruvate-dissipating potential, leading to various end-products of fermentation. L. plantarum is a species that is encountered in many different environmental niches, and this flexible and adaptive behavior is reflected by the relatively large number of regulatory and transport functions, including 25 complete PTS sugar transport systems. Moreover, the chromosome encodes >200 extracellular proteins, many of which are predicted to be bound to the cell envelope. A large proportion of the genes encoding sugar transport and utilization, as well as genes encoding extracellular functions, appear to be clustered in a 600-kb region near the origin of replication. Many of these genes display deviation of nucleotide composition, consistent with a foreign origin. These findings suggest that these genes, which provide an important part of the interaction of L. plantarum with its environment, form a lifestyle adaptation region in the chromosome.

Matti Kankainen,  W Vos,  Airi Palva … (2009)
To unravel the biological function of the widely used probiotic bacterium Lactobacillus rhamnosus GG, we compared its 3.0-Mbp genome sequence with the similarly sized genome of L. rhamnosus LC705, an adjunct starter culture exhibiting reduced binding to mucus. Both genomes demonstrated high sequence identity and synteny. However, for both strains, genomic islands, 5 in GG and 4 in LC705, punctuated the colinearity. A significant number of strain-specific genes were predicted in these islands (80 in GG and 72 in LC705). The GG-specific islands included genes coding for bacteriophage components, sugar metabolism and transport, and exopolysaccharide biosynthesis. One island only found in L. rhamnosus GG contained genes for 3 secreted LPXTG-like pilins (spaCBA) and a pilin-dedicated sortase. Using anti-SpaC antibodies, the physical presence of cell wall-bound pili was confirmed by immunoblotting. Immunogold electron microscopy showed that the SpaC pilin is located at the pilus tip but also sporadically throughout the structure. Moreover, the adherence of strain GG to human intestinal mucus was blocked by SpaC antiserum and abolished in a mutant carrying an inactivated spaC gene. Similarly, binding to mucus was demonstrated for the purified SpaC protein. We conclude that the presence of SpaC is essential for the mucus interaction of L. rhamnosus GG and likely explains its ability to persist in the human intestinal tract longer than LC705 during an intervention trial. The presence of mucus-binding pili on the surface of a nonpathogenic Gram-positive bacterial strain reveals a previously undescribed mechanism for the interaction of selected probiotic lactobacilli with host tissues.

EDGAR: A software framework for the comparative analysis of prokaryotic genomes

Jochen Blom,  Stefan P Albaum,  Daniel Doppmeier … (2009)
Background The introduction of next generation sequencing approaches has caused a rapid increase in the number of completely sequenced genomes. As one result of this development, it is now feasible to analyze large groups of related genomes in a comparative approach. A main task in comparative genomics is the identification of orthologous genes in different genomes and the classification of genes as core genes or singletons. Results To support these studies EDGAR – "Efficient Database framework for comparative Genome Analyses using BLAST score Ratios" – was developed. EDGAR is designed to automatically perform genome comparisons in a high throughput approach. Comparative analyses for 582 genomes across 75 genus groups taken from the NCBI genomes database were conducted with the software and the results were integrated into an underlying database. To demonstrate a specific application case, we analyzed ten genomes of the bacterial genus Xanthomonas, for which phylogenetic studies were awkward due to divergent taxonomic systems. The resultant phylogeny EDGAR provided was consistent with outcomes from traditional approaches performed recently and moreover, it was possible to root each strain with unprecedented accuracy. Conclusion EDGAR provides novel analysis features and significantly simplifies the comparative analysis of related genomes. The software supports a quick survey of evolutionary relationships and simplifies the process of obtaining new biological insights into the differential gene content of kindred genomes. Visualization features, like synteny plots or Venn diagrams, are offered to the scientific community through a web-based and therefore platform independent user interface , where the precomputed data sets can be browsed.