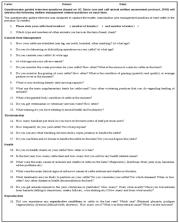 It is not feasible to transfer animal welfare assessment protocols developed for intensive systems to extensive systems or from rangeland- to pasture-based cattle because each system needs a different protocol. In a previous study, we combined selected measures from the Welfare Quality protocol for beef cattle and the UC Davis Cow-Calf Health and Handling protocol with additional measures specific to New Zealand to create a welfare assessment protocol for pasture-based cow–calf systems that had 50 measures. In this study, the feasibility of this protocol was assessed during routine yardings of cows and a questionnaire. Individual measures that were deemed unsuitable were eliminated or modified. At the end of the process, a robust, achievable protocol with 32 measures for use on pasture-based extensive cow–calf farms was created.

Potential measures suitable for assessing welfare in pasture-based beef cow–calf systems in New Zealand were identified from Welfare Quality and UC Davis Cow-Calf protocols. These were trialled on a single farm and a potential protocol of 50 measures created. The aim of this study was to assess the feasibility of the measures included in this protocol on multiple farms in order, to develop a credible animal welfare assessment protocol for pasture-based cow–calf farms systems in New Zealand. The assessment protocol was trialled on 25 farms over two visits and took a total of 2.5 h over both visits for a 100-cow herd. The first visit in autumn included an animal welfare assessment of 3366 cows during pregnancy scanning, while the second visit in winter included a questionnaire-guided interview to assess cattle management and health, and a farm resource evaluation. Through a process of eliminating unsuitable measures, adjustments of modifiable measures and retaining feasible measures, a protocol with 32 measures was created. The application of the protocol on the farms showed that not all measures are feasible for on-farm assessment, and categorisation of identified animal welfare measures into scores that indicate a threshold of acceptable and non-acceptable welfare standards is necessary.

D Ganskopp (2001)
Several of the problems associated with grazing animals in extensive settings are related to their uneven patterns of use across the landscape. After fencing, water and salt are two of the most frequently used tools for affecting cattle distribution in extensive settings. Cattle are attracted to water in arid regions, but mixed results have been obtained with salt and mineral supplements. The goal of this study was to evaluate the efficacies of salt and water manipulations for affecting cattle distribution in large (>825ha) pastures. This was accomplished by fitting cattle with global positioning system (GPS) collars and monitoring their travels and activities in a three pasture, Latin-square design where water and salt shared a common location and water or salt were moved individually to distant areas. Mean distance of cattle from water (&xmacr;=1.16km) was unaffected by treatments (P=0.79) suggesting that cattle followed movements of water tanks. Distance traveled daily (&xmacr;=5.78km), time devoted to grazing (11.0h per day), time devoted to resting (10.1h per day), and the area (&xmacr;=325ha) of minimum convex polygons were also unaffected by treatment implying that cattle did not compensate for separated water and salting areas with increased travels or disruptions of habitual grazing and resting activities. Centers of activity for cattle shifted further (P=0.02) when water (&xmacr;=1.49km) was moved than when salt (&xmacr;=1.00km) was relocated. Mean distance of cattle from salt increased from 1.03km, when salt and water were together, to 1.73km (P=0.08) when salt and water were separated. This implied that cattle made less effort to remain near salt. Also, when water and salt were separated, cattle were found within 250m of water 354 times and close to salt only 38 times. Movement of drinking water to distant points in pastures was the most effective tool for altering cattle distribution. When cattle and salt were introduced to a new portion of a pasture, cattle used the new area for about 2 days, and then began drifting back toward previously used portions of the pasture. Manipulations of salting stations will not significantly rectify serious livestock distribution problems in extensive arid-land pastures.