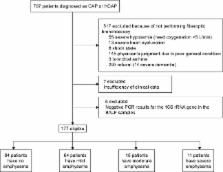 Pulmonary emphysema is an important radiological finding in chronic obstructive pulmonary disease patients, but bacteriological differences in pneumonia patients according to the severity of emphysematous changes have not been reported. Therefore, we evaluated the bacteriological incidence in the bronchoalveolar lavage fluid (BALF) of pneumonia patients using cultivation and a culture-independent molecular method. Japanese patients with community-acquired pneumonia (83) and healthcare-associated pneumonia (94) between April 2010 and February 2014 were evaluated. The BALF obtained from pneumonia lesions was evaluated by both cultivation and a molecular method. In the molecular method, ~600 base pairs of bacterial 16S ribosomal RNA genes in the BALF were amplified by polymerase chain reaction, and clone libraries were constructed. The nucleotide sequences of 96 randomly selected colonies were determined, and a homology search was performed to identify the bacterial species. A qualitative radiological evaluation of pulmonary emphysema based on chest computed tomography (CT) images was performed using the Goddard classification. The severity of pulmonary emphysema based on the Goddard classification was none in 47.4% (84/177), mild in 36.2% (64/177), moderate in 10.2% (18/177), and severe in 6.2% (11/177). Using the culture-independent molecular method, Moraxella catarrhalis was significantly more frequently detected in moderate or severe emphysema patients than in patients with no or mild emphysematous changes. The detection rates of Haemophilus influenzae and Pseudomonas aeruginosa were unrelated to the severity of pulmonary emphysematous changes, and Streptococcus species – except for the S. anginosus group and S. pneumoniae – were detected more frequently using the molecular method we used for the BALF of patients with pneumonia than using culture methods. Our findings suggest that M. catarrhalis is more frequently detected in pneumonia patients with moderate or severe emphysema than in those with no or mild emphysematous changes on chest CT. M. catarrhalis may play a major role in patients with pneumonia complicating severe pulmonary emphysema.

R Stockley,  E Sapey (2006)
Exacerbations of COPD are thought to be caused by complex interactions between the host, bacteria, viruses, and environmental pollution. These factors increase the inflammatory burden in the lower airways, overwhelming the protective anti-inflammatory defences leading to tissue damage. Frequent exacerbations are associated with increased morbidity and mortality, a faster decline in lung function, and poorer health status, so prevention or optimal treatment of exacerbations is a global priority. In order to evolve new treatment strategies there has been great interest in the aetiology and pathophysiology of exacerbations, but progress has been hindered by the heterogeneous nature of these episodes, vague definitions of an exacerbation, and poor stratification of known confounding factors when interpreting results. We review how an exacerbation should be defined, its inflammatory basis, and the importance of exacerbations on disease progression. Important aetiologies, with their potential underlying mechanisms, are discussed and the significance of each aetiology is considered.

Sanjum Sethi,  George Murphy (2001)
Chronic obstructive pulmonary disease (COPD) is the fourth leading cause of death in the United States. The precise role of bacterial infection in the course and pathogenesis of COPD has been a source of controversy for decades. Chronic bacterial colonization of the lower airways contributes to airway inflammation; more research is needed to test the hypothesis that this bacterial colonization accelerates the progressive decline in lung function seen in COPD (the vicious circle hypothesis). The course of COPD is characterized by intermittent exacerbations of the disease. Studies of samples obtained by bronchoscopy with the protected specimen brush, analysis of the human immune response with appropriate immunoassays, and antibiotic trials reveal that approximately half of exacerbations are caused by bacteria. Nontypeable Haemophilus influenzae, Moraxella catarrhalis, and Streptococcus pneumoniae are the most common causes of exacerbations, while Chlamydia pneumoniae causes a small proportion. The role of Haemophilus parainfluenzae and gram-negative bacilli remains to be established. Recent progress in studies of the molecular mechanisms of pathogenesis of infection in the human respiratory tract and in vaccine development guided by such studies promises to lead to novel ways to treat and prevent bacterial infections in COPD.