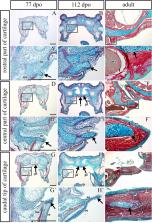 Cilia and Hedgehog responsiveness in the mouse.

Danwei Huangfu,  James V. Anderson (2005)
The intraflagellar transport (IFT) proteins Ift172/Wimple and Polaris/Ift88 and the anterograde IFT motor kinesin-II are required for the production and maintenance of cilia. These proteins are also required for the activation of targets of the mouse Hedgehog (Hh) pathway by Gli transcription factors. The phenotypes of the IFT mutants, however, are not identical to mutants that lack Smoothened (Smo), an essential activator of the Hh pathway. We show here that mouse embryos that lack both Ift172 and Smo are identical to Ift172 single mutants, which indicates that Ift172 acts downstream of Smo. Ift172 mutants have a weaker neural patterning phenotype than Smo mutants, because Ift172, but not Smo, is required for proteolytic processing of Gli3 to its repressor form. Dnchc2 and Kif3a, essential subunits of the retrograde and anterograde IFT motors, are also required for both formation of Gli activator and proteolytic processing of Gli3. As a result, IFT mutants display a loss of Hh signaling phenotype in the neural tube, where Gli activators play the major role in pattern formation, and a gain of Hh signaling phenotype in the limb, where Gli3 repressor plays the major role. Because both anterograde and retrograde IFT are essential for positive and negative responses to Hh, and because cilia are present on Hh responsive cells, it is likely that cilia act as organelles that are required for all activity of the mouse Hh pathway.

S Wang,  N Wheatley,  G Strugnell (1995)
Mammalian cells in vivo frequently express primary cilia. Although some fully differentiated cell types rarely, if ever, express them, most do, indicating that they are regular cell organelles. Their expression can also be explored in vitro, where conditions--physical and chemical, intrinsic and extrinsic--permit experimental approaches which give far greater control than in vivo. This 'state of the art' paper covers briefly the general biology of primary cilia, highlights the current situation with regard to our understanding of their relevance and importance in cell biology from various facets of our recent research, much of it in collaboration with other laboratories world-wide, and outline future work aimed at answering some basic and applied questions about them, within a context of an increasing awareness that signalling between cells is of the utmost importance in understanding proliferation control and its value in cancer research, the major remit of this unit.