Prevalence of Hypertension and Its Associated Factors among Indonesian Adolescents 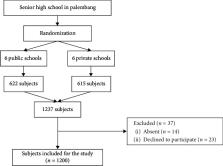 This was a cross-sectional study conducted at twelve senior high schools in Palembang, South Sumatera, Indonesia, from June to December 2019. The study included adolescents aged 13 to 18 years old. Anthropometric measurements were obtained. Multiple logistic regression was used to assess the risk factors most associated with hypertension among adolescents, and then an equation model was created. The prevalence of hypertension was evaluated, together with several factors such as age group, sex, ethnicity, family history of hypertension, nutritional status, physical activity, perceived stress, sleep duration, nutritional intake, and smoking.

In total, 1200 adolescents aged 15.9 ± 0.99 years were evaluated. The prevalence of hypertension and elevated blood pressure among adolescents was 8% and 12.2%, respectively. There were significant associations between sex, family history of hypertension, hypertensive father, nutritional status, physical activity, perceived stress, and hypertension among Indonesian adolescents ( p < 0.05). Stress was the most powerful risk factor of hypertension with an odds ratio of 5.83 (95% confidence interval 2.91–11.6).

S Threefoot,  G Berenson,  W Bao … (1995)
It is well known that blood pressure (BP) levels persist over time. The present investigation examines tracking of elevated BP from childhood to adulthood and its progression to essential hypertension. In a community study of early natural history of arteriosclerosis and essential hypertension, a longitudinal cohort was constructed from two cross-sectional surveys > 15 years apart: 1505 individuals (56% female subjects, 35% black), aged 5 to 14 years at initial study. Persistence of BP was shown by significant correlations between childhood and adulthood levels (r = 0.36 to 0.50 for systolic BP and r = 0.20 to 0.42 for diastolic BP), varying by race, sex, and age. These correlations remained the same after controlling for body mass index (BMI). Twice the expected number of subjects (40% for systolic BP and 37% for diastolic BP), whose levels were in the highest quintile at childhood, remained there 15 years later. Furthermore, of the childhood characteristics, baseline BP level was most predictive of the follow-up level, followed by change in BMI. Subsequently, even at ages 20 to 31 years, prevalence of clinically diagnosed hypertension was much higher in subjects whose childhood BP was in the top quintile: 3.6 times (18% v 5%) as high in systolic BP and 2.6 times (15% v 5.8%) as high in diastolic BP, compared to subjects in every other quintile. Of the 116 subjects who developed hypertension, 48% and 41% had elevated childhood systolic and diastolic BP, respectively.(ABSTRACT TRUNCATED AT 250 WORDS)

Pedro M. R. Reis,  Ciro Romélio Rodriguez-Añez,  Adriano Hino (2009)
The perceived stress scale (PSS-10) reliability and validity were evaluated in Brazilian adults. A two-stage translation procedure was employed to achieve a Portuguese version. Participants were 793 Brazilian university teachers. The exploratory factor analysis showed two factors with eigenvalues greater than 1.0 (56.8% of variance). The Cronbach's alpha coefficients were 0.83 (Factor 1), 0.77 (Factor 2) and 0.87 (Total Score). The test-retest reliability scores were 0.83 (Factor 1), 0.68 (Factor 2) and 0.86 (Total Score). PSS-10 and perceived health correlations ranged from -0.22 to -0.35. The PSS-10 showed an adequate reliability and validity supporting its use in this population.

Hypertension in children and adolescents.

Roseann Spiotta,  Gregory Luma (2006)
The development of a national database on normative blood pressure levels throughout childhood has contributed to the recognition of elevated blood pressure in children and adolescents. The epidemic of childhood obesity, the risk of developing left ventricular hypertrophy, and evidence of the early development of atherosclerosis in children would make the detection of and intervention in childhood hypertension important to reduce long-term health risks; however, supporting data are lacking. Secondary hypertension is more common in preadolescent children, with most cases caused by renal disease. Primary or essential hypertension is more common in adolescents and has multiple risk factors, including obesity and a family history of hypertension. Evaluation involves a thorough history and physical examination, laboratory tests, and specialized studies. Management is multifaceted. Nonpharmacologic treatments include weight reduction, exercise, and dietary modifications. Recommendations for pharmacologic treatment are based on symptomatic hypertension, evidence of end-organ damage, stage 2 hypertension, stage 1 hypertension unresponsive to lifestyle modifications, and hypertension with diabetes mellitus.